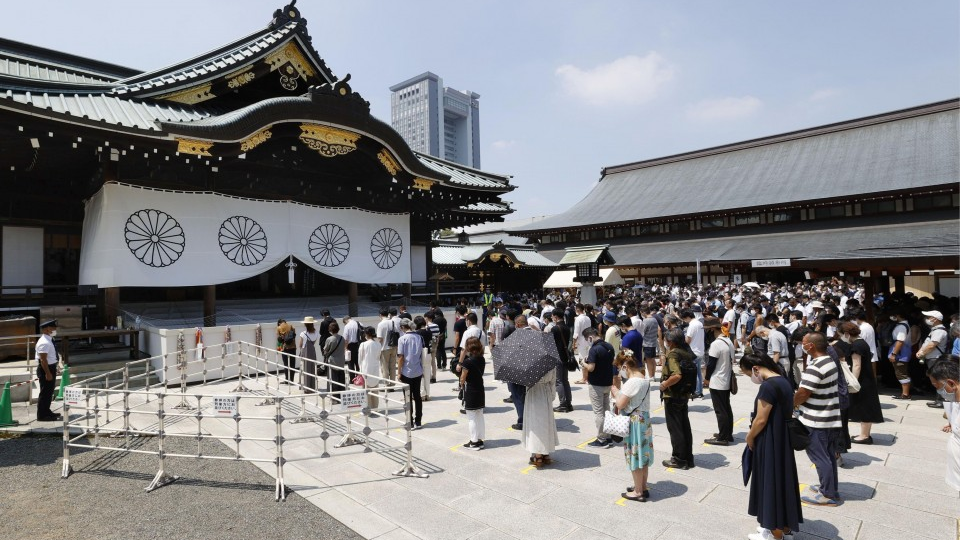 People maintain social distancing amid the coronavirus pandemic while praying at Tokyo's Yasukuni shrine, seen by Japan's neighbors as a symbol of its past militarism, on Aug. 15, 2020, as the country marks 75 years since its surrender in World War II. (Kyodo)

TOKYO - Four members of Prime Minister Shinzo Abe's Cabinet visited the Yasukuni shrine, seen by Japan's neighbors as a symbol of its past militarism, as the country marked the anniversary of its surrender in World War II on Saturday, while Abe himself sent a ritual offering.

Environment Minister Shinjiro Koizumi was the first Cabinet member to visit the shrine on Aug. 15 since 2016. He was followed by education minister Koichi Hagiuda, Seiichi Eto, minister in charge of territorial issues, and internal affairs minister Sanae Takaichi.

Abe refrained from visiting the Shinto shrine in central Tokyo, which honors convicted war criminals along with millions of war dead, for the eighth year in a row, choosing to lay flowers at the nearby Chidorigafuchi National Cemetery.

Past visits by prime ministers to Yasukuni have drawn a strong backlash from the international community. Abe's only outing while in office, in December 2013, dealt a blow to already strained ties with China and South Korea, which suffered at the hands of Japan in the lead-up to and during the war.

It also prompted key ally the United States to voice its disappointment, with media reports at the time saying Abe ignored a request by then-Vice President Joe Biden, now the presumptive Democratic presidential candidate, to forgo a visit. 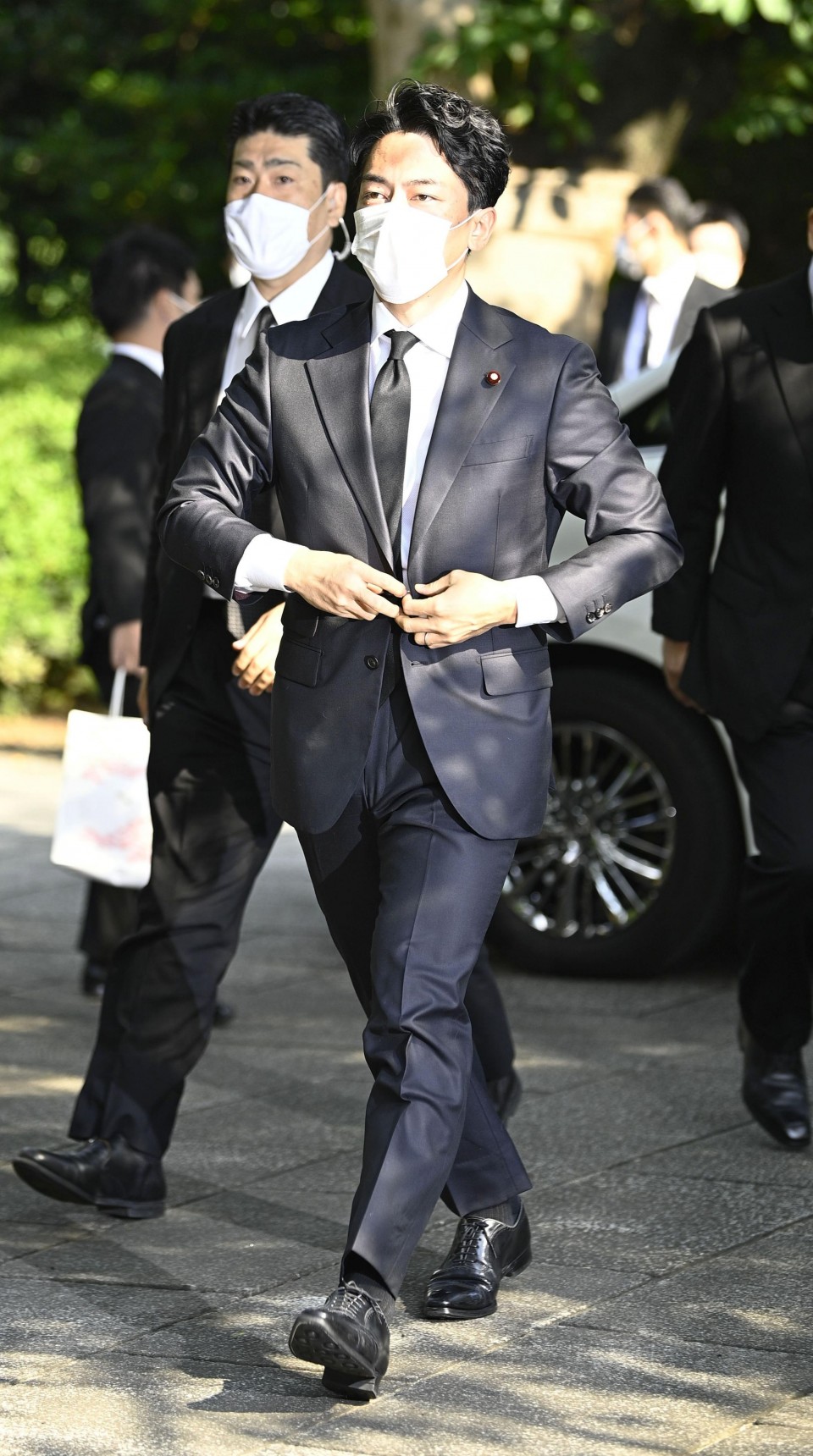 Abe's offering, made in his capacity as leader of the Liberal Democratic Party with money out of his own pocket, was delivered Saturday morning by his aide and LDP lawmaker Shuichi Takatori. Takatori told reporters Abe made the donation with "respect and gratitude for the war dead who laid the groundwork for peace."

South Korea's Foreign Ministry issued a statement voicing "deep disappointment and concern" over their visits and calling on Japanese leaders to show sincere remorse for the past.

Members of the public also paid their respects at Yasukuni on the 75th anniversary of Japan's surrender, braving the sweltering heat and forming long lines with extra space between people as a precaution against spreading the novel coronavirus.

A cross-party group of conservative lawmakers who usually pay their respects together on key dates said they will not do so on Saturday because of the pandemic, which has seen a resurgence in the capital in recent weeks.

Established in 1869 to commemorate those that gave their lives for Japan, Yasukuni in 1978 added wartime Prime Minister Gen. Hideki Tojo and other convicted war criminals to the more than 2.4 million war dead enshrined there.

By not visiting the shrine, Abe likely sought to avoid another flare-up between Japan and China at a time when the recent improvement in bilateral ties is being tested by Beijing's sending of ships into Japanese territorial waters in the East China Sea and its introduction of a widely criticized national security law in Hong Kong.

Japan's relations with South Korea, meanwhile, remain at the lowest point in years amid a feud over compensation for wartime labor and tightened export controls.

South Korea's top court in October 2018 ordered a Japanese steelmaker to pay four Korean men 100 million won ($84,000) each for forced labor under Japanese colonial rule between 1910 and 1945. Similar rulings have since followed.

Japan argues the rulings violate an agreement reached when the countries normalized ties in 1965, under which it provided South Korea with $500 million in grants and low-interest loans with the understanding that the issue of wartime compensation would be resolved "completely and finally."

Tensions between the countries further escalated after Japan in July 2019 tightened controls on exports of three materials crucial to South Korean manufacturers of semiconductors and display panels. Seoul says the move was politically motivated and has filed a complaint with the World Trade Organization. 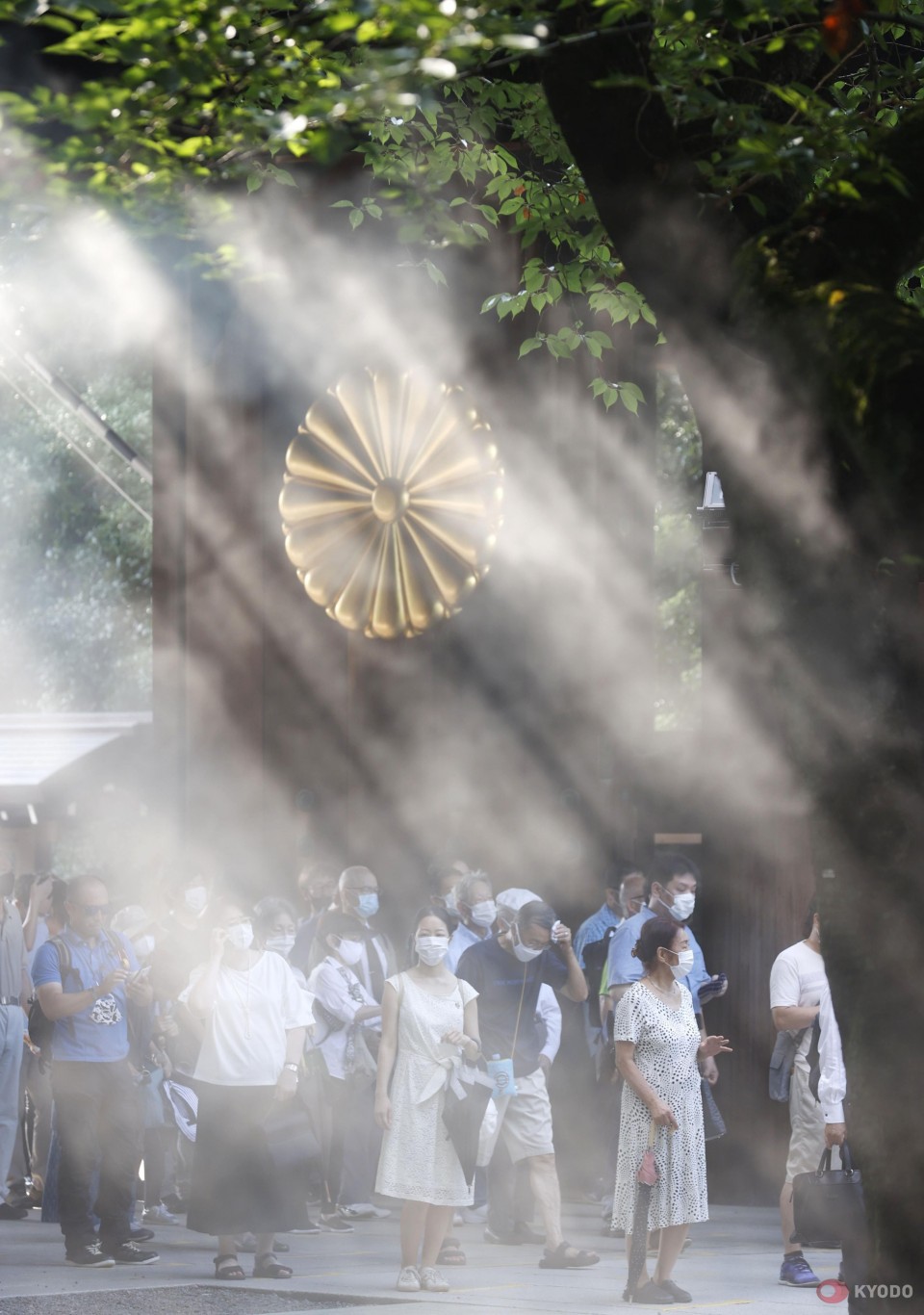