All annual visa-free visits to Russian-held isles off Hokkaido that are claimed by Japan will likely be canceled this year due to the novel coronavirus pandemic, a group of Japanese former residents of the isles said Monday. 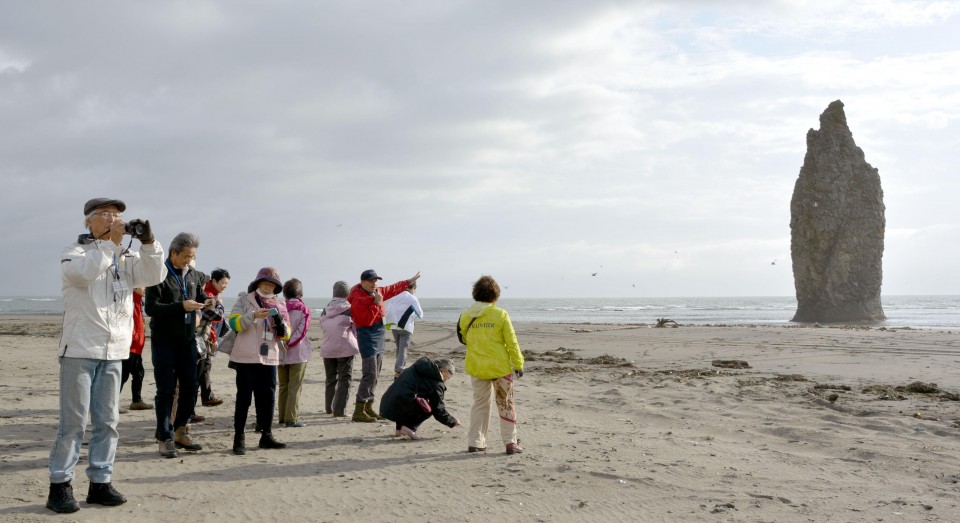 A group of Japanese tourists visit a sightseeing spot on Kunashiri Island on Oct. 30, 2019. (Kyodo)

The group has already canceled its six visa-free travel programs scheduled this year that would have allowed them to visit their former places of residence and decided to abort the last one to Etorofu, one of the four disputed islands, slated for Sept. 25 to 28, according to the group.

The visa-free programs allow groups of Japanese nationals to travel to the disputed islands, called the Northern Territories in Japan and the Southern Kurils in Russia, without passports or visas.

The Soviet Union seized the islands, also including Kunashiri, Shikotan and the Habomai islet chain, following Japan's surrender in World War II in 1945. Moscow says it acquired them as a legitimate outcome of the war, while Tokyo argues their seizure was illegal.

There are three categories under the visa-free program and a total of 19 visits had been scheduled between May and September this year, including those in the two other categories -- visiting ancestors' graves and exchanges with Russian people.

Hideaki Miyakawa, a senior member of the group of former residents and their descendants, said it was impossible to remove the risk of coronavirus infection while traveling by sea.

"It is regrettable, but I hope we can visit there next year as we previously did," he said.

Meanwhile, the Hokkaido prefectural government is considering chartering a plane to be flown near the disputed isles in October to November so respects can be paid to the islanders' ancestors from the air, according to local officials.

Japan is struggling to resolve the long-standing territorial dispute with Russia, which has prevented the two countries from signing a postwar peace treaty.

Since returning to power in 2012, Prime Minister Shinzo Abe, who has announced his intention to step down, was eager to advance bilateral talks, meeting with Russian President Vladimir Putin 27 times.