Rookie Rui Hachimura scored a team-high 23 points Friday but could not rescue the Washington Wizards from a 118-107 defeat against the New Orleans Pelicans that ended their hopes of reaching the NBA playoffs.

Hachimura, the Wizards' 2019 first-round pick, hit a three-pointer in the first minute of the game before connecting on his next three field-goal attempts on the way to a 15-point first half. 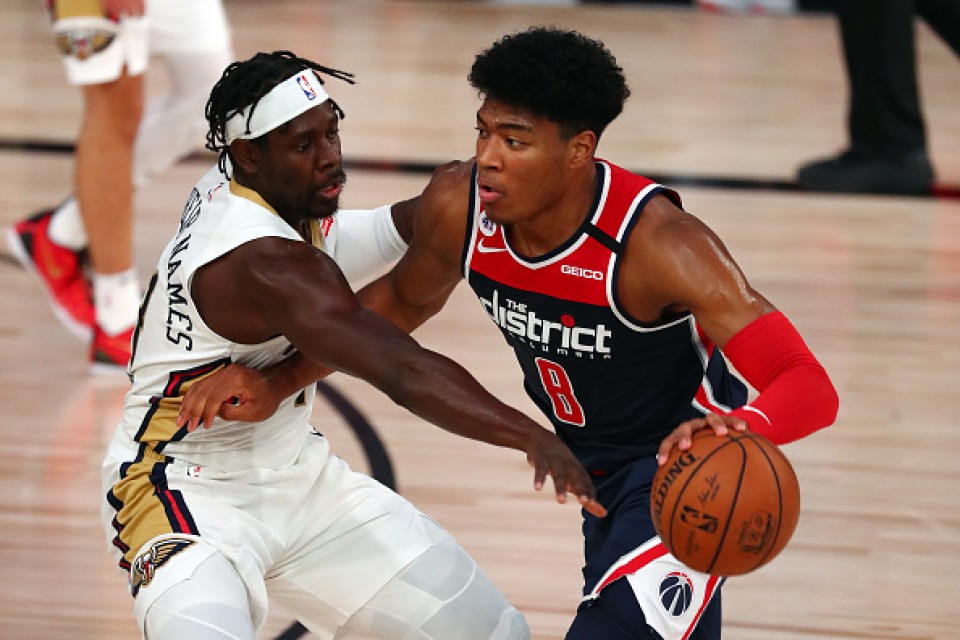 Rui Hachimura #8 of the Washington Wizards drives against Jrue Holiday #11 of the New Orleans Pelicans during the second quarter in an NBA basketball game at Visa Athletic Center at ESPN Wide World Of Sports Complex on August 7, 2020 in Lake Buena Vista, Florida.(Pool/Getty/Kyodo)

The 22-year-old, who reached double figures for the first time in four games, also added six rebounds for the game.

Thomas Bryant and Troy Brown added 22 and 20, respectively, but the Wizards could not hang on to a lead which had been as much as nine points.

Jrue Holiday led the way for the Pelicans with a game-high 28 points.

The defeat was the final nail in the 10th-place Wizards' playoff aspirations, having lost all five of their games since the NBA's restart at the Disney-owned ESPN Wide World of Sports complex in Florida.

With three games remaining, the eighth and final playoff spot in the Eastern Conference is out of reach.

"I was determined to be aggressive on both offense and defense from the start," Hachimura said. "I'll do everything I can to win at least a game and end my rookie season on a high."

Yuta Watanabe, who is playing on a two-way contract with the Memphis Grizzlies, made his first appearance following the restart, tallying four points and one rebound in a four-minute cameo as his team beat the Oklahoma City Thunder 121-92 for its first win in five games.