The government said Tuesday 98.6 percent of households in Japan have received the one-off 100,000 yen ($940) cash handouts meant to help cushion the economic fallout from the novel coronavirus pandemic that has continued to linger, with Tokyo seeing 182 new daily cases of the virus.

The government has completed handing out the money to approximately 58.26 million households, equivalent to 12.55 trillion yen, or 98.5 percent, of the budget for the project, according to the Ministry of Internal Affairs and Communications. 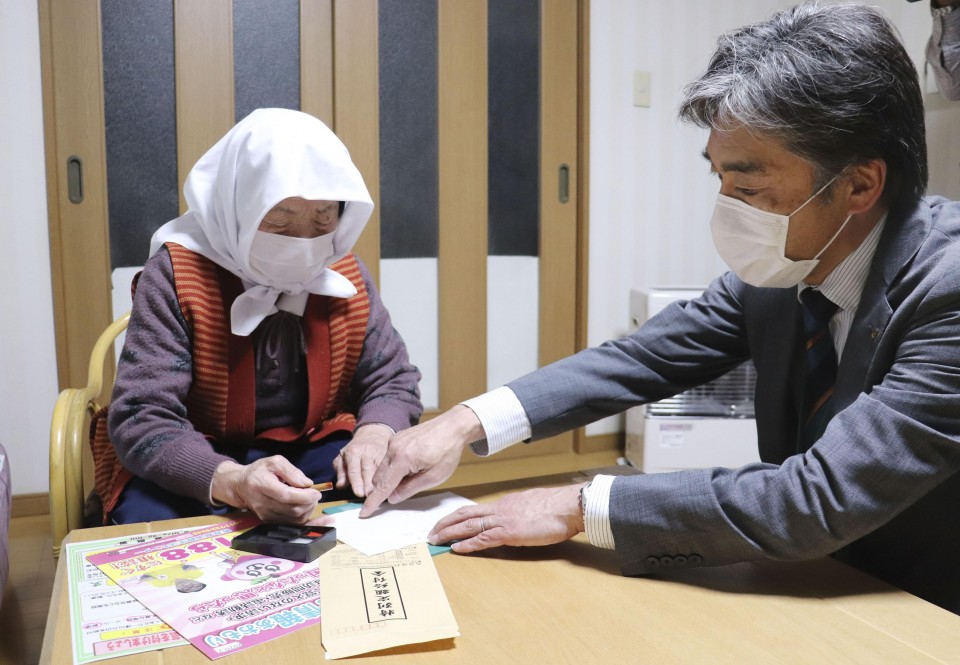 A woman receives 100,000 yen in cash from an official of the Nishimeya village government in Aomori Prefecture, northeastern Japan, on April 30, 2020. (Kyodo)

In principle, the head of a household receives the total amount of the cash handouts for family members transferred to his or her bank account.

Residents in Japan were able to apply for the handouts for three months from when the municipalities they live in began accepting applications, with many reaching their deadline by the end of August.

Tokyo has seen new infections in triple digits for almost the entire month, except for Monday. Although the capital has experienced a daily record of 472 on Aug. 1, the number of cases has been on a decline since mid-August.

The Tokyo metropolitan government's single-day figure of 182 new cases, confirmed Tuesday, now brings the cumulative total in the capital to 19,610.

The figure is nearly double the 95 reported the previous day, which was the lowest daily figure since July 8 when 75 infections were reported.

The daily figures reported by the metropolitan government reflect the most recent totals reported by health authorities and medical institutions.

Tokyo is maintaining its alert at the highest of four levels, meaning "infections are spreading." It has requested establishments serving alcohol and karaoke venues to close by 10 p.m. until the end of August to reduce the risk of infections.

The measures come as the capital is trying to strike a balance between restarting the economy and controlling infections.

The central government's requests for people to stay at home and nonessential businesses to suspend operations had dealt a blow to the economy.

Originally, the ruling Liberal Democratic Party planned to deliver 300,000 yen to households whose income had fallen sharply as part of an emergency policy package approved by the Cabinet on April 7.

It was replaced with a plan to distribute 100,000 yen in cash handouts the following week amid public criticism over the initial plan's strict eligibility requirements.