A South Korean court on Tuesday became able to order the sale of assets belonging to a Japanese steelmaker over a 2018 top court wartime labor compensation order that has roiled ties between the two countries.

In June, the Daegu District Court's Pohang branch formally informed Nippon Steel Corp. of its decision to seize some of its assets in South Korea. The decision went into effect at midnight Monday as a South Korean court decision can be considered to have been delivered to a defendant after a certain period of time following a formal notice. 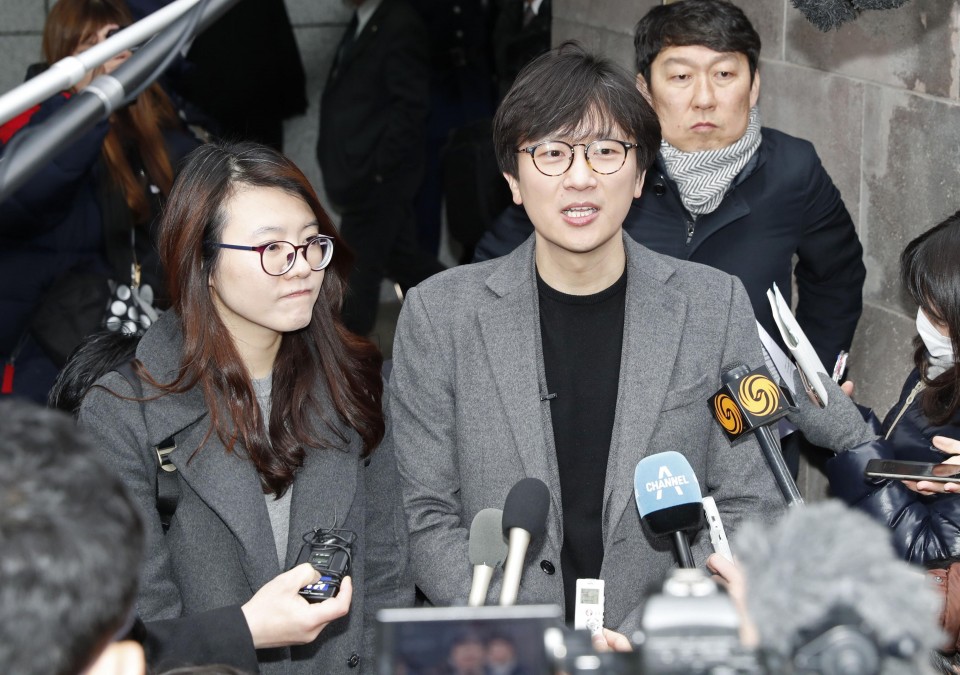 Lawyers for South Koreans who won a wartime forced labor case against Nippon Steel Corp. speak to reporters on Feb. 15, 2019 in front of the company's head office in Tokyo. (Kyodo)

The court is expected to begin considering in earnest ordering the assets' sale to pay four Korean plaintiffs the 100 million won ($84,000) each that the Supreme Court found they are entitled to receive in damages.

Nippon Steel issued a statement on Tuesday that it plans to file an immediate appeal over the court's asset seizure. It has one week to do so before the seizure is finalized.

A lawyer for the plaintiffs, Lim Jae Sung, criticized Japan's plan, calling it a move taken only to delay the asset seizure.

"To make an immediate appeal, there has to be some hint of violation of the law, which does not exist in the legal process that we are taking," Lim told a radio broadcaster.

It is expected to take at least several months before the assets can be liquidated upon a court order and proceeds from the sale can be paid to the plaintiffs. But Tuesday's development has taken the already chilled Japanese-South Korean ties closer to a precipice.

Japanese Chief Cabinet Secretary Yoshihide Suga told reporters on Tuesday that Tokyo will "continue to firmly handle" the matter while keeping "a range of options" in mind.

South Korean Foreign Ministry spokesman Kim In Chul, in his regular briefing, said the government is closely monitoring all aspects of the situation and is keeping the door open for every possible measure that it could take.

Japan has taken the position that the issue of claims stemming from its 1910-1945 colonial rule of the Korean Peninsula has been settled under a bilateral accord signed alongside a 1965 treaty that established diplomatic ties. And it has warned that Tokyo will retaliate in the event the business interests of Japanese firms are harmed.

South Korea, for its part, is said to be considering taking tit-for-tat measures. South Korean media reported Tuesday that the government is considering those which "correspond to" Japanese measures taken in retaliation.

Tokyo is reported to be weighing toughening visa requirements for South Korean visitors, temporarily recalling its ambassador from Seoul, imposing additional tariffs on South Korean products and restricting remittances to South Korea, among other measures.

The district court has decided to seize some of Nippon Steel's assets in South Korea after it failed to pay damages to the plaintiffs following an October 2018 Supreme Court ruling that found the men were mobilized to work for Japan Iron & Steel Co., Nippon Steel's forerunner, in the 1940s while the Korean Peninsula was under Japanese colonial rule.

The company did not comply with the compensation order in accordance with the Japanese government's stance on the matter.

As a result, the plaintiffs had a portion of the company's shares in POSCO-Nippon Steel RHF Joint Venture, a joint venture with South Korean steelmaker POSCO, seized via the court and in May 2019 asked the court to order the sale of the shares.

Mitsubishi Heavy Industries Ltd. is also among the Japanese companies whose assets have been seized in South Korea in connection with wartime labor compensation claims. The country's top court in November 2018 ordered the company to pay compensation to former laborers.