Japan's summer holiday season started quietly on Saturday, with no congestion at stations and airports after local governments asked residents to avoid travelling to help keep the coronavirus spread from worsening.

Some shinkensen bullet trains saw only 5 percent of their nonreserved seats filled in the morning with the highest rate limited to 70 percent, compared to well above the 100 percent usually seen on the first day of Japan's Bon holiday period. 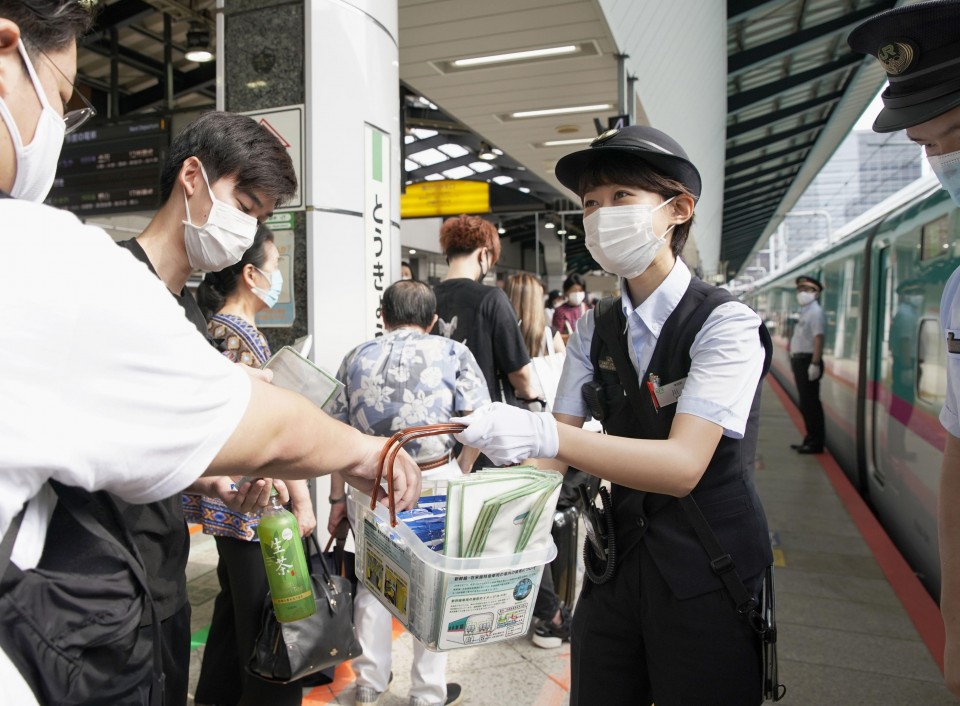 A station worker (R) distributes sanitizing sheets to passengers on a shinkansen bullet train platform of JR Tokyo Station on Aug. 8, 2020, as people head to their hometowns to spend the summer vacation amid the continued spread of the novel coronavirus. (Kyodo)

"To be honest, I was a little worried because I saw debates (on whether to travel) during this period on TV news programs," said a 49-year-old man who was taking a shinkansen from Osaka Prefecture to Fukuoka Prefecture.

The number of seats booked for shinkansen bullet trains between Friday and Aug. 17 plunged 79 percent from a year earlier, while reservations for domestic and international flights for Friday to Aug. 16 dropped 60 percent and 97 percent, respectively, according to train operators and airlines.

The summer holiday comes amid a travel subsidy campaign launched by the central government on July 22 to help revive the domestic tourism industry, which has been hit hard by the virus outbreak.

The central government has no intention of requesting people to hold off on trips to their hometowns and elsewhere during the summer holiday, even though the virus has continued to spread in parts of the country.

But governors of prefectures hit hard by a recent surge in infections, including Tokyo Gov. Yuriko Koike, have requested residents to refrain from traveling across prefectural borders, as they fear the move of people could spread the virus further.

Japan has seen a resurgence in infections after a nationwide state of emergency was lifted by late May, led by a sharp rise in infections in the capital and other urban areas. 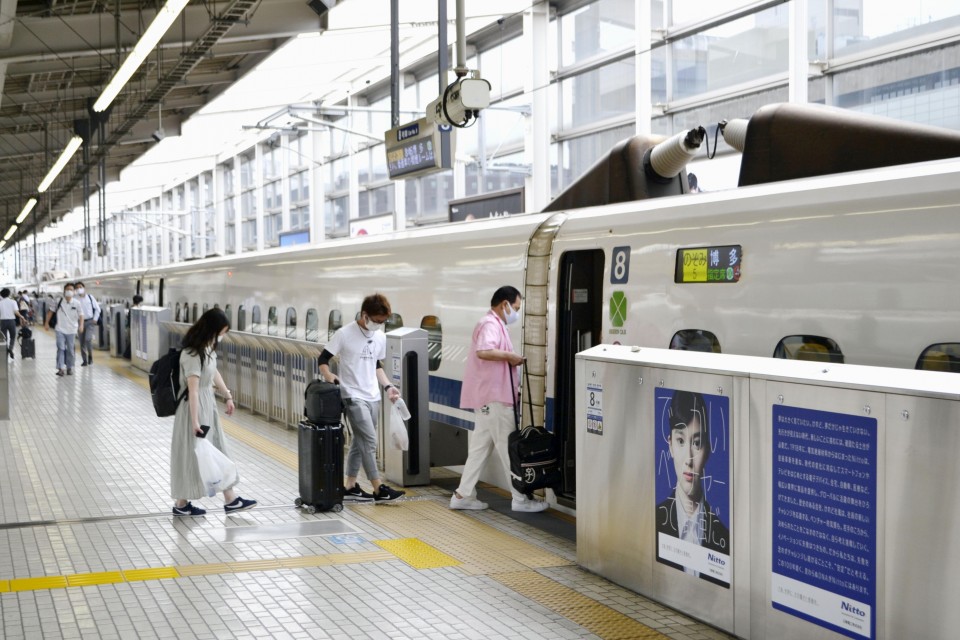 Passengers get on a shinkansen bullet train at JR Kyoto Station on Aug. 8, 2020, as people head to their hometowns to spend the summer vacation amid the continued spread of the novel coronavirus in Japan. (Kyodo)

She will visit her hometown in Osaka Prefecture and neighboring Wakayama Prefecture with her son.

A 25-year-old man living in Misato, also in Saitama, said he decided to travel to help the tourism industry.

"As this summer is different, I hope my trip can help even a little to support struggling people working in the tourism industry," he said.

As airlines have drastically reduced services amid the virus spread, flight schedule boards showed a number of canceled flights at Narita airport, east of Tokyo.

A 39-year-old woman from Fujisawa, Kanagawa Prefecture, was waiting for a flight to Germany to meet her fiance.

"I'm looking forward to meeting with him but also concerned because I will be quarantined upon returning to Japan," she said.