Shohei Ohtani ripped a two-run homer to tie the game Monday as the Los Angeles Angels came back to beat the division-leading Oakland Athletics 10-9 and snap a three-game losing skid.

Ohtani evened things up at 9-9 in bottom of the sixth with his fourth homer of the season, connecting on his first pitch from right-hander Lou Trivino with a runner on first and one out.

Following his 2-for-3 performance Sunday, Ohtani finished with his second multi-hit outing in a row. He doubled off T.J. McFarland in a three-run fourth that saw the Angels claw their way back to a 7-9 deficit.

Mike Trout led the Angels' offense, going 4-for-5 with two homers, including the go-ahead run off Yusmeiro Petit (1-1) in the eighth after Ohtani tied things up. The three-time American League MVP also blasted a two-run shot during the fourth-inning rally. 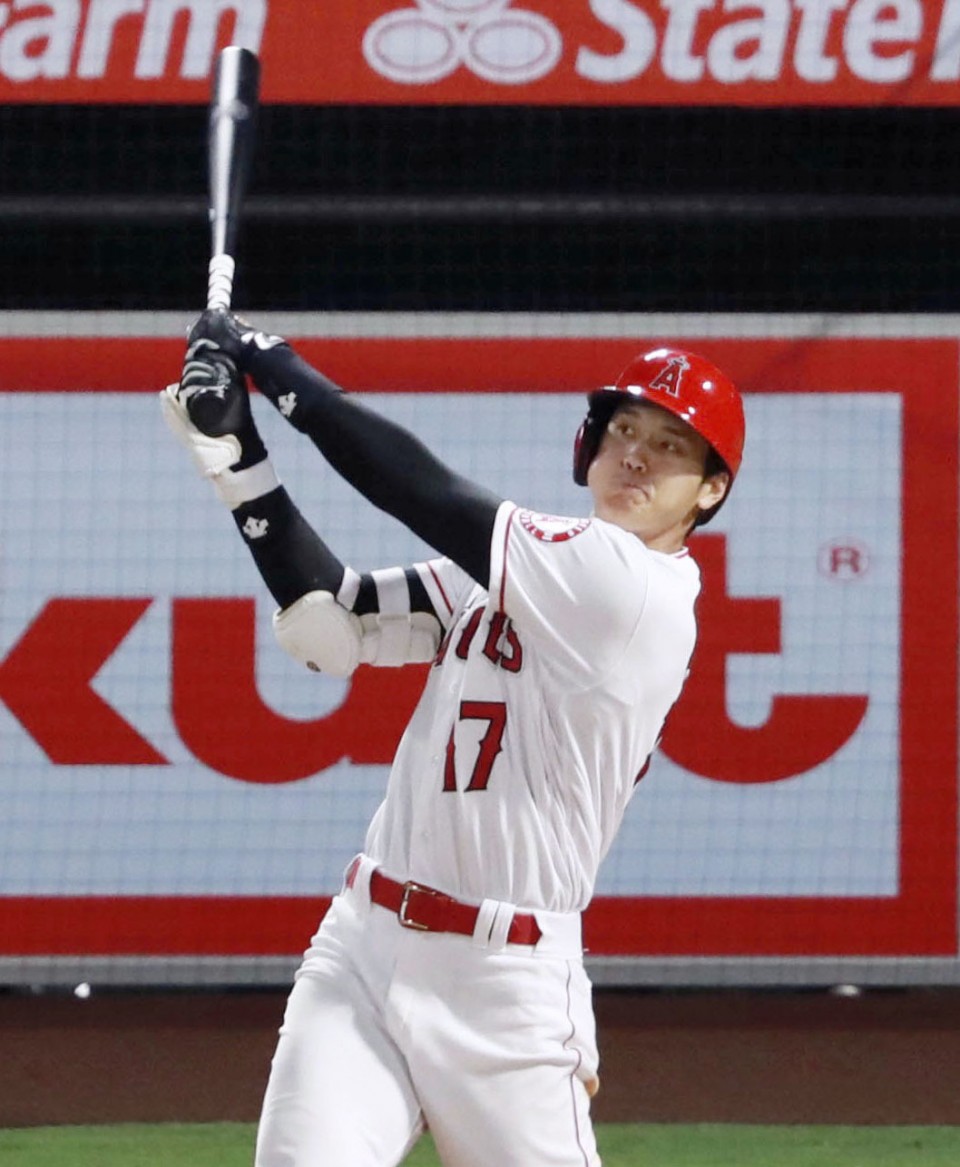 Shohei Ohtani of the Los Angeles Angels hits a two-run homer in the sixth inning of a game against the Oakland Athletics on Aug. 10, 2020, in Anaheim, California. (Kyodo)

Right-handed reliever Felix Pena (1-0) got the win after retiring all three batters he faced in the eighth inning.

"I felt my condition (on swings) improving from yesterday, although it's only gradual," said Ohtani, who also drew a walk to go 2-for-4 with one run batting fifth as designated hitter.

"It was nice to have a good swing on the first pitch (on the homer)."

The two-way star will not pitch again this season after he was diagnosed with a grade 1-2 strain of the flexor pronator mass in his right forearm on Aug. 2 following his second start of the year.

But he has the all-clear to continue hitting, as the injury does not affect the left-handed batter's swing.

Rookie Yoshitomo Tsutsugo had his first hit in six games as the Tampa Bay Rays shrugged off the Boston Red Sox 8-7 at Fenway Park.

With the game tied 5-5 in the seventh, he led off a two-run inning for the Rays with a single to right off Jeffrey Springs.

The Rays took a decisive 8-5 lead on Manuel Margot's RBI double in the eighth. Tsutsugo finished 1-for-4 with two runs.