New light is being shone on the British royal family's 400-year association with Japan after fresh research into their extensive holdings of artworks.

Curators have been studying more than one thousand Japanese pieces and, for the first time, have been able to establish the provenance of several key items thanks to new information.

Many of the standout objects in the collection are gifts to mark visits, coronations and treaties. Direct interaction between rulers only really happened after Japan reopened to the West in the 1850s after a period of seclusion from the 1630s. 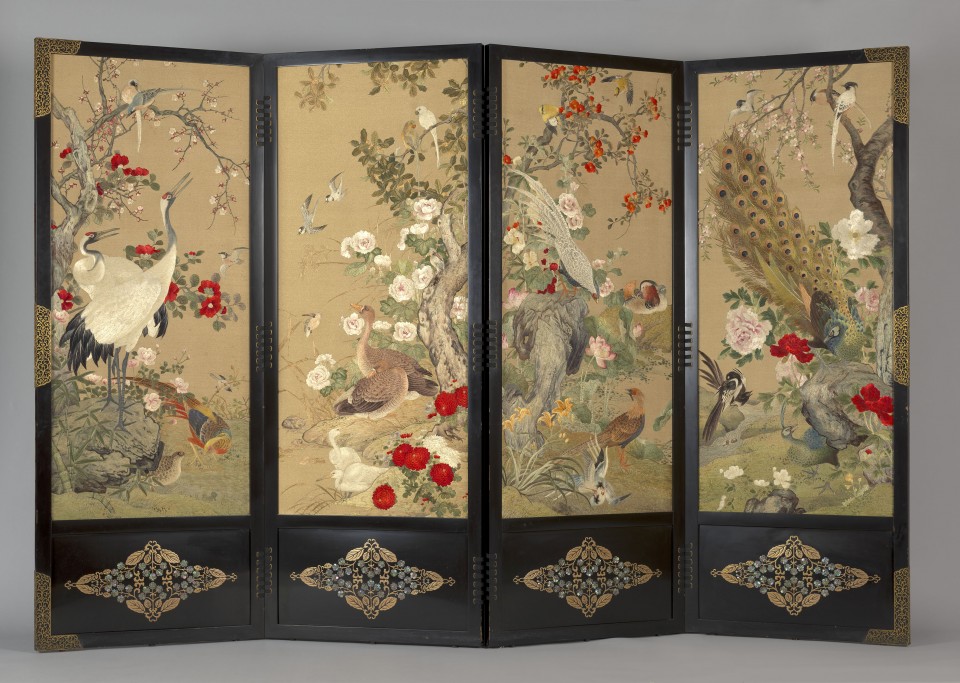 Photo shows a silk embroidered folding screen showing the different seasons which was  a present from Emperor Meiji to King Edward VII on his coronation in 1902. (Photo courtesy of the Royal Collection Trust/ copyright Her Majesty Queen Elizabeth II)(Kyodo)

Thanks to an investigation, staff have been able to establish that a pair of folding screen paintings in the collection were those given to Queen Victoria by Shogun Tokugawa Iemochi in 1860 following the signing of a treaty in 1858.

Similarly, researchers only recently established that a silk embroidered screen showing the different seasons was, in fact, a present from Emperor Meiji to King Edward VII on his coronation in 1902.

Many of the pieces have never appeared in print, which is why the Royal Collection, the body which looks after the royal family's works of art, has decided to publish a book to accompany an exhibition of the items which will take place at Buckingham Palace in April 2022.

The event was to have taken place this year, timed to coincide with the 2020 Tokyo Olympics and the 400th anniversary of the death of William Adams, the first Englishman to arrive in Japan. But it had to be postponed due to the coronavirus pandemic.

Speaking to Kyodo News, the exhibition's curator, Rachel Peat, said the Japanese holdings "are significant due to the provenance of the objects. Many are official, imperial gifts of exceptional quality." Some were made by Living National Treasures (outstanding practitioners of traditional Japanese arts) or official suppliers to the Imperial Household Agency.

"Many were prepared specifically for presentation to the British royal family. Some were personalized for their recipients, making them unique."

"This 400-year process of exchange has never really been told before."

Supplied photo shows a dagger and scabbard presented to Queen Victoria’s second son, Prince Alfred, in London in 1871, two years after his first visit to Japan.  The piece was designed by Emperor Meiji. (Photo courtesy of the Royal Collection Trust/ copyright Her Majesty Queen Elizabeth II)(Kyodo) 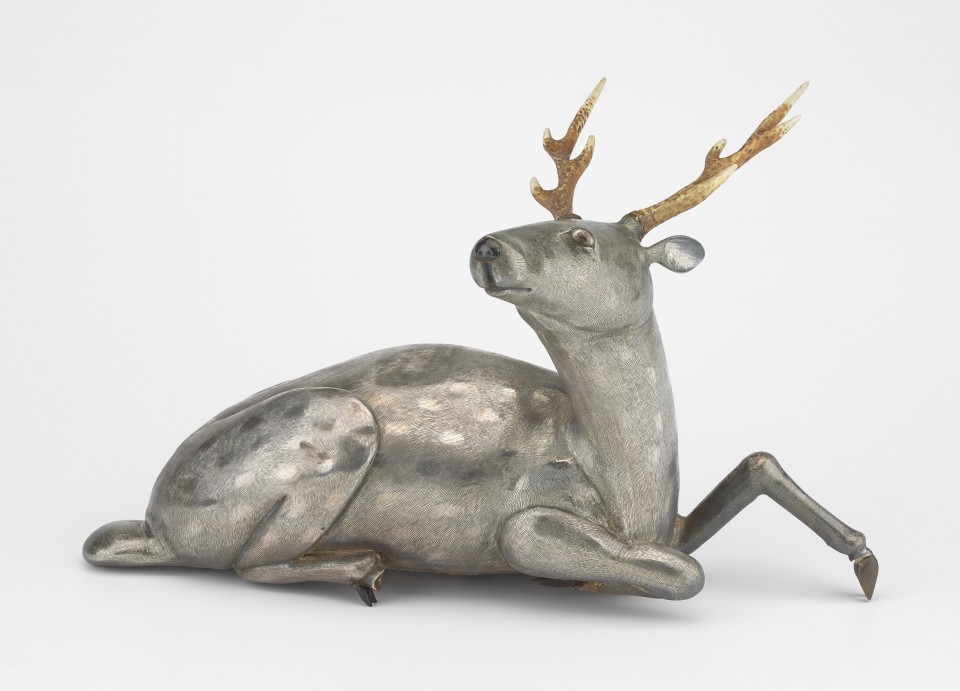 Supplied photo shows a stag in silver and enamel which was given to Queen Victoria in 1865 as a token of friendship by Japan after the British bombardment of Kagoshima in 1863 following a dispute. (Photo courtesy of the Royal Collection Trust/ copyright Her Majesty Queen Elizabeth II)(Kyodo)

Other highlights in the collection include a dagger and scabbard presented to Queen Victoria's second son, Prince Alfred, in London in 1871, two years after his first visit to Japan. The gift was not ready for presentation during the prince's trip, which was the first by a royal of any nationality.

The Royal Collection has now established Emperor Meiji personally designed the scabbard and hilt made of gold, ray skin, and lacquered wood in a cherry blossom design. 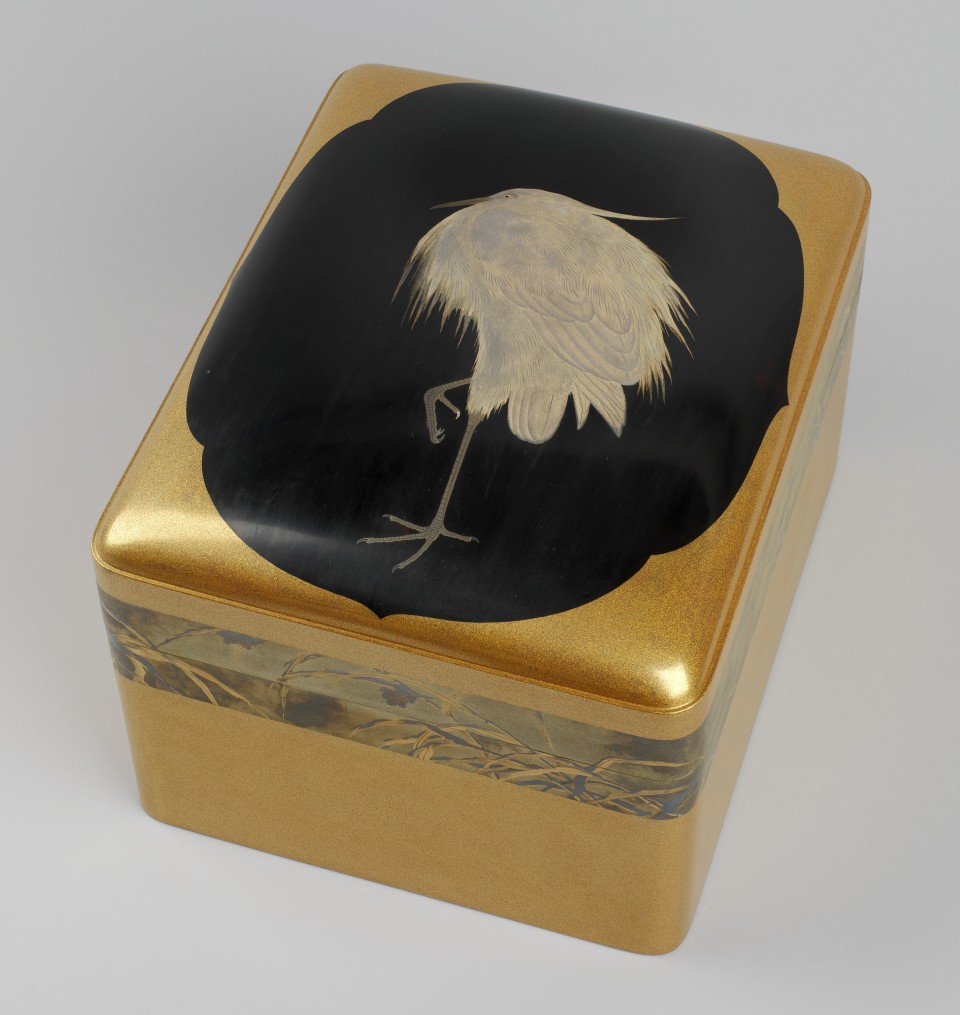 Supplied image shows an ornate lacquer cosmetics box by Shirayama Shosai which was given by Emperor Hirohito to Queen Elizabeth as a coronation gift in 1953. (Photo courtesy of the Royal Collection Trust/ copyright Her Majesty Queen Elizabeth II)(Kyodo)

Emperor Hirohito gave Queen Elizabeth an ornate lacquer cosmetics box by eminent lacquerer Shosai Shirayama as a coronation gift in 1953. It features a fluffy white heron on the lid.

This item is one of the most "fascinating" for Nicole Coolidge Rousmaniere, the Sainsbury Institute's research director for the Study of Japanese Arts and Cultures, who has cast her critical eye over the collection.

She told Kyodo News, "Just after the devastation of World War II and the occupation of Japan, this work feels as if it was carefully chosen to communicate the deep ties between the two nations that remained unruffled."

Another highlight and reflection of both cultures mixing is a square stoneware glazed vessel made by leading artist Shoji Hamada. It was presented to Queen Elizabeth on her state visit to Japan in 1975. The potter had worked in England and was influenced by the Arts and Crafts movement, while the Queen gave the emperor a plate by Hamada's friend and colleague Bernard Leach.

Other interesting items include a lacquer bowl and silver stag given to Queen Victoria in 1865 after British and Japanese forces exchanged fire following a dispute at Kagoshima in 1863. The gift was designed to be a token of friendship.

Staff at the Royal Collection have also been trawling through archives at Windsor Castle and have unearthed letters, diaries and photographs reflecting on royal trips to Japan.

Prince George of Wales, later George V, describes getting dragon and tiger tattoos on his arms at the tender age of 16 in Japan in 1881. He really appreciated the detail that went into Japanese art, the letters note.

Rousmaniere said she is "thrilled" about the book and exhibition as the Japanese collection is "exceptional," and the pieces are in "excellent condition." She added the beauty of the book is that it tells each item's biography and how that enriched relations between Britain and Japan. 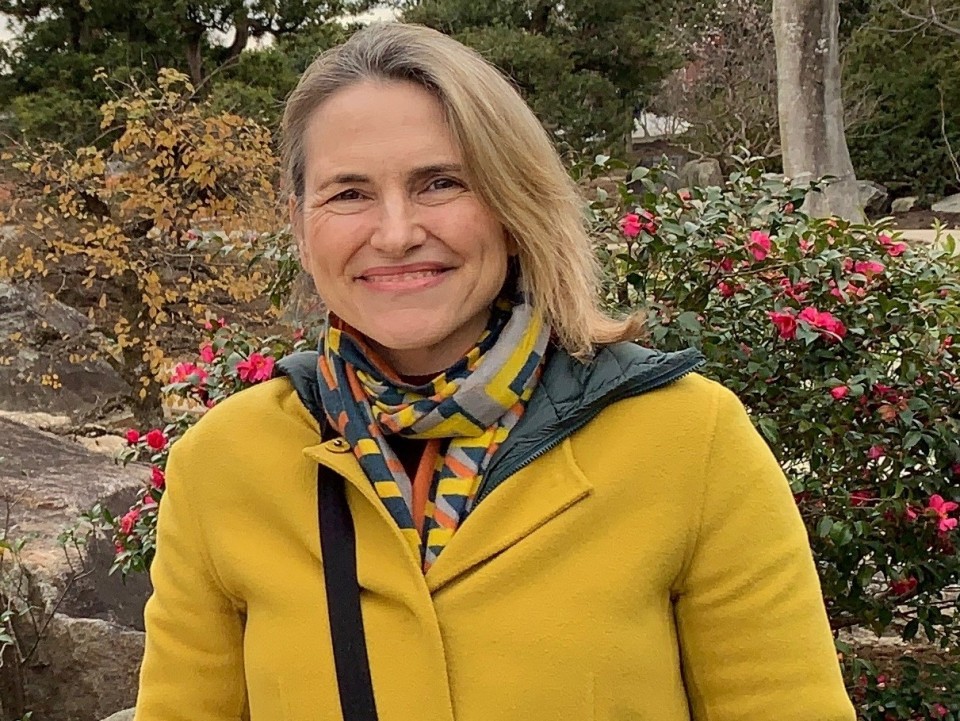 Many works can be found in the state apartments at Windsor Castle and Buckingham Palace, which are used for official events attended by members of the royal family.

Peat said, "The Japanese works of art have been treasured by successive generations of the royal family for many centuries."

And over the years, monarchs have allowed certain Japanese items to be loaned to museums and exhibitions.

The Royal Collection is not owned personally by Queen Elizabeth but is held in trust by her as sovereign for her successors and the nation.

The earliest gift in the collection is a samurai armor set to James I in 1613 after Britain obtained trading rights for the East India Company.

After Japan shut itself off to the rest of the world in the 1630s, royals were left to buy Japanese porcelain and lacquer on the open market, often from Dutch and English traders.

"Japan: Courts and Culture," the book to accompany the forthcoming exhibition, was published in May by the Royal Collection Trust.