Masahiro Tanaka yielded just one hit over five innings in his second start of the season as the New York Yankees lost 1-0 against the Tampa Bay Rays on Friday, retiring Japanese compatriot Yoshitomo Tsutsugo twice in their first-ever encounter in the process.

Tsutsugo, however, valued as much for his ability to reach base as his power, scored the game's only run after drawing an eighth-inning leadoff walk. 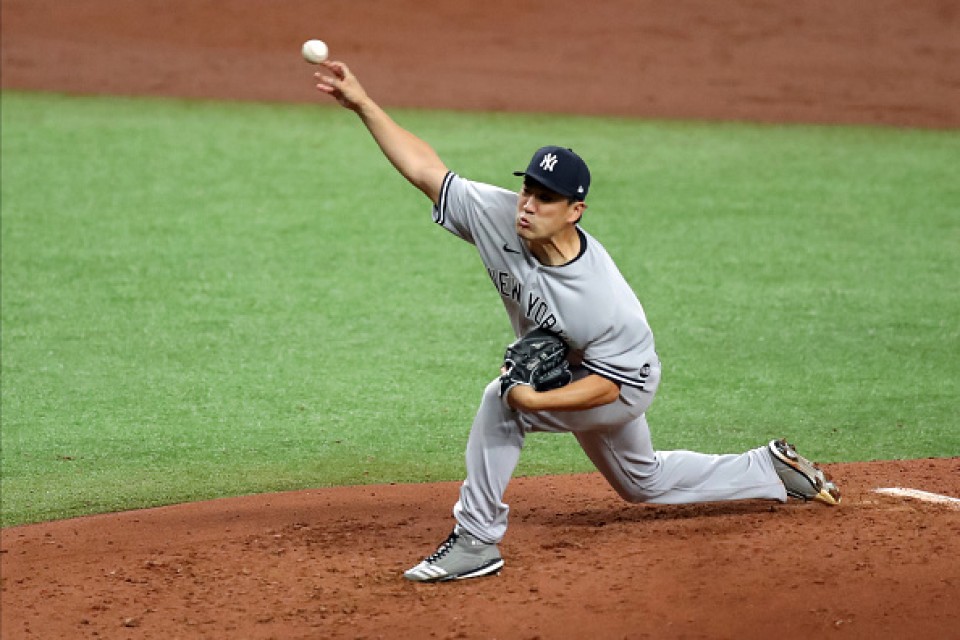 Masahiro Tanaka of the New York Yankees throws against the Tampa Bay Rays in the third inning of a baseball game at Tropicana Field on August 7, 2020 in St. Petersburg, Florida.(Getty/Kyodo)

Tanaka, who didn't factor in the decision, allowed a single to Yandy Diaz with two outs in the first inning but retired the next 13 batters before leaving the mound, striking out five without a walk in an impressive 59-pitch outing in which he did not allow the Rays to reach second base.

The right-hander took a liner to the head in practice ahead of the season's delayed start and sat out the opening of his seventh year in the majors on the injured list with a mild concussion. He allowed two runs over 2-2/3 innings in his first start of the season on Aug. 1.

At Tropicana Field, Tanaka needed two pitches each in two at-bats against Tsutsugo, one of six left-handed batters in the Rays' batting order. Tanaka retired Tsutsugo on a foul pop in the second with an inside fastball before the first-year slugger lined out in the fifth, this time to center, off a splitter.

"Being able to pitch with good command was the biggest thing. It's a surprise things have gone this well," Tanaka said. "It was different from my last outing, I could control both my fastball and breaking balls."

Tanaka, 31, was with the Rakuten Eagles of Japan's Pacific League until 2013, while 28-year-old Tsutsugo started playing for the Central League's DeNA BayStars' first team in 2010. The pair never faced each other in Nippon Professional Baseball's interleague play.

"(Tsutsugo's line out) was off a mistake," Tanaka said. "I got lucky...he hit it cleanly and it could have been an extra-base hit."

In the eighth, Tsutsugo walked on a full count against Adam Ottavino and, after another walk and a wild pitch, scored on Michael Perez's sacrifice fly.

In Seattle, Yusei Kikuchi (0-1) gave up four runs on six hits and a walk over 5-2/3 innings in the Mariners' 8-4 loss to the Colorado Rockies at T-Mobile Park.