Japan also plans to fully lift the re-entry ban on foreign nationals who hold resident status as early as next month, according to the sources.

The restrictions for foreign students will first be eased for those sponsored by the Japanese government and the relaxation is expected to be later expanded to self-supporting international students. 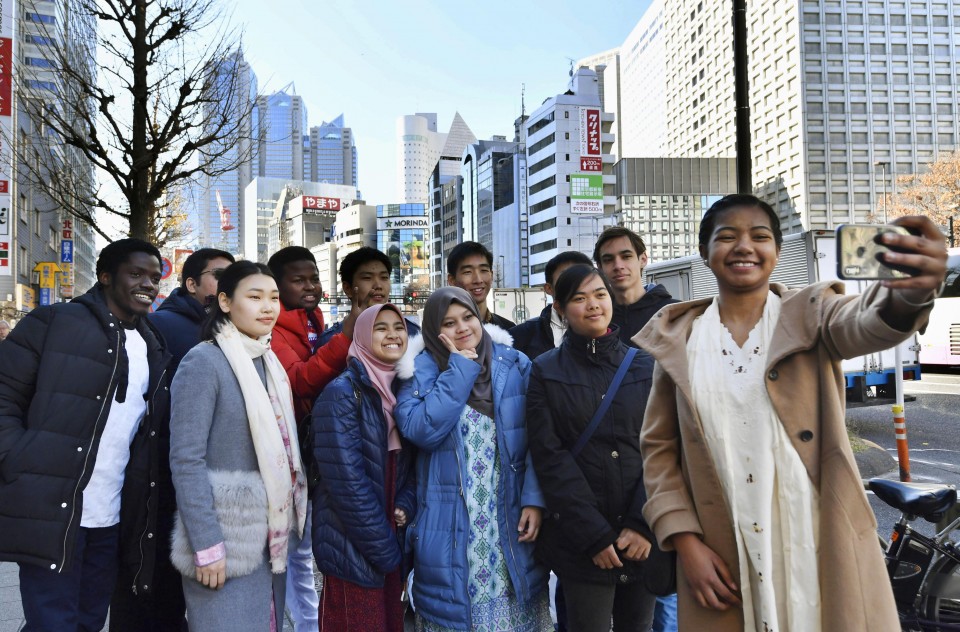 Foreign students pose for a photo on their way to attending their coming-of-age ceremony in Tokyo on Jan. 14, 2019. (Kyodo) ==Kyodo

All foreigners will be required to take polymerase chain reaction tests and prove that they are not infected with the virus when entering Japan, the sources said, adding that they will also be requested to stay in self-isolation for two weeks to monitor their health.

Japan currently denies entry from 146 countries and regions. The denial of re-entry for those with resident status has drawn strong criticism particularly from the country's expatriate community, as it effectively prevents them from traveling abroad and returning.

Many other countries that have imposed travel bans do not discriminate between citizens and foreign residents in granting re-entry.

Most foreign students usually come to Japan in the spring and fall, when the school calendar in the country begins.

But many of them could not enter Japan this spring as the government sharply increased the number of countries designated for entry restrictions in early April, in response to the global pandemic.

Besides foreign residents, who are allowed to re-enter Japan under certain conditions, the relaxation of the restrictions has so far only applied for those on business trips.

The Japanese government has recently decided to accept business travelers from 16 countries, including Thailand and Vietnam.

On Saturday, about 1,000 additional cases of the coronavirus were reported across the country, of which 256 were confirmed in Tokyo, surpassing 200 for the third straight day, 134 in Osaka Prefecture and 101 in Kanagawa Prefecture.

The nationwide cumulative total now tops 62,500, including about 700 from the Diamond Princess cruise ship that was quarantined in Yokohama in February.

The Tokyo government's alert for the pandemic remains at the highest of four levels, meaning "infections are spreading," although some health experts have suggested that a resurgence of infections already hit its peak in late July.