South Korea decided Tuesday to tighten social distancing measures starting from Wednesday as the number of people newly tested positive for the novel coronavirus continues to show a rapid increase.

The nation reported 246 new infection cases earlier in the day, marking the fourth straight day of triple-digit rises, while reaching over 15,500 in total, according figures released by the Korea Centers for Disease Control and Prevention. 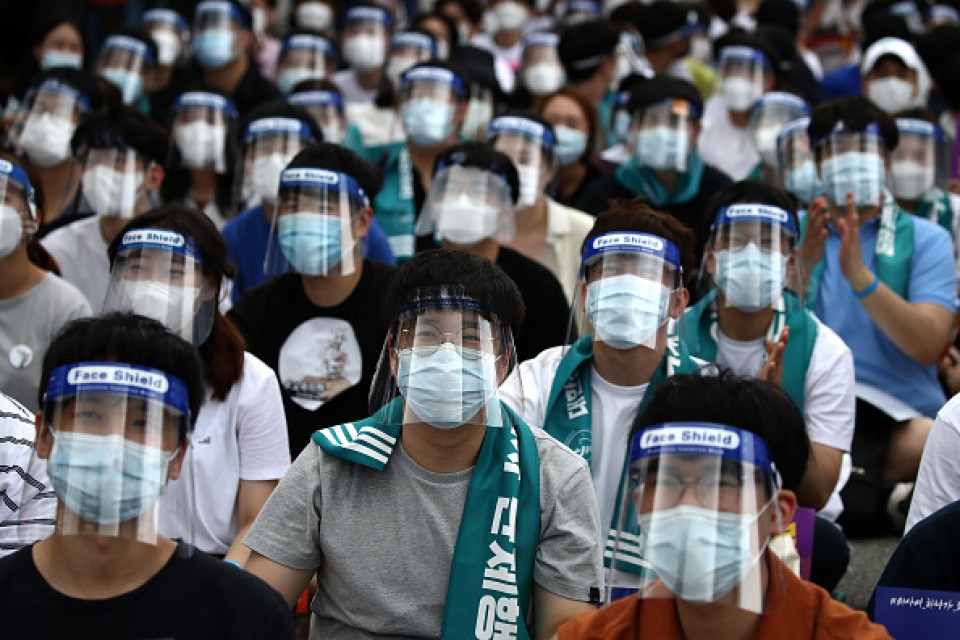 Doctors and medical students wearing face protective equipment as a preventive measure against the coronavirus (COVID-19) attend a rally against the government medical plan on August 14, 2020 in Seoul, South Korea. (Getty/Kyodo)

Most of the cases in recent days have been traced to cluster infections in Seoul and metropolitan areas, with 457 cases linked to a church in Seoul.

There is widespread concern that some of those who were tested positive participated in a rally that was held on Saturday in the center of the capital.

"We are at a very important turning point where the infections could abruptly spread nationwide if not controlled appropriately now," Prime Minister Chung Sye Kyun told reporters in explaining why the government decided enhance social distancing rules within metropolitan areas.

Starting Wednesday, gatherings of more than 50 people inside and 100 people outside will be prohibited, while people are advised to stay home and only online church worship services will be allowed.

Chung pleaded for cooperation from the public, saying the government cannot but implement stronger restrictions if the new ones fail to work, which could greatly harm the nation's economy and the lives of its people.