The J-League on Friday postponed a fourth match for first-division Sagan Tosu, the club at the center of the league's first known novel coronavirus cluster.

Twelve people at Sagan, including manager Kim Myung Hwi, have tested positive for the virus this month, prompting the southwestern Japan club to shut down until next Tuesday.

The stoppage included the postponement of three J1 matches, but the league decided to add the fourth, away to Shonan Bellmare on Aug. 29, due to limited preparation time following Sagan's resumption of operations. 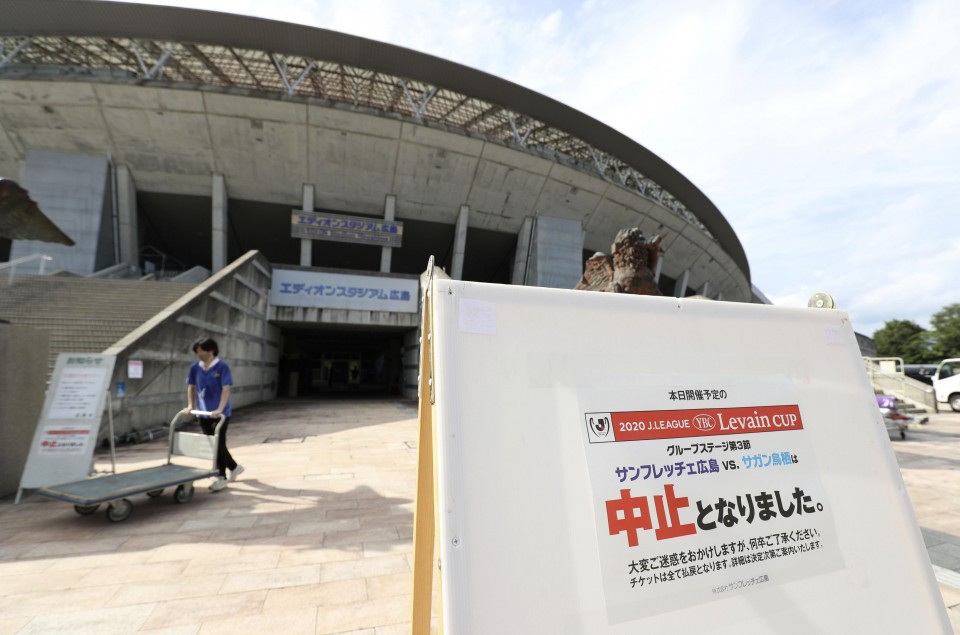 Photo taken Aug. 12, 2020 shows a notice at Edion Stadium Hiroshima that a J-League YBC Levain Cup Group C match between Sanfrecce Hiroshima and Sagan Tosua has been postponed, after a few official staffs of Sagan Tosu had been confirmed positive for the novel coronavirus. (Kyodo)

With Tosu planning to resume training next Wednesday, J-League Vice Chairman Hiromi Hara said they would need at least another week to prepare for a match, based on the current situation at the club and precedents from other professional leagues overseas.

Hara said Sagan should return to action when they host Yokohama FC at Ekimae Real Estate Stadium in Tosu on Sept. 5.

The J-League has yet to announce new dates for the postponed matches -- including fixtures at home to Gamba Osaka last Saturday, away to Vegalta Sendai on Wednesday, and at home to Consadole Sapporo on Sunday -- but it plans to reschedule them during the season.

Sagan conducted polymerase chain reaction tests Monday for 123 people associated with the club, including players, staff and family members, with all coming back negative.

A health ministry team on cluster infections presented a wide-ranging study on the outbreak to J-League clubs Wednesday, suggesting further preventive measures and areas for review.

The four-day study included an inspection of Sagan club facilities and a survey of its members which revealed potential sources of infection.

They included used towels being left in shower rooms, as well as players and staff dining out with people other than their family members.

The study also highlighted the risk of infection when players receive instructions from coaching staff without masks during mid-game drink breaks. The practice, not prohibited under current J-League guidelines, may come under review.