Japan's prefectural governors on Sunday decided to ask the central government to consider excluding more areas from a travel campaign as necessary to prevent the spread of the novel coronavirus.

But "we have to avoid (the campaign) causing the virus to spread," they said in proposals to the central government compiled at an online meeting to discuss responses to the coronavirus. 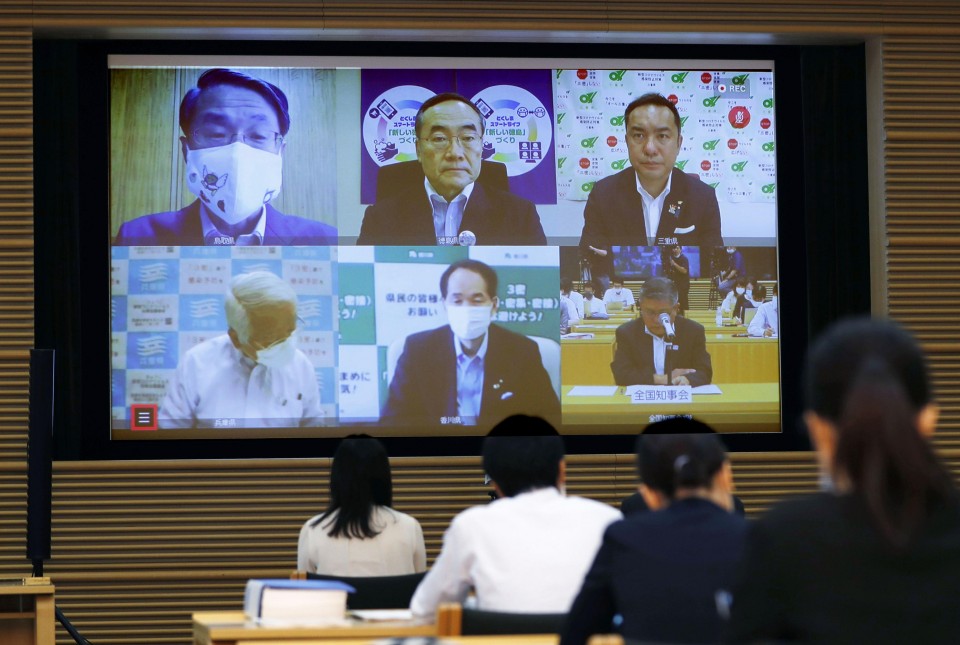 Tokushima Gov. Kamon Iizumi (upper center in screen) is pictured during a meeting of the National Governors' Association which was held online on July 19, 2020. (Kyodo)

The proposals will be submitted to the central government in the near future.

The government will launch the Go To Travel Campaign on Wednesday as planned, but is excluding Tokyo from the program after a recent spike in cases in the capital.

"We are facing a critical phase where we have to deal with the movement (of people) in wider areas and prevent the spread of the virus at the same time," Tokushima Gov. Kamon Iizumi, president of the National Governors' Association, said in the opening speech, referring to a rise in nationwide infections.

Tokyo remains the hardest-hit area with its new cases accounting for about a third of the nationwide tally. On Sunday, the Tokyo metropolitan government reported 188 new infections.

Tokyo saw the figure reaching nearly 300 for three straight days through Saturday including a single-day record of 293 cases reported on Friday.

Japan reports over 660 new cases of COVID-19, most in over 3 months

The daily figures reflect the most recent totals reported by health authorities and medical institutions in the capital.

Across the country, total cases stood at some 25,300 as of Sunday afternoon as a resurgence in infections has also become more apparent in other urban areas. The tally excludes 712 from the Diamond Princess cruise ship that was quarantined in Yokohama in February.

The governors urged the central government to run the campaign over the long term, as some areas in the Kyushu region are not able to accept tourists anytime soon in the wake of devastating floods caused by torrential rain.

They also asked the government for timely disclosure of information about infections at U.S. bases in Japan after an increasing number of new cases has been reported by the U.S military.

In Okinawa, which hosts the bulk of U.S. military facilities in Japan, 143 military personnel have tested positive, according to the prefectural government.