The July grand sumo tournament commenced in front of spectators in Tokyo on Sunday, the start of the sport's first top-level meet since March's Spring Grand Sumo Tournament was held behind closed doors in Osaka.

The Japan Sumo Association opted to cancel the Summer Grand Tournament in May amid a nationwide state of emergency declared over the coronavirus pandemic. The July meet was delayed by two weeks and moved from its traditional location in Nagoya, central Japan, to the capital to mitigate the risk of infection posed by travel.

Yokozuna Hakuho, who won a record-extending 44th top division title in March, takes on komusubi Okinoumi on the opening day of the 15-day meet, while new ozeki Asanoyama faces rank-and-filer Takanosho in his first tournament at sumo's second highest rank.

Despite the recent rise in confirmed cases of infections, the JSA decided to admit about 2,500 fans per day to Tokyo's Ryogoku Kokugikan, which is often filled to its capacity of about 11,000 for the duration of the sport's marquee event, which is normally held six times a year with three of the six tournaments taking place in Tokyo. 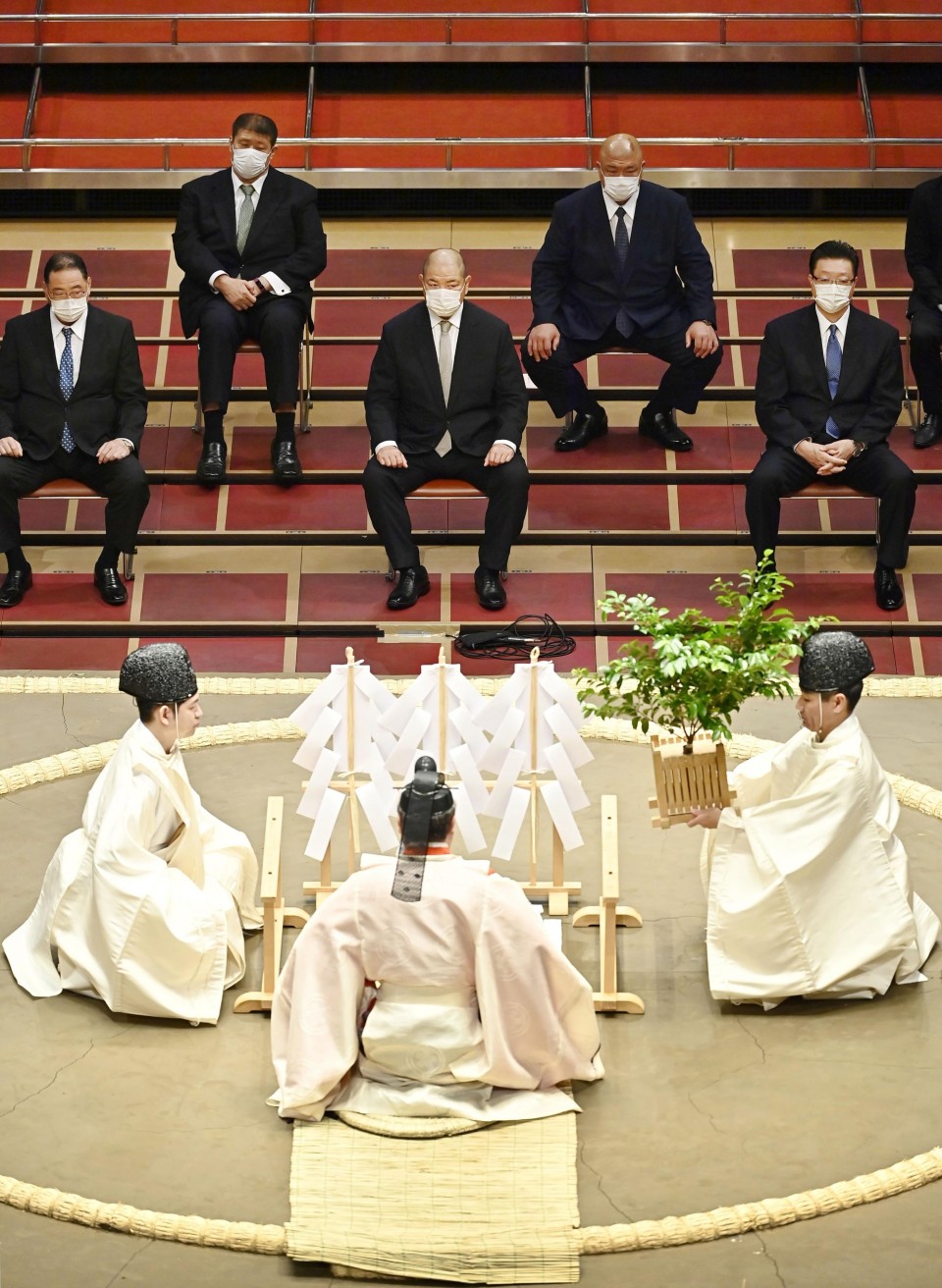 A ceremony is held in the absence of sumo wrestlers at Tokyo's Ryogoku Kokugikan hall on July 18, 2020, for their safety during the July grand sumo tournament, beginning the following day, amid the spread of the new coronavirus. (Kyodo)

The move is in line with government guidelines that have allowed up to 5,000 people to attend sporting and other events since July 10.

The JSA has put several measures in place to prevent the spread of the coronavirus, including prohibiting wrestlers from generally going outdoors and asking them to refrain from training at different stables.

Wrestlers have also been asked to wear masks while in their dressing room, and all JSA members will have their temperature taken daily. Those with temperatures measuring over 37.5 C, or 37 C for two straight days, will undergo a test to check for coronavirus antigens.

Spectators attending the two-week meet will be required to wear masks and sit individually in the "masuseki" boxed enclosures that usually accommodate four people. The JSA has asked them to refrain from cheering and encouraged applauding instead.

The Spring Grand Sumo Tournament would have been immediately suspended if even one wrestler became infected, but on Sunday the sumo elder in charge of administering the tournament, Oguruma, revealed on television that the JSA policy will not abandon the tournament in the event of infections. 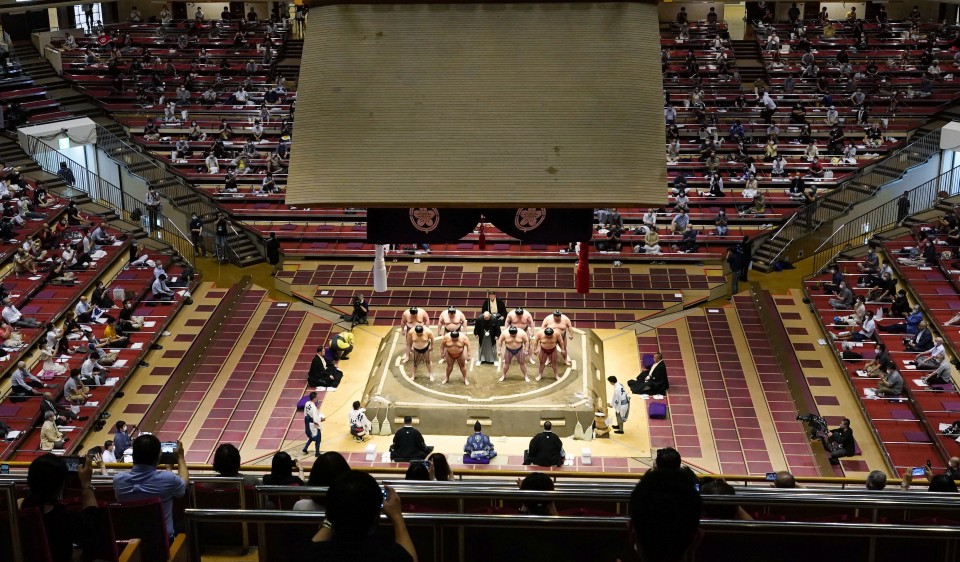 The Spring basho at Edion Arena Osaka in March was the first ever to be held without spectators. May's cancellation was the third in sumo history, and first since the March 2011 grand tournament was axed because of a match-fixing scandal.

Shortly after the Summer meet was shelved, a 28-year-old wrestler from the sport's fourth-highest division died due to multiple organ failure caused by the coronavirus. Shobushi, whose real name was Kiyotaka Suetake, had been the first sumo wrestler known to test positive for the virus in early April.

The JSA has also decided to move November's Kyushu Grand Sumo Tournament from Fukuoka in southwestern Japan to Tokyo in response to the virus. 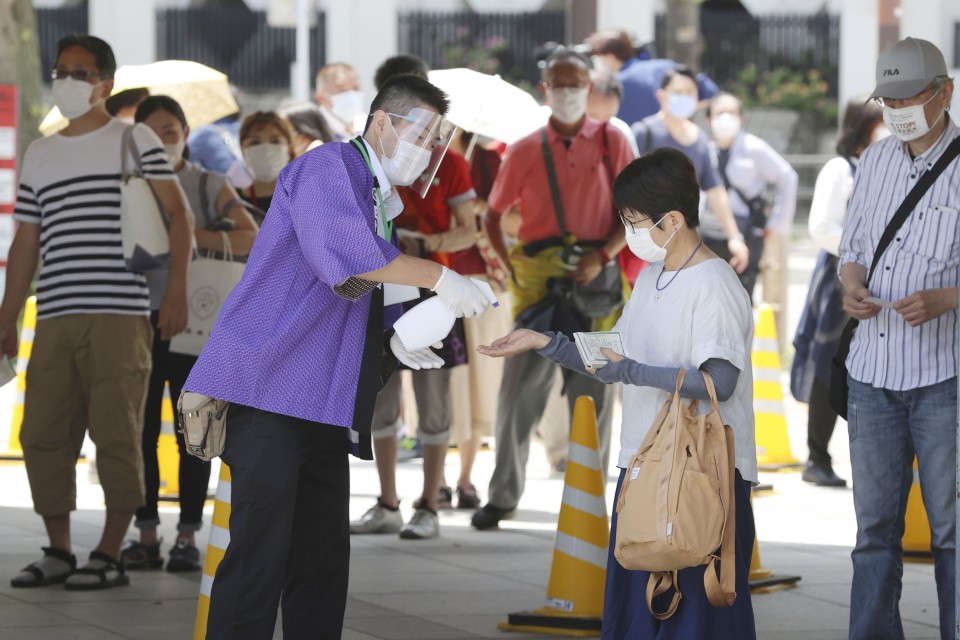