Michiharu Kimura has been living alone in welfare housing in Yokohama's day-laborer district for over a decade after finding it impossible to rent an apartment.

Kimura (not his real name), 68, is among a growing number of single older adults in Japan who are being turned away by landlords because they lack guarantors or family and are seen as running the risk of falling behind on their payments or even their deaths going undiscovered. They face similar problems being admitted to hospitals and care facilities.

"This was supposed to be temporary housing for me, but now it looks like it will be my final home," Kimura said of his 3-1/2 mat tatami room in Yokohama's Kotobuki district, which is furnished with a TV, microwave, portable toilet, and nursing care bed.

A survey by the Ministry of Health, Labor and Welfare in July 2018 found that there were 570 such facilities nationwide offering free or low-priced lodgings registered with local governments across Japan.

Run by private companies as well as nonprofit organizations -- with many operators having a reputation for unscrupulous business practices -- they have about 17,000 users, 90 percent of whom are on welfare.

Forty-five percent of tenants are 65 or older, and 60 percent use the facilities for more than one year. Kimura, who had a stroke when he was 56 and was left with partial paralysis, has been there for 11 years. 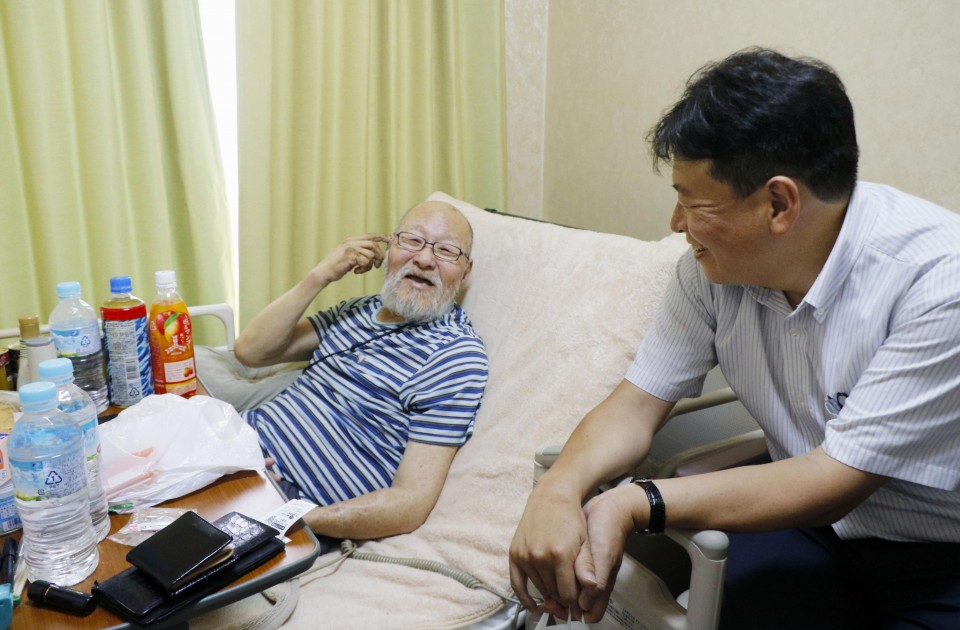 A medical social worker (R) talks with Michiharu Kimura (not his real name) in Yokohama, Kanagawa Prefecture, on June 17, 2020. (Kyodo)

Unmarried and estranged from his relatives, he was let go from his job as a security guard after his stroke. Forced to leave his company dormitory, he soon started receiving welfare assistance.

Seiji Kamamura, 40, a medical social worker, tried helping Kimura get back on his feet after he was discharged from hospital. He accompanied him on more than 10 attempts to rent apartments, but Kimura was refused each time.

As a holder of a disability certificate, Kimura stood a higher chance of being selected in a lottery for municipal housing compared with average citizens. But he missed out, all the same, leaving him "heartbroken."

"It is not his fault that he has no family," Kamamura said about Kimura's inability to find any accommodation other than his tiny room in the welfare housing facility.

While such accommodation is meant to be temporary, moving out to something better can be hard in some cases, with the operators overcharging for services and effectively defrauding tenants out of their welfare payments, experts say.

Such facilities can also be safety hazards -- in one high-profile case in 2018, 11 people died in a fire at a lodging facility in Sapporo that housed impoverished elderly and disabled people.

With a rise in the number of applications for welfare payments amid the worsening labor market situation due to the spread of the coronavirus, some local governments have all but been accused of coercing people to enter the low-cost facilities as a condition for receiving welfare, support groups told Kyodo News early this month.

While such action reduces the manpower and cost burden for municipalities, it is a violation of the welfare law, which stipulates that it is forbidden to force a person to live in a facility against their will. The welfare ministry has said setting such "a condition for welfare applications is wrong."

The welfare ministry, which has been strengthening the basic standards businesses must meet to operate the low-cost facilities, also said it will subsidize the cost of renovating shared rooms into private rooms to prevent the spread of the coronavirus.

A man in his 60s, who had been living on the street, lost his job in early May due to the coronavirus pandemic and tried applying for welfare in Funabashi, Chiba Prefecture, east of Tokyo.

But he was told it would be difficult for him to receive welfare unless he entered a welfare facility. Having a strong disinclination to live in such lodgings because of the shady reputation of many operators, the man gave up applying.

Apartment owners that turn away single older people are not the only problem in aging Japan.

According to a survey conducted by a research group at the welfare ministry, 65 percent of medical institutions request that patients being hospitalized have a guarantor, and roughly 30 percent of care facilities refuse admittance to those without one.

Some organizations, many run as nonprofits, have stepped in with offers to help such people prepare for sudden accidents or illnesses by acting as their guarantor -- for a fee.

One such nonprofit, LISS, based in Tokyo, operates a living support service. As part of its "family" contract, staff accompany users for hospital visitations, nursing services, and even emergency hospitalizations, attending to their needs.

The NPO also makes arrangements for funerals, including collecting remains, and provides numerous services, such as the cancelation of apartment and care facility contracts after people die.

Along with a deposit, the service can run upward of 1 million yen ($9,400), including a daily allowance for attending to users and travel expenses. But LISS says single older people, childless elderly couples, and more recently, unmarried persons in their 40s who live with their parents, have been applying.

The number of single older adults aged 65 and over in Japan is rising quickly and is estimated to reach close to 9 million by 2040.

There has been an ever-increasing number of guarantor services but with some demanding exorbitant fees.

Junko Ezaki, a notary public who supports the elderly said, "It is essential that the contents be scrutinized before a contract is made with a guarantor to find out how much it will cost and what kind of services will be provided," adding that the government also needs to build a framework to assess guarantor support and business standards.