Imperial throne of emperor put on display in western Japan

The canopied "Takamikura" imperial throne in which Japan's emperor proclaimed his enthronement last October was put on public display at Kyoto Imperial Palace on Saturday.

The Imperial Household Agency will be showing the throne until Aug. 27 and will limit viewing to 5,000 people a day to prevent the spread of the coronavirus. Before opening hours on Saturday, about 100 people had lined up.

It was initially scheduled to be on public display on March 1 but was put off due to the outbreak of the virus. 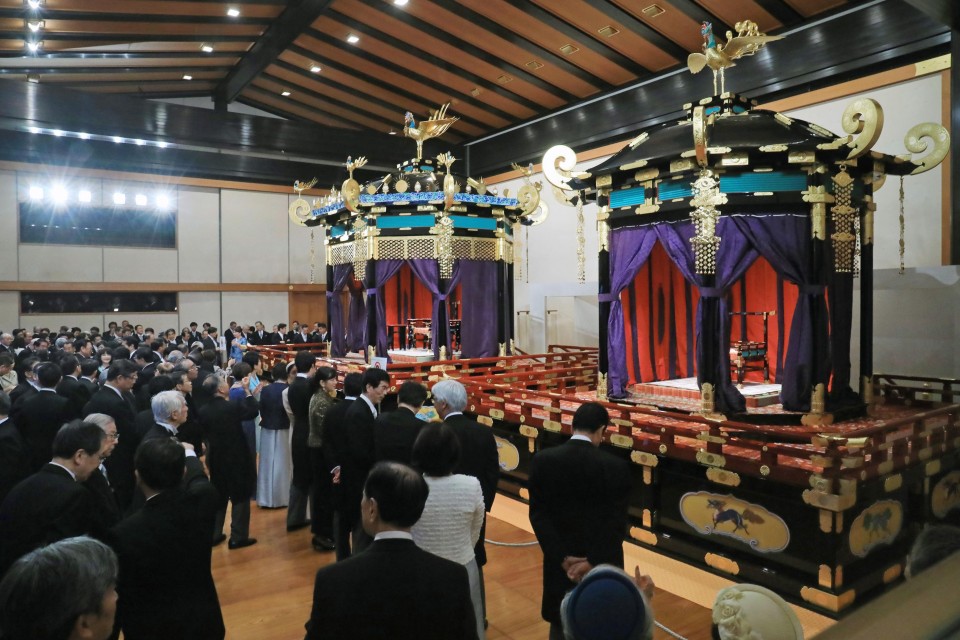 Photo taken Oct. 25, 2019, shows guests of a court banquet observing the Takamikura imperial throne (L) at the "Matsu no Ma" state room of the Imperial Palace in Tokyo from which Japanese Emperor Naruhito proclaimed his enthronement during a ceremony three days earlier. Empress Masako was seated on the adjacent Michodai throne at the ceremony. (Kyodo)

Emperor Naruhito officially proclaimed his enthronement on Oct. 22 from the 6.5-meter-high canopied Takamikura imperial throne in the "Sokuirei Seiden no gi," a solemn ceremony at the Imperial Palace featuring elements of ancient protocol.