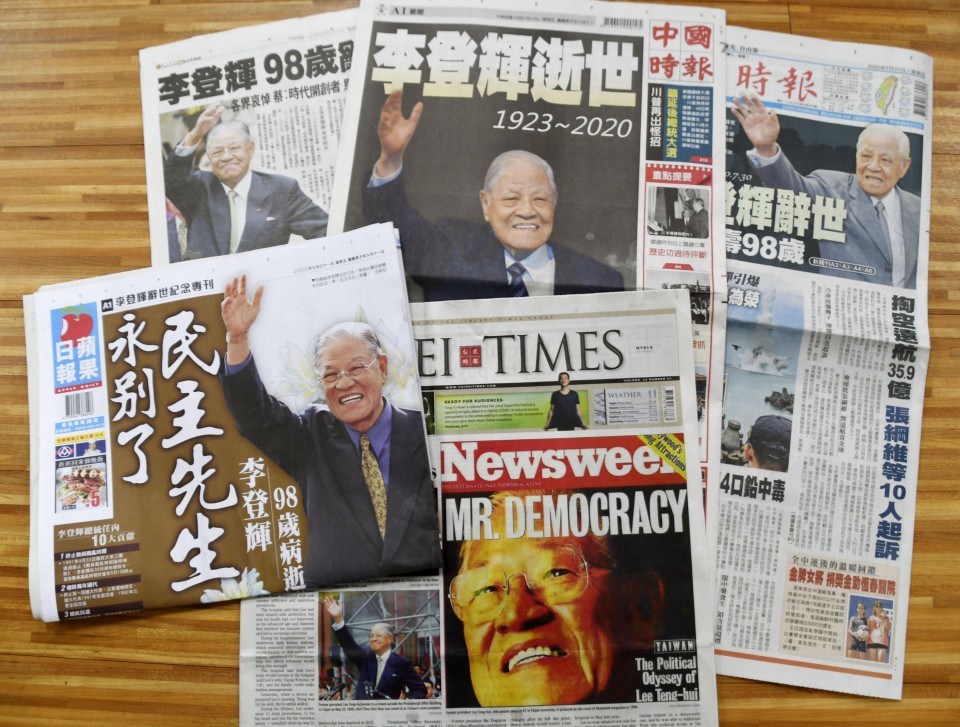 The frontpages of Taiwan's major newspapers on July 31, 2020, and their reports on the death of former President Lee Teng-hui. (Kyodo)

"The president's death is truly regrettable and I pray for his soul from the bottom of my heart," Abe said, adding that Lee advanced freedom, democracy and human rights in Taiwan.

Lee, who had been in a coma since Feb. 17, was pronounced dead at 7:24 p.m. Thursday at Taipei Veterans General Hospital. The hospital gave the cause of death as multiple organ failure.

Lee, who ruled from 1988 to 2000, played a key role in the self-ruled island's democratization. He grew up under Japanese rule in Taiwan, which lasted from 1895 to 1945, and was known for his affinity for Japan.

"Japanese people have special feelings of closeness to him as a person who built the foundation of Japan-Taiwan relations," Abe said.

China, which regards Taiwan as a renegade province awaiting reunification, has continued to loom large behind the Japan-Taiwan relationship.

When Japan normalized diplomatic relations with China in 1972, it severed ties with Taiwan. Over the years, Japan has developed nongovernmental, working-level relations and the Asian neighbors now enjoy close economic ties and increased people-to-people exchanges.

Asked about the possibility of sending a representative to Lee's funeral, Chief Cabinet Secretary Yoshihide Suga told a press conference that the government has no plans to do so.

Abe has been treading carefully in dealing with China and Taiwan, while its longtime security ally the United States ramps up pressure on Beijing.

U.S. Secretary of State Mike Pompeo said Lee helped end decades of authoritarianism and usher in a new era of economic prosperity, openness and the rule of law.

"During his 12-year tenure, Lee's bold reforms played a crucial role in transforming Taiwan into the beacon of democracy we see today," Pompeo said in a statement, adding that the United States will honor his legacy and strengthen bonds with Taiwan.