A man and a woman were found dead after a mudslide hit an area in Hiroshima Prefecture on Tuesday as heavy rain continued in western Japan, also causing a river to flood and prompting authorities to call on more than 10,000 people to evacuate.

Rescue workers received a call at around 6 a.m. that a hill behind a house in the city of Higashihiroshima had collapsed and later found the two bodies, believed to be those of Shigemi Kurakane, 55, a resident of the house, and his 84-year-old mother Chiyoko.

"We expected the rain to get heavier, but I regret we were unable to foresee the disaster and didn't issue any warnings," Hiroshima Gov. Hidehiko Yuzaki told reporters, explaining why an evacuation advisory was issued for the area only after the mudslide occurred. 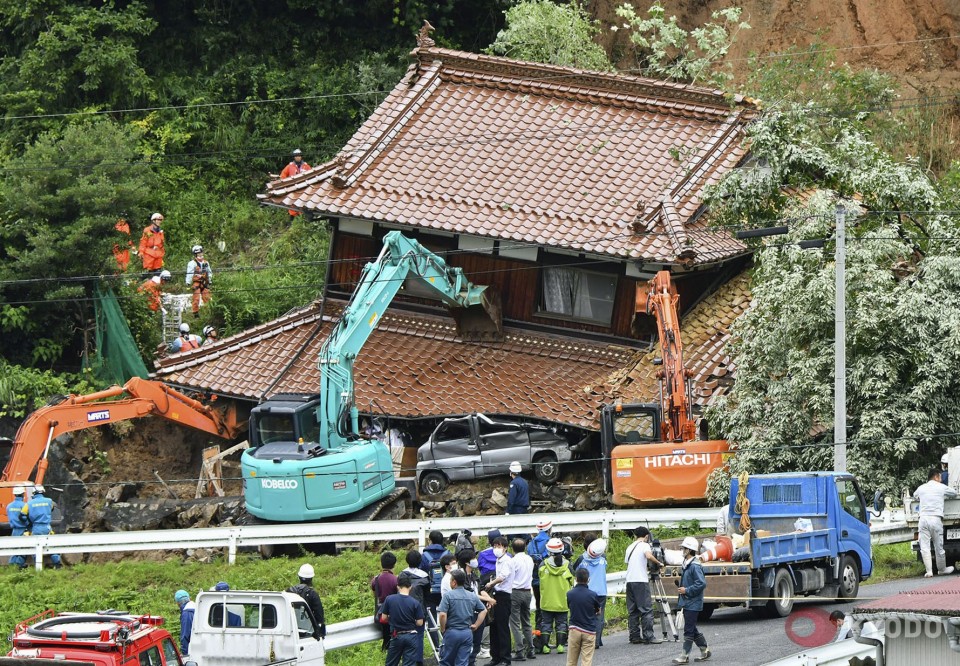 Rescue workers search for two residents of a house hit by a mudslide in Higashihiroshima, Hiroshima Prefecture, on July 14, 2020. (Kyodo)

In neighboring Shimane Prefecture, heavy rain caused the Gono River to overflow Tuesday morning, prompting authorities in the city of Gotsu and nearby towns to issue evacuation orders and recommendations for some 11,000 people of 5,500 households at one point. By noon, around 350 people evacuated to designated shelters.

Downpours apparently triggered the mudslide in Hiroshima, with many parts of the prefecture having seen this month's rainfall levels already hit double the usual amount for the whole of July, according to the Japan Meteorological Agency.

Due to the influence of a seasonal rain front and a low-pressure system extending over the Sea of Japan, Hiroshima and Shimane saw up to around 150 to 200 millimeters of rainfall in 48 hours through Tuesday morning, the weather agency said.

It warned that eastern Japan may also see heavy rain through Wednesday morning.

The unusual 12-day streak of rain in western Japan has already surpassed the downpour observed in the area in 2018 for 11 days.

The central government on Tuesday designated the current deluge as a disaster eligible for special administrative measures to rebuild the lives of victims.

At least 74 people died in July's downpours, including 64 in the southwestern prefecture of Kumamoto.

Nearly 15,000 houses had been damaged in wider areas, including those in eastern and northeastern prefectures, as of Tuesday afternoon due to the active rainy season front, according to the Fire and Disaster Management Agency.

Over 100 rivers have overflowed, with some 380 cases of damage from mudslides reported, the land ministry said.