Japan reported on Thursday more than 980 new daily coronavirus infections, marking a record for a second straight day in a resurgence since the government lifted a state of emergency about two months ago.

The figure brings the nationwide tally to more than 28,900, including some 700 cases from the Diamond Princess, the cruise ship quarantined in Yokohama in February, with the death toll reaching 1,005.

Concerns over the worsening outbreak have grown stronger in Japan as a four-day holiday began Thursday, the day after the government's domestic travel subsidy campaign was launched.

"I have a stronger sense of crisis," economic revitalization minister Yasutoshi Nishimura, who is also in charge of the coronavirus response, said at a press conference.

The government aims to secure more beds in hospitals and hotel rooms for patients with light symptoms, he added.

The record increase in daily infections comes as the Tokyo metropolitan government confirmed a record 366 daily cases on Thursday, surpassing the previous high of 293 cases confirmed last Friday and topping the 300 mark for the first time.

Tokyo has seen triple-digit single-day new infections on all but two days in July, with the capital's cumulative coronavirus cases topping the 10,000 mark on Wednesday and accounting for about a third of the nationwide tally.

The capital and some other urban areas in Japan have seen sharp rises in confirmed cases since a nationwide state of emergency was fully lifted in late May.

"I'd like Tokyo residents to be cautious about virus infections and act carefully as a four-day holiday in the nation has already started," Tokyo Gov. Yuriko Koike told reporters. 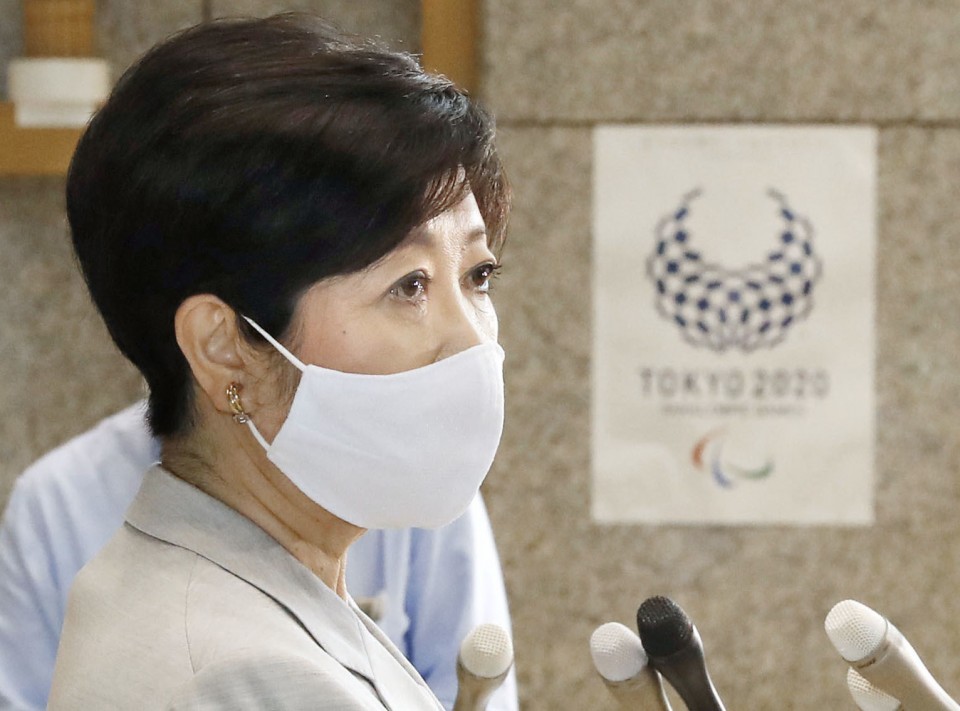 Tokyo Gov. Yuriko Koike meets the press in Tokyo on July 23, 2020. The Tokyo metropolitan government confirmed the same day a single-day record of 366 new cases of the novel coronavirus. (Kyodo)

She said the increasing number of virus cases reflects an increase in Tokyo's testing capacity to nearly 5,000 tests a day from around 2,500 at the beginning of the month.

Koike has urged residents to avoid nonessential outings during the four-day holiday after raising the pandemic alert to the highest of four available levels, indicating "infections are spreading."

The government excluded Tokyo from the travel promotion campaign in a last-minute decision on concerns over the recent spike.

In Tokyo, people in their 20s and 30s account for about 60 percent of total infections but Koike said the virus infections are spreading to those in their 40s and 50s while the contagion is also spreading to the Tama district, western Tokyo, from the central area.

Osaka Prefecture in western Japan on Thursday reported a total of 104 new infections, the second-largest figure following 121 cases on Wednesday, while Gov. Hirofumi Yoshimura asked local residents to avoid nightlife establishments which have no appropriate measures against the virus.

Hyogo Prefecture, west of Osaka, issued its original virus alert Thursday that the prefecture has entered "the phase of increasing infections" after confirming 35 new cases Thursday, its largest number of daily cases since the state of emergency was lifted for the prefecture.

"We need to be more cautious as infections have been rising very rapidly," said Hyogo Gov. Toshizo Ido, requesting residents avoid traveling to areas with a growing pace of infections such as Aichi and Fukuoka prefectures as well as the Tokyo metropolitan area and Osaka.