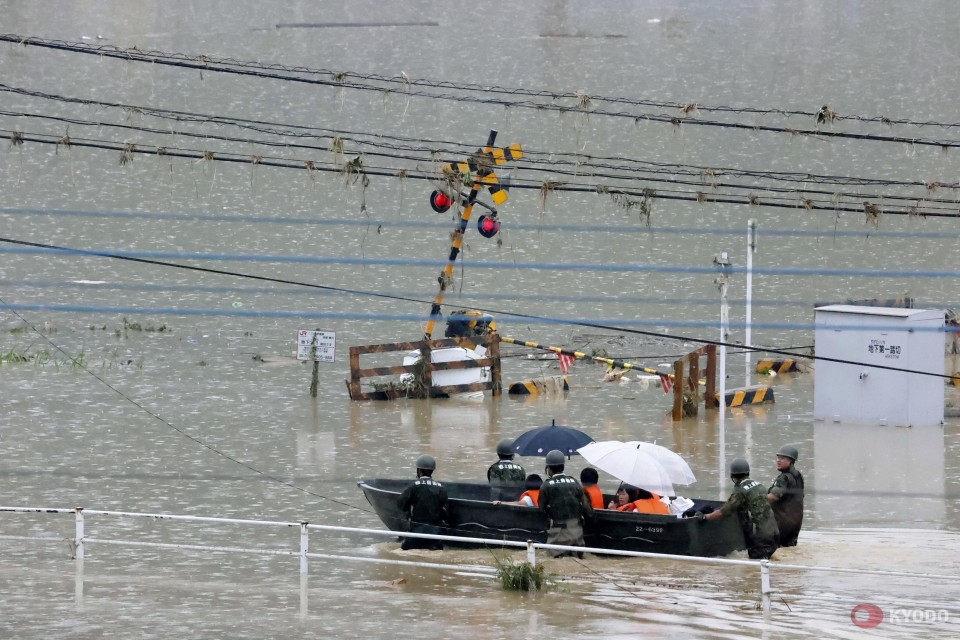 KUMAMOTO, Japan - Twenty-two people have been confirmed dead, and at least 18 others are presumed dead in the flood-ravaged southwestern Japan prefecture of Kumamoto, local authorities said, as rescue operations continued on Sunday.

At least 11 more people are missing, and more than 2,000 households in eight municipalities remained isolated on Sunday morning after floods and mudslides cut off roads and swept away buildings. 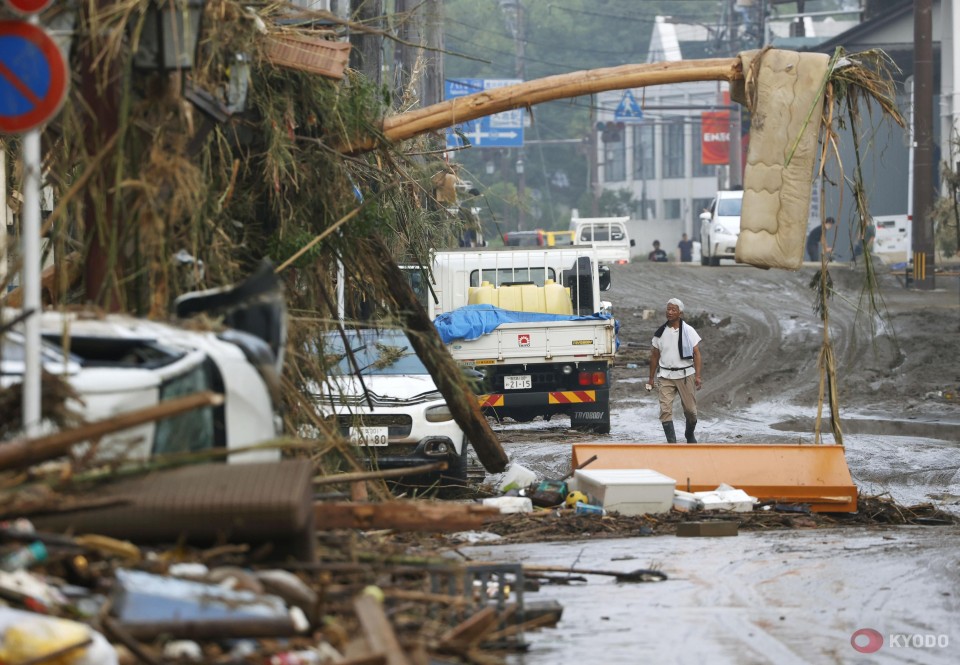 A Kyodo helicopter flew over an area where the words "rice, water, SOS" could be seen spelled out on the ground. Elsewhere, others were seen waving towels and calling for rescue and relief goods.

The Japan Meteorological Agency urged residents to remain alert as torrential rain is forecast in parts of western Japan through Tuesday.

Of the 22 confirmed fatalities, nine each were reported in Hitoyoshi and Ashikita, and one in Tsunagi, mostly in their 60s to 80s.

Sixteen more people are feared dead in Kuma, including 14 from a flooded nursing home near the river, which runs through the central part of the village.

About 50 people were rescued from the flood-hit Senjuen nursing home on Sunday, the local government said. A day earlier, the 14 people were found showing no vital signs but have yet to be officially declared as fatalities. 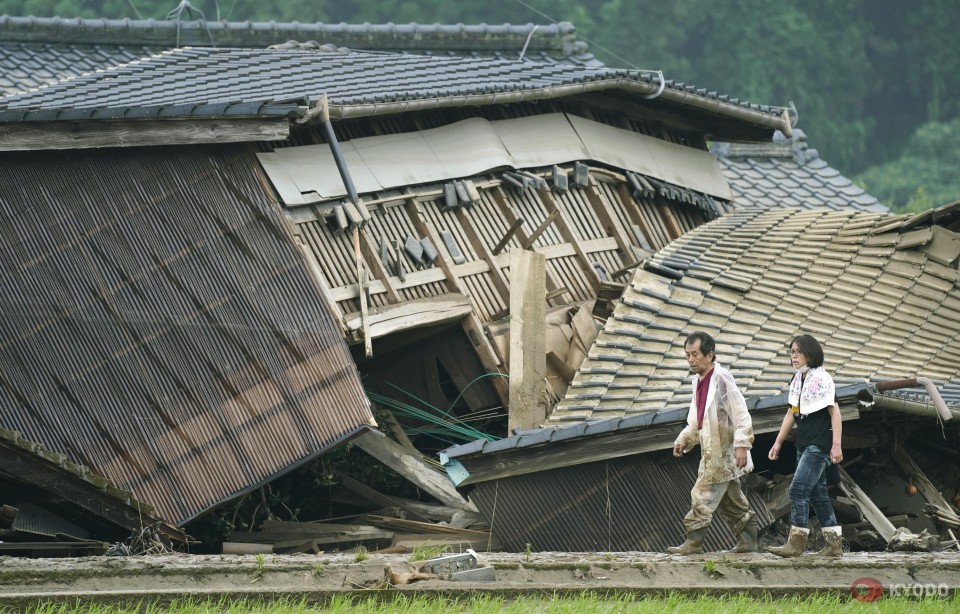 The flood-ravaged village of Kuma, Kumamoto Prefecture, on July 5, 2020. (Kyodo)

Ground Self-Defense Force personnel have been dispatched to the region as part of relief efforts. Prime Minister Shinzo Abe has said around 10,000 SDF personnel will be mobilized.

The premier said at a disaster management meeting Sunday that he wants rescue workers to do their utmost to help stranded people and search for the missing "through the night."

A rain front began bringing downpours to the region between late Friday and early Saturday. The Japan Meteorological Agency issued an evacuation order for a total of 203,200 residents in Kumamoto and neighboring Kagoshima Prefecture, where more than 100 shelters were set up.

Up to 350 millimeters of rain is expected in the 48-hour period through late Tuesday afternoon in the southern part of Kyushu Island, which includes areas hit hard by the flooding, the agency said.

Some 4,500 homes in Kumamoto Prefecture remained without power on Sunday afternoon, according to Kyushu Electric Power Co. 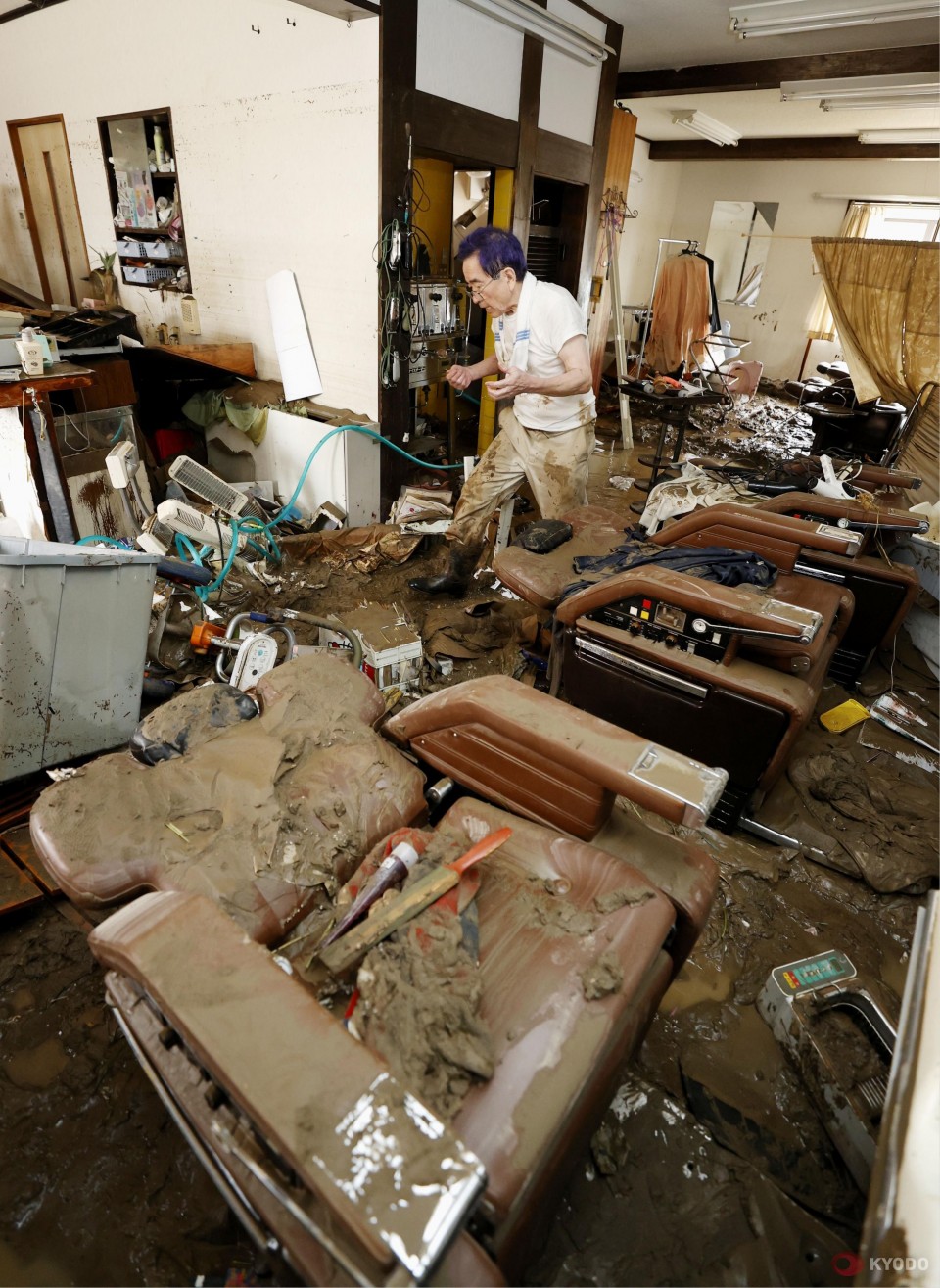 Katsuyoshi Ogata, 72, tries to clean up his barber shop after it was flooded by torrential rains in Hitoyoshi, Kumamoto Prefecture, on July 4, 2020. (Kyodo)