Yokozuna Hakuho and new ozeki Asanoyama earned their seventh straight wins at the July Grand Sumo Tournament on Saturday and remain in a three-way tie for the lead after one week of action.

In the final bout of Day 7 at Tokyo's Ryogoku Kokugikan, Hakuho delivered a left-handed slap and right-shoulder charge to No. 3 maegashira Kiribayama (2-5) before latching onto the top-division rookie's belt and hurling him off the dohyo. 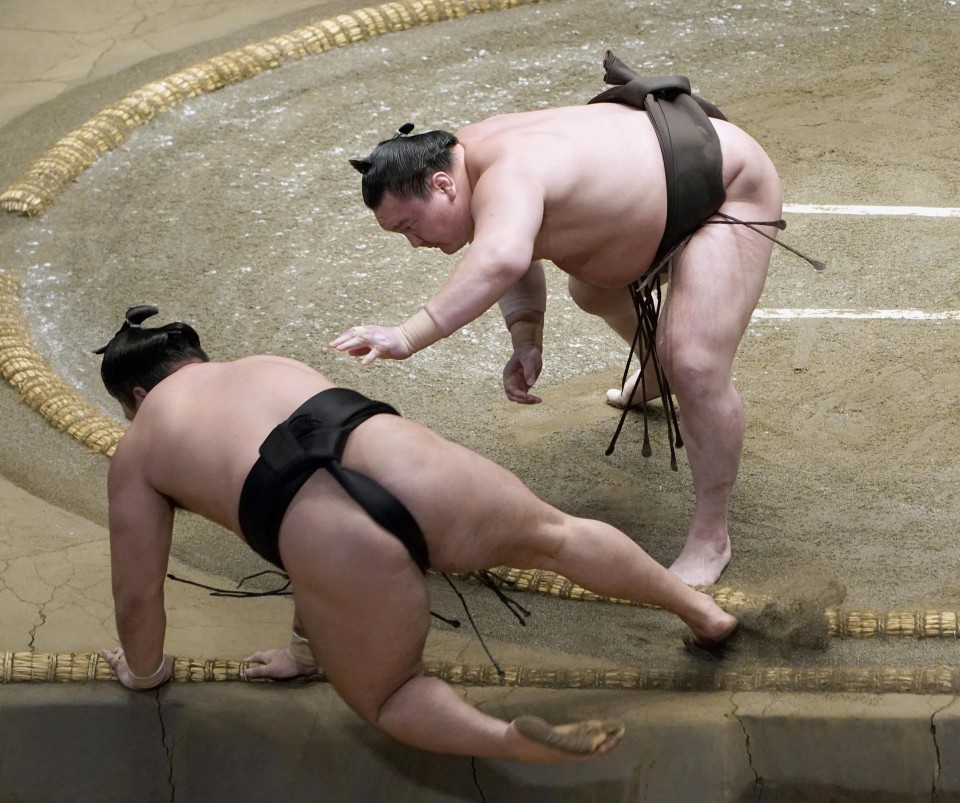 The other overnight co-leader, Mitakeumi (7-0), benefited from the sudden withdrawal of his Day 7 opponent, No. 5 Abi (3-4), who was pulled from the meet by his Shikoroyama stablemaster as a precaution after dining out with guests in Tokyo on Friday night.

Shikoroyama apologized for the untimely gaff during NHK's broadcast, explaining that it runs counter to measures put in place by the Japan Sumo Association aimed at mitigating the risk of spreading the novel coronavirus, including prohibiting wrestlers from going outdoors in general. 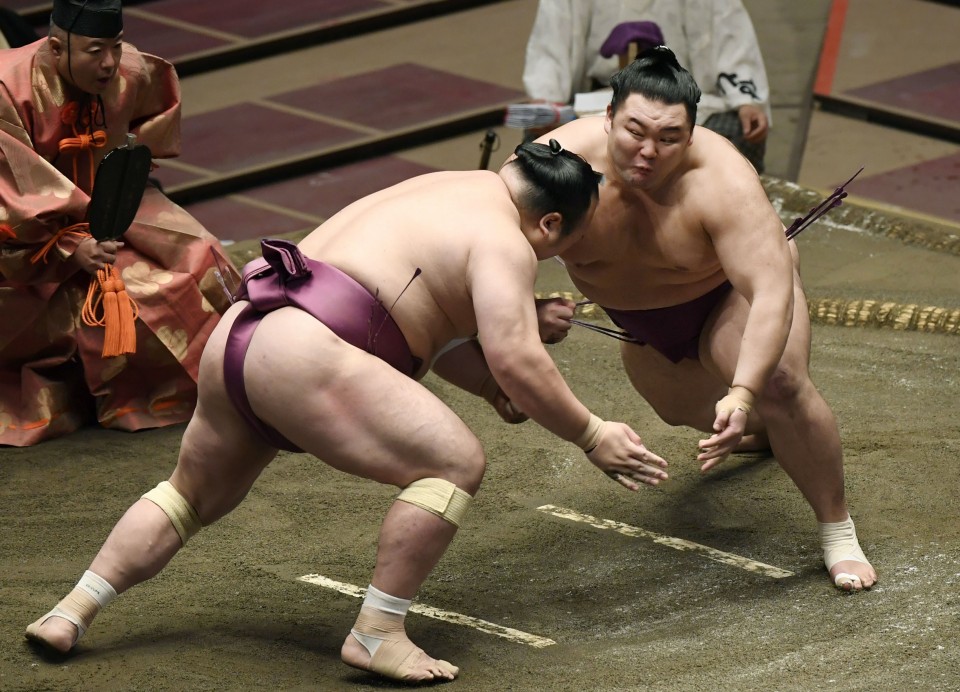 The July tournament was moved from its normal location in Nagoya to Tokyo to limit travel during the 15-day meet, before the capital began to see a steep rise in infections.

Hakuho's opponent on Day 8 will be No. 4 Kagayaki, whom he defeated in their only other prior matchup. Asanoyama will seek his eighth straight win against No. 4 Aoiyama, while Mitakeumi will look to notch a victory over rival sekiwake Shodai.

Shodai (6-1) defeated Aoiyama (3-4) to stay in the fight for the year's third Emperor's Cup. The Bulgarian had Shodai on the ropes and nearly bulldozed him out twice, but some fancy footwork helped Shodai escape and avoid a second loss. 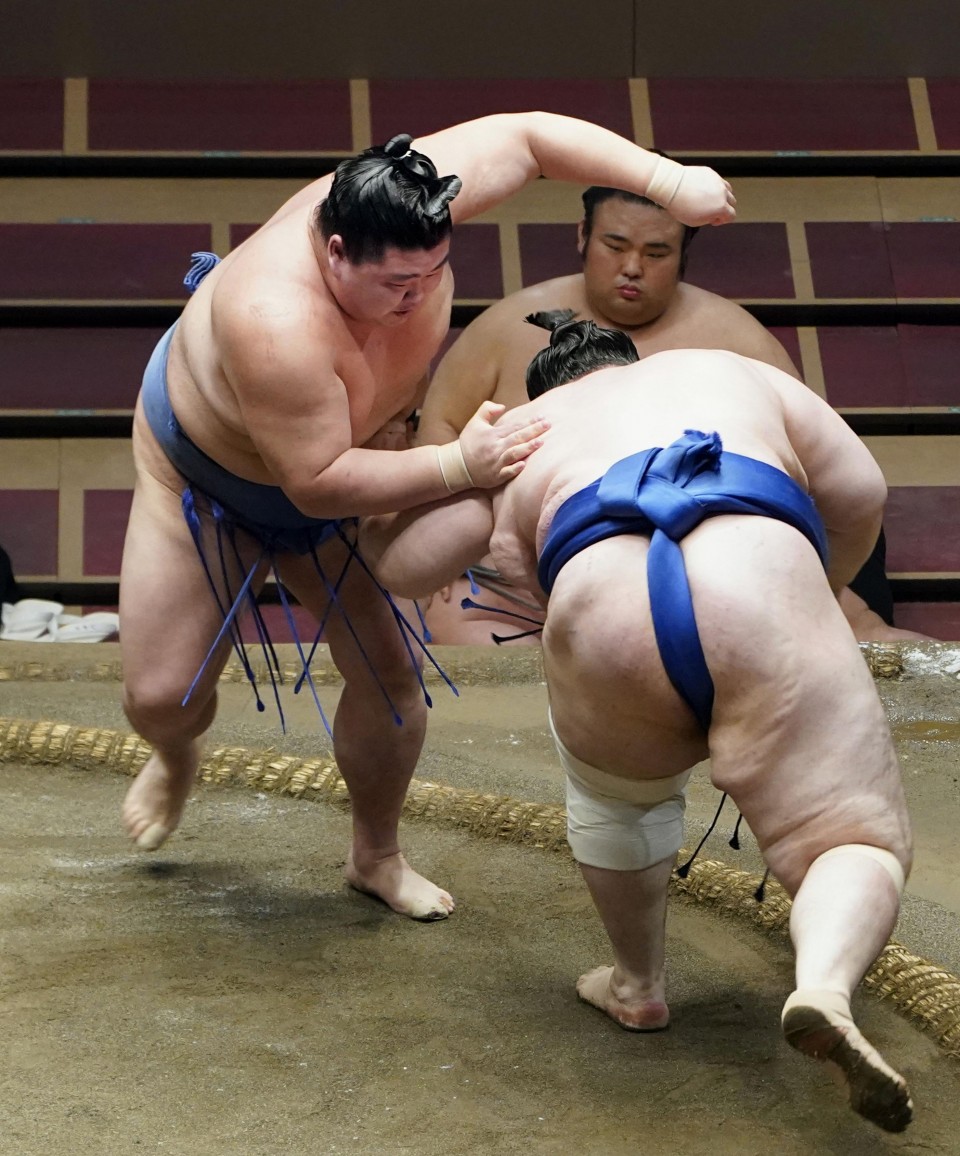 Takakeisho improved to 5-2 and now needs three more wins to keep his position at sumo's second-highest rank. The demotion-threatened "kadoban" ozeki slipped around Kagayaki (3-4) and thrust him down as Kagayaki's momentum carried him past.

Daieisho (4-3) came out on top in a komusubi showdown with Okinoumi (3-4). Okinoumi plowed Daieisho back with a strong initial charge, but Okinoumi secured a hold on Daieisho's belt and muscled him over the straw.

Among the rank-and-file, No. 17 Terunofuji, No. 15 Kotoshoho and No. 10 Myogiryu all prevailed on Day 7 to remain one win off the pace.

No. 9 Tamawashi (5-2) fell further down the leaderboard after being outmaneuvered by No. 6 Enho (4-3). The Mongolian grappler had the division's lightweight wrapped up tight but Enho held his ground and shoved Tamawashi out.

No. 14 Kotoshogiku (5-2) defeated No. 16 Nishikigi (2-5) to amass his 713th career win in the elite makuuchi division. The former ozeki is seventh on the all-time list. He had been tied for seventh on 712 wins with former yokozuna Harumafuji. 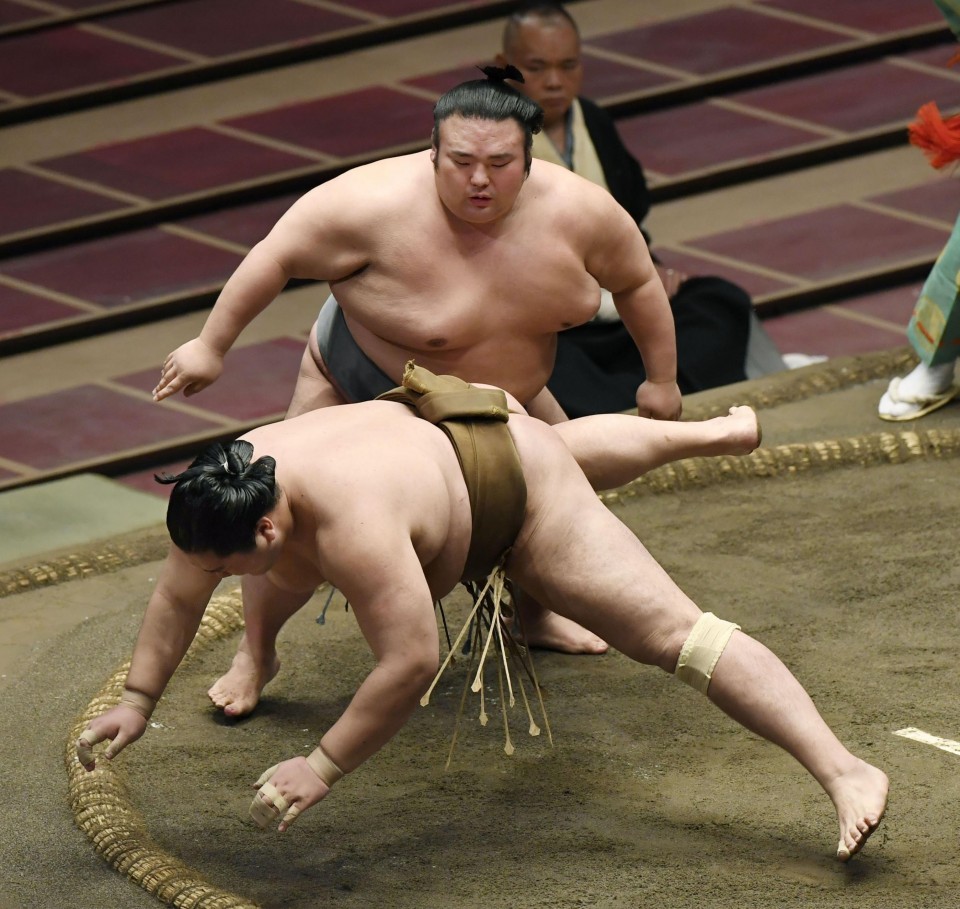 Takakeisho (back) and Kagayaki (Kyodo)