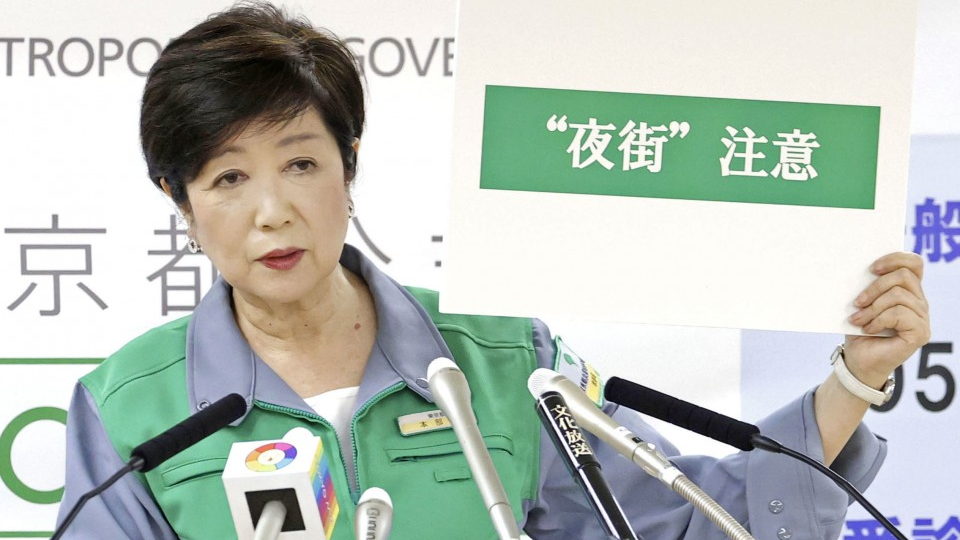 TOKYO - The Tokyo metropolitan government reported Wednesday 67 new coronavirus infections, the highest number of daily cases since a state of emergency for the capital was lifted more than a month ago.

The number, up from 54 on Tuesday, came amid growing concern over a second wave of infections in the capital after business and social restrictions were eased in stages.

The figure topped 50 for the sixth straight day, bringing Tokyo's cumulative total to 6,292. Of the 67, 35 were in their 20s and 14 were in their 30s, together accounting for 73 percent of the total, while the infection routes of 20 were unknown, according to the metropolitan government.

It said 27 cases were connected to nightlife districts and there were 15 patients with no symptoms.

Since the state of emergency was lifted on May 25, the previous high was 60 reported on Sunday. Including the weeks prior to the end of the emergency, Wednesday's figure is the highest since May 4, when Tokyo reported 87 new cases.

While many new infections have recently been reported among young people, who have visited or work at nightlife establishments, the metropolitan government on Tuesday unveiled new criteria for its warning system that will rely more on the advice of medical professionals.

Unlike the earlier "Tokyo alert" system, it has no numerical targets to trigger a public warning. The alert was issued to call for caution on June 2 but was lifted nine days later, before the metropolitan government's decision to permit nightclubs and similar entertainment establishments to reopen.

Tokyo Gov. Yuriko Koike has said the infection situation and the capital's medical preparedness will from now on be evaluated more comprehensively by the metropolitan government's "monitoring council" based on seven criteria, including the numbers of new patients, hospitalized people and those in serious condition.

On Wednesday, Japan saw a total of 120 new cases, bringing the total to more than 18,800, not including the 712 from the Diamond Princess cruise ship that was quarantined in Yokohama near Tokyo in February.