Japan will begin a subsidy campaign on July 22 to boost domestic tourism hit by the novel coronavirus, the tourism minister said Friday, although concerns remain over a resurgence of infections.

The Go To Travel Campaign will eventually subsidize up to half of expenses, including accommodation and transport fees, with the government initially providing discounts worth 35 percent of total costs.

The remaining 15 percent will be covered by coupons to be issued after September, to be used at travel destinations for food, shopping and other travel activities, according to the tourism ministry.

Those who have already made reservations for trips planned from July 22 onward will also receive discounts after returning by applying to the campaign operators, consisting of the Japan Association of Travel Agents and travel agency JTB Corp. among others. 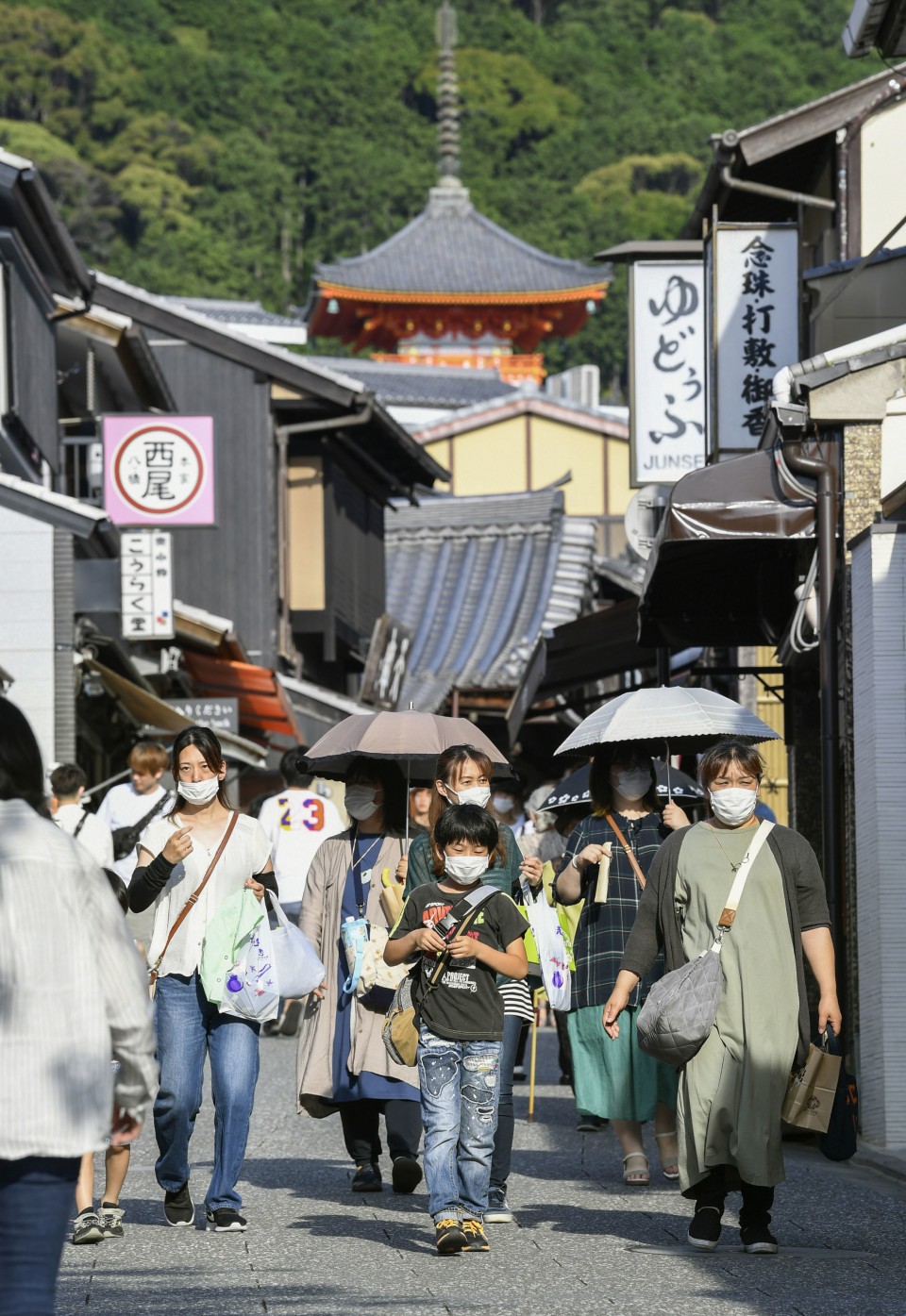 People walk near Kiyomizu temple in Kyoto on June 20, 2020, the first weekend since Japan lifted its final advisories on inter-prefecture travel, based on the belief that the spread of the novel coronavirus has been kept in check. (Kyodo)

"We will be vigilant and closely monitor the virus situation, while avoiding the '3Cs' by cooperating with local municipalities," said tourism minister Kazuyoshi Akaba, referring to confined spaces, crowded places and close-contact settings, amid a recent surge in confirmed coronavirus cases.

The minister also asked accommodation facilities and travelers to take thorough preventative measures against the virus.

The number of daily new coronavirus infections in Japan reached 356 on Thursday, the highest figure since the state of emergency was lifted in May, while Tokyo on Friday reported a single-day record of 243. The nationwide total stands above 20,700, excluding 712 from the Diamond Princess cruise ship, quarantined near Tokyo in February.

Boats in Tokyo harbor light up to create hope amid pandemic

Under the campaign, the central government will subsidize up to 20,000 yen ($190) per person for each overnight stay, and 10,000 yen for day trips including transportation costs.

The state subsidies will be in addition to discounts provided by local municipalities.

The Japan Tourism Agency said it will consider limiting the use of the campaign if promoting domestic trips leads to an increase in the number of new virus cases.

"We will respond accordingly to government decisions and expert opinions," the agency said.

The campaign was initially slated to begin in August, but was moved forward ahead of a four-day national holiday weekend starting from July 23, according to Akaba.

That timing means the campaign will be "very effective," said an official of a tourism group in Iwate Prefecture, the only prefecture in Japan with no virus case reported.

"But there are people who don't believe it's a good idea to invite tourists from other prefectures that have been fighting infections," the official added.

The government's wider Go To Campaign is aimed at helping local economies that have been struggling due to the pandemic. On top of tourism, it aids restaurants, events and local shopping streets.

The estimated commission costs for the travel campaign, to be paid to a consortium of contractors consisting of seven entities picked from five bidders, total 189.5 billion yen, approximately 40 billion yen less than the maximum amount projected by the government.

The government had drawn criticism for the estimated commission fees of up to 309.5 billion yen for the entire Go To Campaign, with critics deeming them a waste of taxpayers' money.