The re-election of Tokyo Gov. Yuriko Koike may provide short-term relief to Prime Minister Shinzo Abe, with the shared goal of a successful Tokyo Olympics and Paralympics next year holding the longtime rivals together.

Koike is expected to play it safe as she enters her four-year second-term, and continue to repair ties with Abe's Liberal Democratic Party that were damaged after she ran to become the first female governor of the Japanese capital in 2016 against the party's will.

Political observers say Koike, 67, will hold her fire as Tokyo governor amid the coronavirus crisis. However, she is still aiming higher, and the mending process with the LDP is part of her preparatory work to return to national politics.

As public support has dwindled due to scandals and the administration's oft-criticized coronavirus response, Abe himself cannot afford political turmoil, with vivid memories of Koike's attempt to turn against the LDP.

"It's a natural course of action for Koike to return to national politics after securing her place as Tokyo governor and looking at the (political) situation," said Naoto Nonaka, a professor of comparative politics at Gakushuin University. 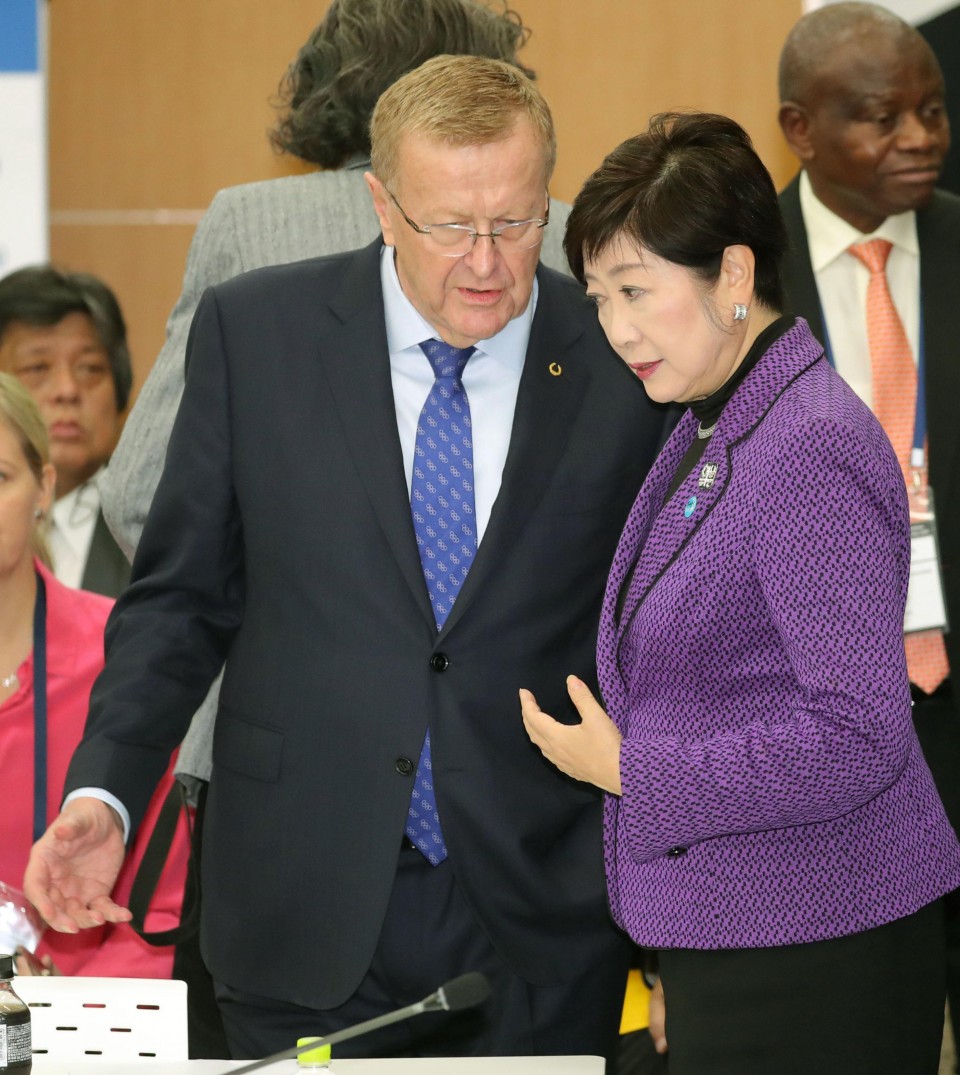 Koike, a former lower house member who served as defense and environment ministers, has dismissed the view that she wants to return to national politics.

"It's not on my mind," Koike said during a press conference to announce her candidacy in June, though few people, including Nonaka, take her word at face value.

"Steering the metropolitan government is dynamic and rewarding. That's why I jumped off a cliff, switching from national to local politics," she said.

Both Koike and Osaka Gov. Hirofumi Yoshimura have polished their image as strong local leaders in their handling of the coronavirus epidemic in Japan.

Some experts say the former news anchor Koike, keeping that public image, will be tempted to return to national politics and get into the limelight.

To do so, some believe she will mend fences with the LDP and eventually rejoin it, while others say she will choose a different path.

Masahiro Iwasaki, a political science professor at Nihon University, said the "loose coalition" between Koike and the LDP is the most viable choice after the Tokyo election.

"She has learned the hard way that it's not wise to go against the LDP after her attempt (in 2017) with the creation of the Party of Hope failed. So it's not realistic to think she will again create a party," Iwasaki said.

While Koike grabbed the spotlight back with her coronavirus response, Abe has struggled. In a Kyodo News poll in late June, the approval rate for the Abe Cabinet hit 36.7 percent compared with the disapproval rate of 49.7 percent.

Still, the prime minister has found some solace as the opposition bloc remains fractured, failing to become a viable alternative.

"With the Abe administration losing its grip, if the opposition remains as it is without presenting an alternative framework (for a new administration) and discontent with the LDP grows, there is a chance that Koike will become a choice (among dissatisfied voters)," Gakushuin's Nonaka said.

In the Tokyo gubernatorial race, Koike ran as an independent. The Democratic Party for the People did not join the Constitutional Democratic Party of Japan and two other opposition parties in throwing support behind lawyer Kenji Utsunomiya.

The opposition's failure to form a joint front bodes ill for the next lower house election that must be held by October 2021, with speculation already swirling that it may come as early as this fall.

The national poll is critical for Abe, too, as eyes are increasingly on who will succeed the premier, whose current term as LDP head ends in September 2021.

Shigeru Ishiba, a former LDP secretary general who has also served as defense minister and minister for regional revitalization, ranks high in media polls as a candidate to be the next prime minister. However, he does not have broad support from other LDP lawmakers.

Despite uncertainty persisting over whether the global coronavirus pandemic will subside by the rescheduled Tokyo Games, it remains a key event for both Koike and Abe, who would want to witness it in their current capacity.

Once the sporting event is over, Koike may gradually shift gears.

"The best scenario is that she will return to the LDP at its request instead of her asking the party to allow her in. This will keep her hopes alive for the premiership," Iwasaki of Nihon University said. "After all, she is a woman of action."