Following the postponement of his ozeki debut, ascendant star Asanoyama will fight from sumo's second-highest rank for the first time at the relocated July grand tournament opening Sunday.

The 26-year-old, promoted to ozeki in May, was considered a strong candidate to win the Summer Grand Sumo Tournament later that month before the coronavirus crisis forced its cancellation.

The popular Takasago stable grappler, who won his sole Emperor's Cup at last year's summer meet, has strived to maintain his momentum for the July grand tournament, which has been moved from Nagoya to Tokyo's Ryogoku Kokugikan.

Combined photo shows sumo wrestlers (from L) Asanoyama, Hakuho and Kakuryu. The three will draw the focus of attention at the July Grand Sumo Tournament beginning July 19, 2020, in Tokyo. (Kyodo)

With visits to other stables off-limits after restarting his training last month, he sparred with lower-ranked wrestlers to gain match fitness, focusing on hitting low from the jump and fighting with a right-hand inside grip. If he manages to win it all, he will be the first new ozeki to lift the Emperors Cup since Hakuho did so in May 2006.

Hakuho and fellow Mongolian-born grand champion Kakuryu will start from their familiar positions as favorites for the 15-day tournament, which will be fought in front of just 2,500 spectators a day as a safety measure to prevent the spread of the pneumonia-causing coronavirus.

The Japan Sumo Association shifted the meet from Nagoya to avoid large numbers of fans converging on the city in central Japan. It initially considered barring spectators, in similar fashion to the March grand tournament in Osaka, before deciding to admit a limited number per day. 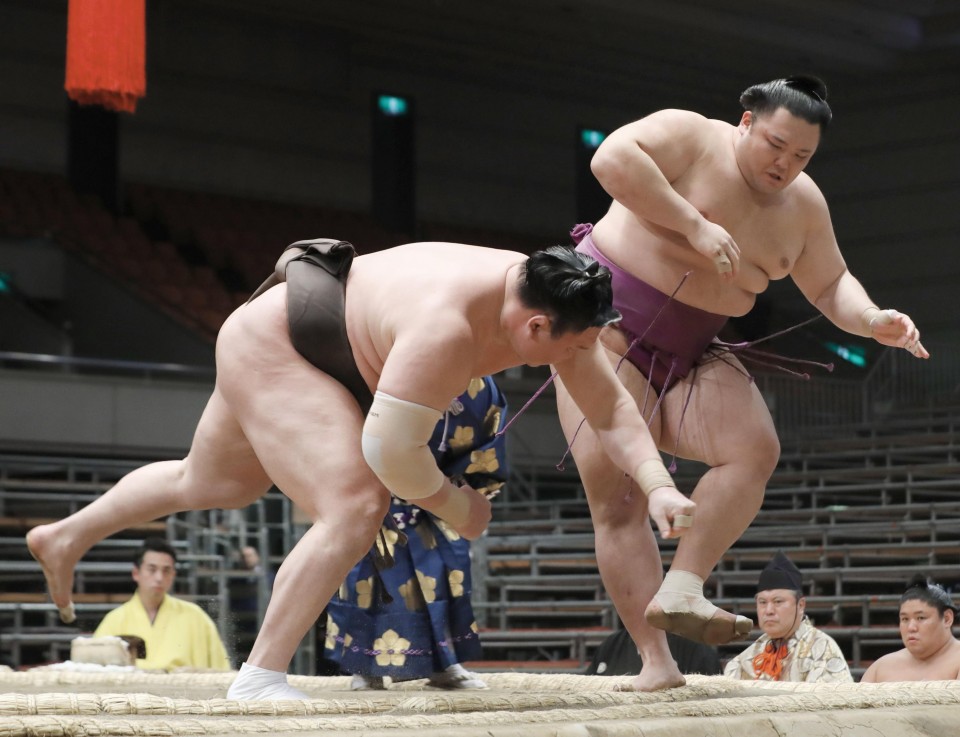 Grand champion Hakuho (L) defeats Asanoyama on the 13th day of the Spring Grand Sumo Tournament at an empty Edion Arena Osaka on March 20, 2020. The tournament has been held behind closed doors due to the coronavirus outbreak. (Kyodo)

Though less dominant than at his peak, the 35-year-old Hakuho remains the man to beat as he fights for a record-extending 45th Emperor's Cup.

The all-time great claimed No. 44 with a 13-2 record in Osaka, at the first grand tournament to be held behind closed doors.

Looking untroubled by any of the ailments that have slowed him in recent times, Hakuho should be in contention at the business end of the meet provided he avoids early hurdles.

Kakuryu, runner-up to Hakuho in Osaka, will aim to overcome his recent struggles against pusher-thruster opponents and win his first title since emerging victorious last July in Nagoya. 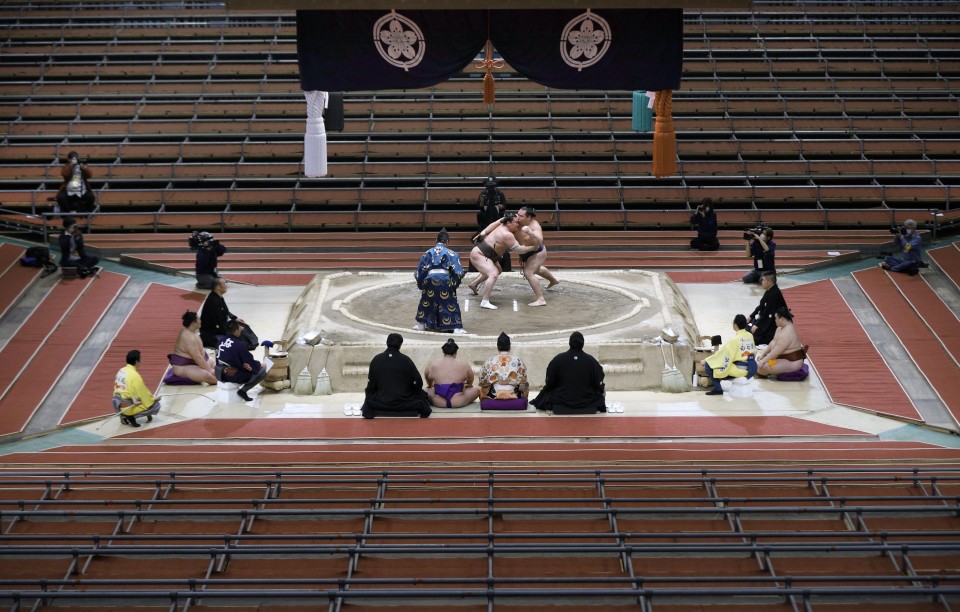 Hakuho (L) takes on fellow grand champion Kakuryu on the 15th day of the Spring Grand Sumo Tournament at an empty Edion Arena Osaka on March 22, 2020. Hakuho won, seizing a record-extending 44th top-level championship at the tournament, which was held behind closed doors due to the outbreak of the new coronavirus. (Kyodo)

The other ozeki, Takakeisho, is competing for the second time in his career as a demotion-threatened "kadoban." To keep his rank, he must win at least eight bouts.

The 23-year-old powerhouse could be in for a tough battle, however, given limited opportunities to gain match readiness after struggling with an injured left leg.

At the other end of the rankings, highly touted youngster Kotoshoho is set to turn heads when he makes his debut in the elite makuuchi division. The 20-year-old Sadogatake stable wrestler will compete as a No. 15 maegashira.

Former ozeki Terunofuji, meanwhile, will try to continue his career resurrection, returning to the top division as a No. 17.

With wrestlers required to take a number of precautions against the coronavirus, such as donning masks while waiting for their bouts, adjusting to the unusual circumstances could be a key to the tournament.