A Japanese court ruled Wednesday that state health care benefits should be extended to people who were exposed to radioactive "black rain" after the 1945 U.S. atomic bombing of Hiroshima outside a zone currently recognized by the government.

The Hiroshima District Court ruled in favor of a suit filed by 84 plaintiffs in their 70s to 90s. It said they should receive the same health care benefits as provided for atomic bomb survivors who were in the zone where the state has recognized black rain fell.

It is the first court decision regarding the boundary of the area affected by radioactive rain and subsequent health problems among survivors. 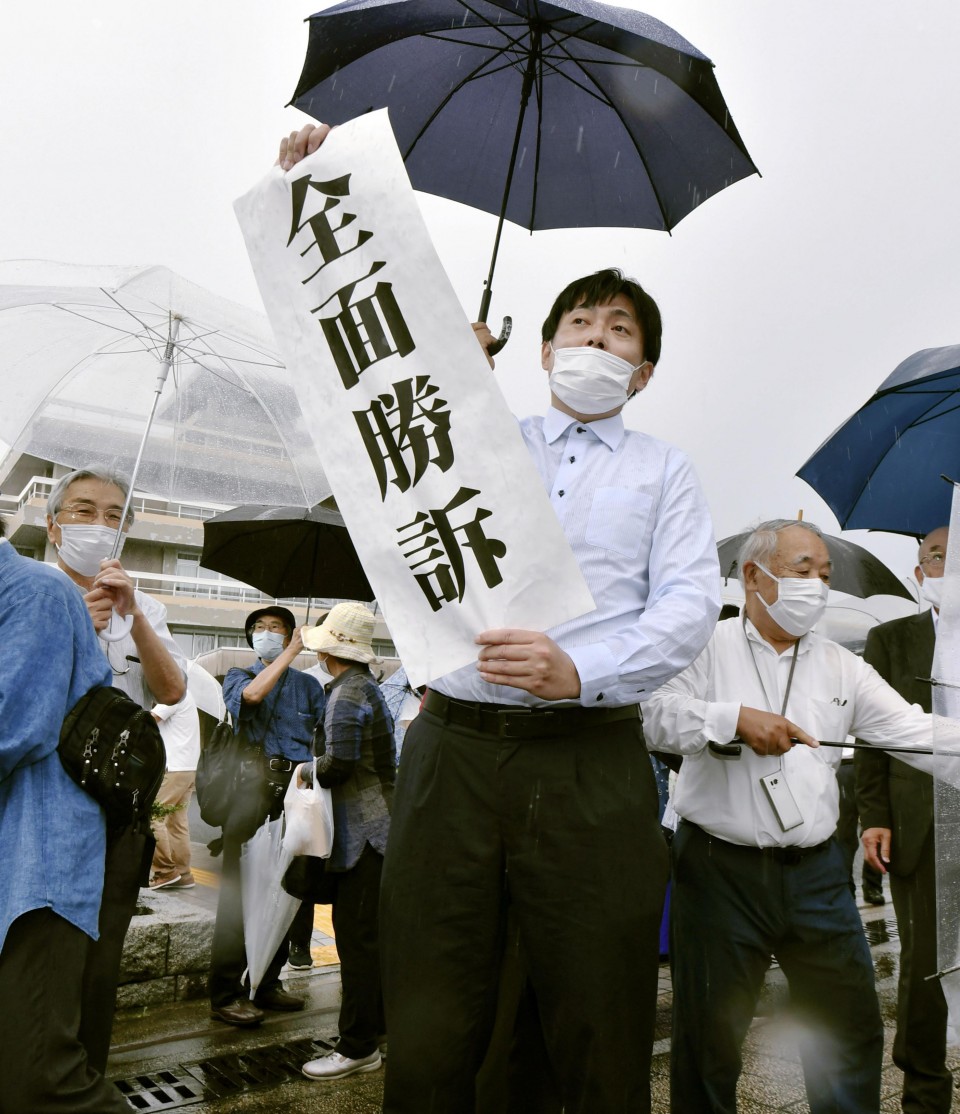 A lawyer representing plaintiffs in a lawsuit demanding that state health care benefits be extended to people who were exposed to radioactive "black rain" after the 1945 U.S. atomic bombing of Hiroshima outside a zone currently recognized by the government holds up a sign after the Hiroshima District Court ruled in favor of the suit on July 29, 2020. (Kyodo)

Presiding Judge Yoshiyuki Takashima said, "It is possible black rain fell outside the designated zone and reasonable to conclude that they were affected by radiation if they were exposed (to such rain.)"

The court then determined that the plaintiffs developed diseases specific to atomic bomb survivors due to the effect of black rain.

The designated area lies northwest of the hypocenter of the atomic bombing on Aug. 6, 1945, in the final days of World War II and measures about 19 kilometers in length and 11 km in width.

The 84 plaintiffs including deceased individuals represented by family members developed such illnesses as cancer and cataracts after they were exposed to black rain containing radioactive materials outside the designated area and consumed contaminated food and water.

The plaintiffs sued the Hiroshima city and prefectural governments from 2015, seeking the nullification of their decisions.

The local governments insisted there was no scientific evidence that radioactive rain fell on areas outside the designated zone and the plaintiffs' health problems were caused by their exposure to radiation.

Three days after the Hiroshima bombing, another nuclear bomb was dropped on Nagasaki, southwestern Japan.

They are those who were directly exposed to the bombing, people who entered within 2 km from the hypocenters of Hiroshima or Nagasaki in the period of two weeks from the attacks, those who were affected by radiation while rescuing survivors or other reasons and fetuses exposed to radiation in the womb.

The plaintiffs claimed they fit into the third category.