The Japan Sumo Association said Monday it will allow spectators to attend its July grand tournament in Tokyo despite a recent rise in the number of people infected with the novel coronavirus in the Japanese capital.

The association decided at an extraordinary board meeting to admit about 2,500 fans a day into the tournament at Tokyo's Ryogoku Kokugikan, set to open on July 19.

"By conducting antibody tests for members and establishing guidelines (against the virus), we decided we could welcome spectators safely and hold the July tournament," JSA Chairman Hakkaku said in a statement. 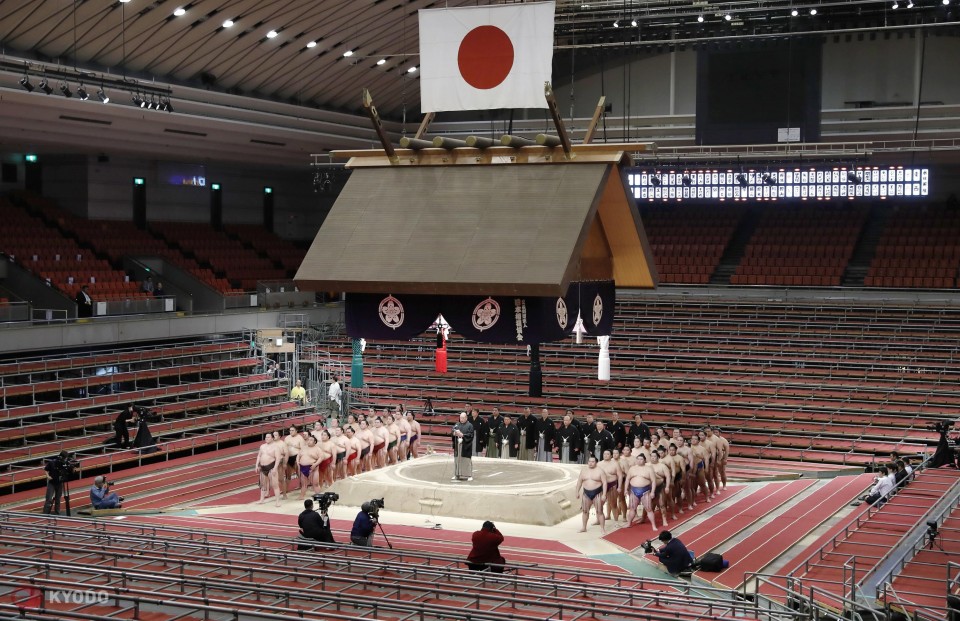 Japan Sumo Association Chairman Hakkaku (on the raised ring) delivers a speech in closing the Spring Grand Sumo Tournament at an empty Edion Arena Osaka on March 22, 2020. The tournament was held behind closed doors due to the outbreak of the new coronavirus. (Kyodo)

"Wrestlers have faithfully adhered to our strict regulations against going outdoors and our infection prevention measures. We are confident they will offer exciting action in the ring and meet the expectations of our fans."

The 15-day meet, which was delayed by two weeks from its original schedule, was moved from Nagoya, central Japan, to the capital to limit travel during the pandemic. Many sumo stables are based in Tokyo.

The sumo meet will be the latest sporting event in Japan to be held in front of a crowd. Japan's professional baseball and soccer leagues began permitting a limited number of fans to attend games from Friday in line with government guidelines.

The JSA also decided to move November's Kyushu Grand Sumo Tournament from Fukuoka in southwestern Japan to Tokyo in response to the virus.

The July basho will be the first sumo tournament held in roughly four months as concerns about the coronavirus prompted the JSA to scrap the Summer Grand Tournament in May.

The sport's governing body had originally planned to hold the July tournament without spectators, as it did for the March meet. This year's Spring Grand Sumo Tournament in Osaka was held behind closed doors for the first time in sumo's history.

The JSA has put in place several measures to prevent the spread of the virus, including prohibiting wrestlers from going outdoors in principle and asking them to refrain from training at different stables.

Antibody tests were also carried out to confirm a history of coronavirus infection for association members who wished to be tested.

Several JSA members have tested positive for the novel coronavirus. In May, a 28-year-old lower-division wrestler died due to multiple organ failure caused by the virus.