Sumo: Hakuho falls back to pack with upset loss on Day 11

With his first defeat of the 15-day tournament, the overnight leader fell back into a three-way tie at 10-1 with ozeki Asanoyama and No. 17 maegashira Terunofuji.

In the final bout of Day 11 at Tokyo's Ryogoku Kokugikan, lone competing grand champion Hakuho lost his footing as Daieisho (7-4) blocked his attempt to take a right inside grip from the jump.

From there, the komusubi was able to shove the all-time championship record-holder sideways and push him out before he could regain his balance. 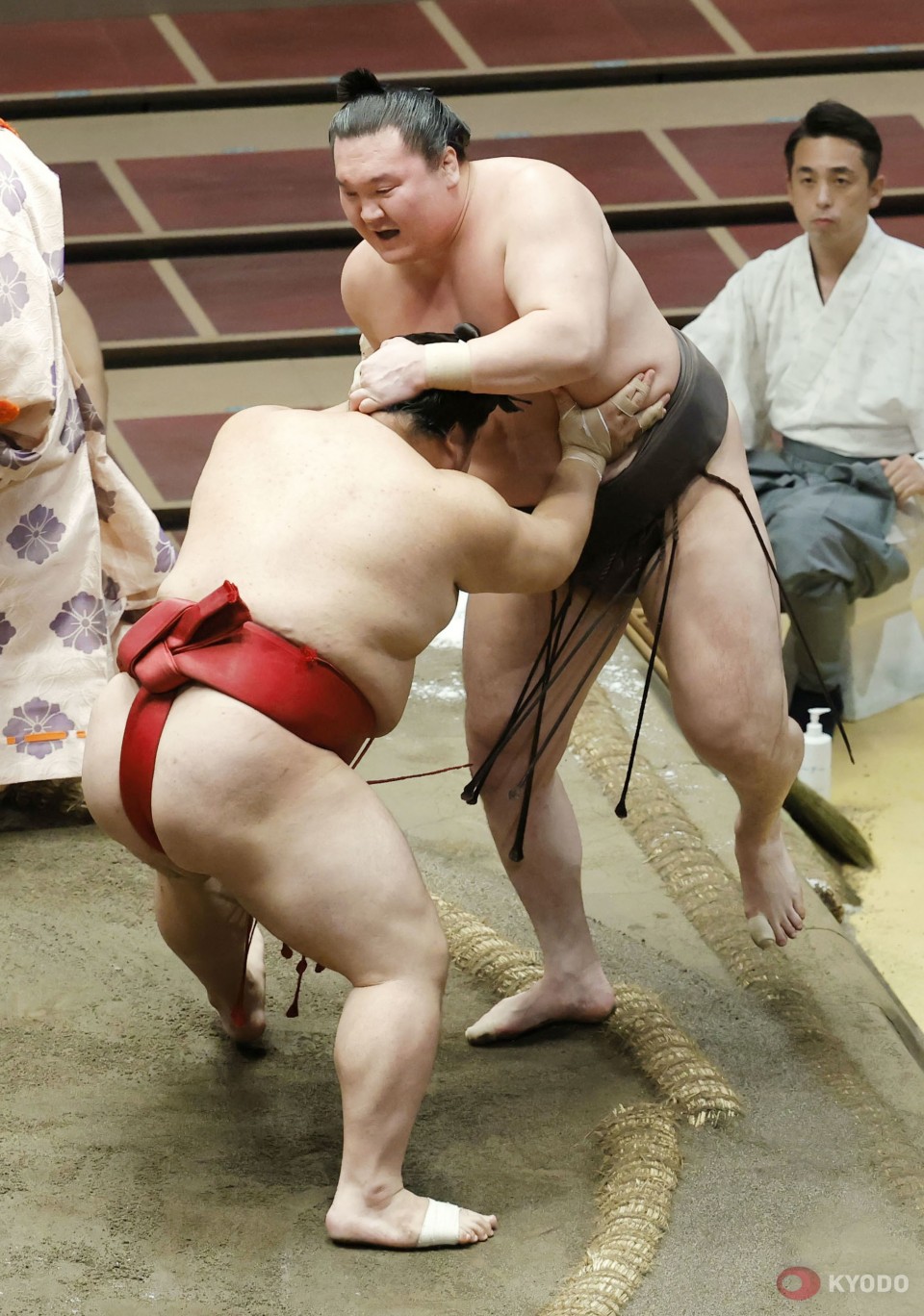 Yokozuna Hakuho (R) is bumped out to his first loss at the hands of komusubi Daieisho on Day 11 of the July Grand Sumo Tournament. (Kyodo)

The win was just the second in eight meetings against Hakuho for Daieisho, who said he stuck to his pushing and thrusting game plan.

Asanoyama had little trouble taking care of No. 4 Kagayaki (4-7), ramming him with a right forearm before wrapping him up and lifting him over the straw.

Former ozeki Terunofuji has the chance to lift the Emperor's Cup in his first top-division tournament since January 2018 after improving to 10-1 with a win over No. 11 Tochinoshin (6-5).

Ozeki Takakeisho pushed out sekiwake Mitakeumi to clinch a winning record at 8-3 and keep his place at sumo's second-highest rank.

The 23-year-old powerhouse, who has been competing here as a demotion-threatened "kadoban" ozeki, launched himself out of the blocks and gave Mitakeumi (8-3) no chance to counter.

The victory was payback for his loss to Mitakeumi in March and evened their head-to-head record at eight wins apiece.

Shodai's title hopes may have suffered a fatal blow with his second straight loss of the 15-day tournament. The sekiwake dropped to 8-3 as he succumbed to No. 5 Hokutofuji (7-4) for the first time in his career.

Hokutofuji, a former komusubi, was quick out of the blocks and yanked Shodai to the clay after the sekiwake lunged forward in search of an inside grip.

No. 14 Kotoshogiku (8-3) secured his first winning record since March last year with a win against No. 7 Terutsuyoshi (5-6).

The veteran former ozeki credited his younger Sadogatake stablemates -- including talented newcomers Kotoshoho and Kotonowaka -- for helping him stay motivated at age 36.

"I've got great training partners who keep me energized and make me feel younger. I've been striving to show my best sumo. All I want to do is fully perform to my capabilities," Kotoshogiku said.

"A lot of people are still expecting better things from me and cheering me on, and I don't want to let them down."

No. 9 Tamawashi (8-3) clinched a winning record for the first time since last November's grand tournament with a victory against Kotoshoho (7-4), who is making his makuuchi debut at No. 15.

Komusubi Okinoumi (6-5) celebrated his 35th birthday by beating No. 3 Takarafuji (4-7) by thrust down. The Hakkaku stable grappler was pushed back by Takarafuji but used his opponent's momentum to execute the winning move at the edge of the ring.