Hong Kong on Wednesday marked the 23rd anniversary of its return to Chinese rule, one day after China imposed a sweeping national security law on the former British colony, with police arresting more than 300 protesters.

The theme of national security reverberated throughout celebratory events and protests, as Hong Kongers digested the law's impact on their lives and the future of the territory. 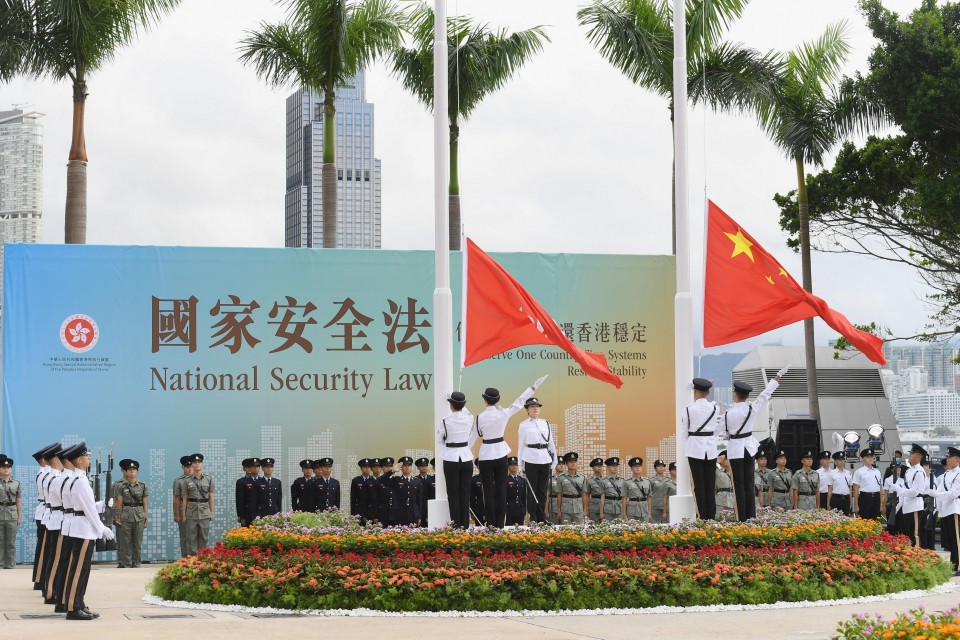 "It is a day of great historical significance," Chief Executive Carrie Lam told guests at an anniversary reception, calling the law's enactment "a turning point to take Hong Kong out of the current impasse and to restore stability and order from the chaos."

Luo Huining, head of the Central Government Liaison Office in Hong Kong, said in a separate event that "for the vast majority of Hong Kong residents including foreigners in Hong Kong, the law will be a guardian that protects their rights, freedoms and peaceful life."

The controversial law, which went into force in Hong Kong shortly before midnight after it was enacted in the Chinese parliament, outlaws acts of separation, subversion, terrorism and collusion with foreign forces.

Many people fear enforcement of the law could undermine the rights and freedoms China had promised for the semiautonomous region for 50 years following its return to Chinese sovereignty in 1997.

"Of course this is a repressive law," a clerk surnamed Lee, 30, said. "The scope of the law is so vague so that it could be used to persecute anyone on target. The Communist Party wants just a law to put in jail those who stood out. You may get a life sentence for chanting independence slogans."

That fear was quickly realized as Hong Kong police said Wednesday they had made at least nine arrests under the new law of five men and four women allegedly holding flags or placards advocating Hong Kong independence.

Including the security law breach cases, the police also arrested more than 300 people in Causeway Bay and adjacent Wan Chai on Hong Kong Island after they gathered on streets, obstructed traffic with bricks and metal road barriers and damaged a cake shop and a Starbucks, targeted for their owner's pro-China stance.

Four officers were injured while on duty, including one who suffered shoulder injuries when under attack by a group of people allegedly helping an arrested person escape.

Thousands of people had gathered in Causeway Bay for an annual July 1 march scheduled for the afternoon despite a police ban due to the coronavirus pandemic. The police broke up the crowd, sending people scattering into nearby roads.

Police fired teargas, pepper spray and used a water cannon truck to disperse the crowd, who repeatedly split and regrouped on streets into the night.

A businessman, identified by surname Chan, 60, said he felt "sad" that the law was imposed because it gives the authorities too much leeway in deciding whether to prosecute or for what offenses. 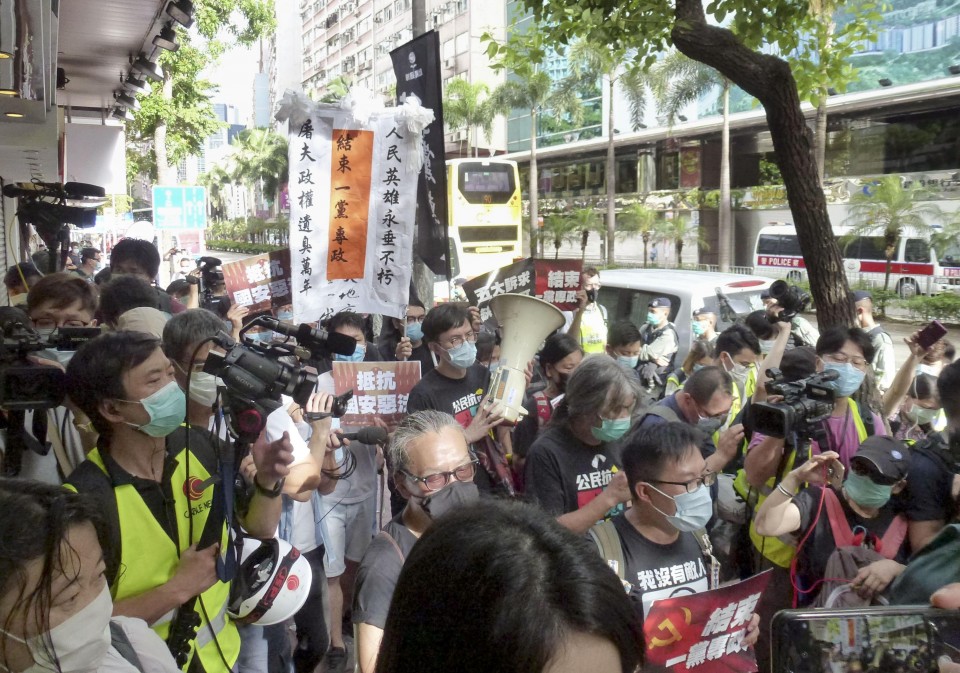 Pro-democracy activists march in Hong Kong on July 1, 2020, in protest against Beijing's enactment of a controversial national security law for the former British colony. (Kyodo)

"'One country, two systems'? It's long gone," Chan said. "But the new law will not scare or deter people from coming out. This generation will not budge. They've got nothing to lose."

Former lawmaker Leung Kwok-hung led about 20 people in a protest march during the early morning flag-raising ceremony in the nearby Wan Chai district.

He said police treated them differently following the enactment of the law, performing body searches before allowing them to move ahead with the protest.

"It's a matter of (inducing) fear," Leung told reporters as the group was barred from accessing the ceremony venue.

"The Hong Kong people enjoy various freedoms, for example, free press, freedom of speech, freedom of association. (They) deserve to enjoy basic rights, human rights of (any) democratic society around the world."

Pro-democracy lawmakers said they are worried about the scope of the law as it criminalizes speech and people who assist suspects in a wide range of alleged offenses.

"People from Taiwan can forget about coming to Hong Kong, since most of them supported the Democratic Progressive Party," Democrat lawmaker James To said. "Their speech could be seen as separating Taiwan, so when they come to Hong Kong for traveling, they would be targeted."

The full text of the law, published by the Hong Kong government late Tuesday, stipulates a wide range of behavior as punishable with the maximum penalty of life imprisonment and the occasions where suspects can be extradited and tried in courts in mainland China.

U.S. Secretary of State Mike Pompeo criticized China's imposition of the law on Hong Kong in a tweet, saying the Chinese Communist Party's "draconian national security law ends free Hong Kong and exposes the Party's greatest fear: the free will and free thinking of its own people."