The announcements come as the administration of U.S. President Donald Trump is pouring massive investment into efforts to deliver millions of doses of a vaccine for the highly contagious virus by January next year, under what it calls "Operation Warp Speed." 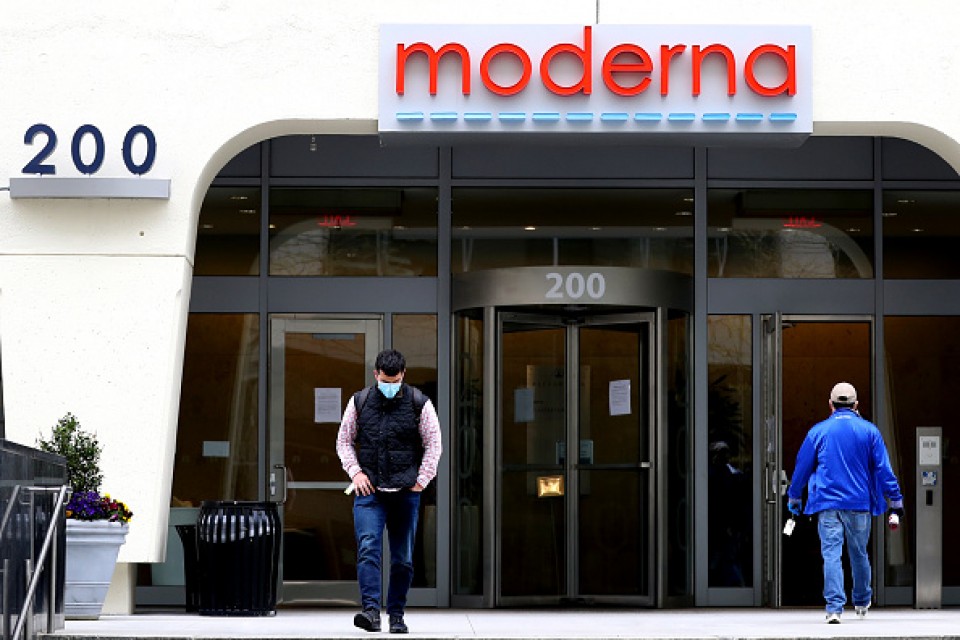 A view of U.S. biotechnology company Moderna Inc.'s headquarters in Cambridge, Massachusetts, on May 8, 2020. (Getty/Kyodo)

Moderna reported earlier this month in a U.S. medical journal that an experimental vaccine proved generally safe and provoked immune responses in all 45 participants in an early-stage test without any serious side effects observed.

Involving 30,000 volunteers aged 18 or older in the United States, the final-stage trial by Moderna is intended to evaluate the safety of the vaccine and to determine if it can prevent symptomatic COVID-19, the disease caused by the virus, after two doses administered approximately 28 days apart.

Moderna said Sunday it will receive an additional $472 million from the U.S. government in support of its vaccine development program, bringing the total amount awarded to the company by the Biomedical Advanced Research and Development Authority to around $955 million.

The study started in the United States and is expected to include approximately 120 clinical investigational sites around the world, such as in Argentina, Brazil, and Germany, Pfizer said in a press release.

The announcements come as recent polls have indicated many Americans are unhappy with Trump's handling of the coronavirus, which has now killed around 147,000 people in the country.

With just under 100 days until the presidential election, Trump appears to be pinning his hopes on the development of a vaccine as a way to turn public opinion.

"Tremendous progress is being made," Trump said as he visited laboratories of a Fujifilm Corp. subsidiary in North Carolina, involved in vaccine candidate manufacturing for U.S. company Novavax Inc.

"By the end of the year, we think we're in very good shape" in terms of vaccines, the president told reporters.

The U.S. government said that it has awarded a $265 million contract to expand manufacturing capacity for COVID-19 vaccines that involves the subsidiary Trump toured Monday, Fujifilm Diosynth Biotechnologies.

Japan to include anti-virus steps in revised nursing care guidelines