Over 800 Chinese vessels caught Pacific flying squid and other marine resources in North Korean waters last year, likely in violation of U.N. sanctions on foreign fishing adopted following Pyongyang's testing of ballistic missiles, according to officials of organizations looking into the issue.

The discovery by Global Fishing Watch and the Outlaw Ocean Project, using satellite data, also suggests that overfishing in the waters has caused a sharp fall in squid catch in neighboring Japan. 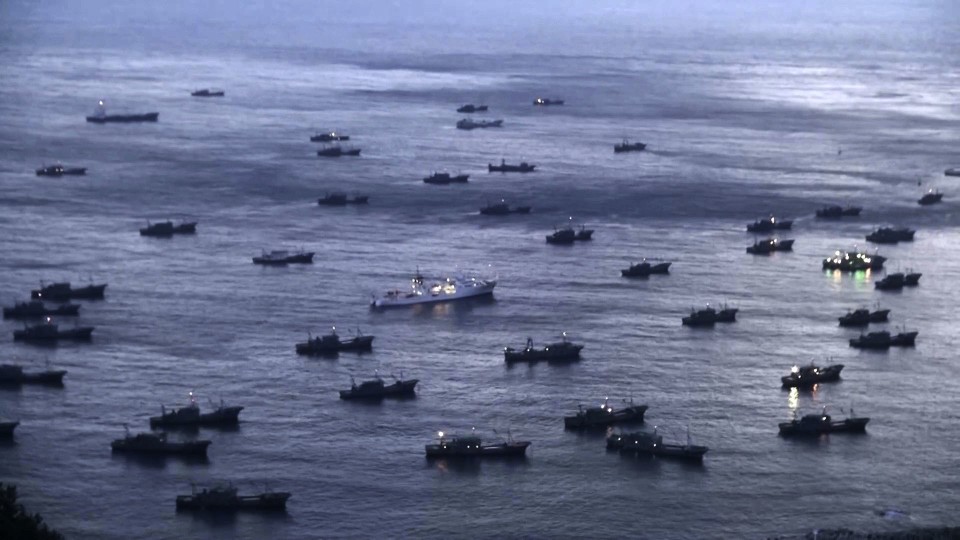 Global Fishing Watch, an ocean conservation nonprofit group co-founded by Google LLC, which released the outcome of the probe last week, also believes that vessels from China have been pushing North Korean wooden boats to fish far off, resulting in more than 100 of them being washed ashore in Japan every year as "ghost boats."

In 2017, the U.N. Security Council imposed the sanctions, prohibiting foreign fishing in North Korean waters, as U.N. members sought to cut the country's source of foreign currency. But some experts have pointed out that Pyongyang has continued to gain money by granting fishing rights to Chinese fishermen.

Global Fishing Watch, which is capable of tracking vessel movements worldwide by using satellite images and artificial intelligence, identified squid-fishing vessels by their large lighting arms used to lure squid and found they were from China by tracing their paths.

It also picked out those vessels that move in pairs and spread a net together, a common Chinese fishing method.

The report said such Chinese vessels likely caught almost as much Pacific flying squid as Japan and South Korea combined -- more than 160,000 tons worth over $440 million (47 billion yen) in 2017 and 2018.

"The scale of the fleet involved in this illegal fishing is about one-third the size of China's entire distant water fishing fleet," said Jaeyoon Park, senior data scientist at Global Fishing Watch. "It is the largest known case of illegal fishing perpetrated by vessels originating from one country operating in another nation's waters."

The study claims the vessels pose a huge challenge for squid stock management, with reported catches plummeting in Japanese and South Korean waters. 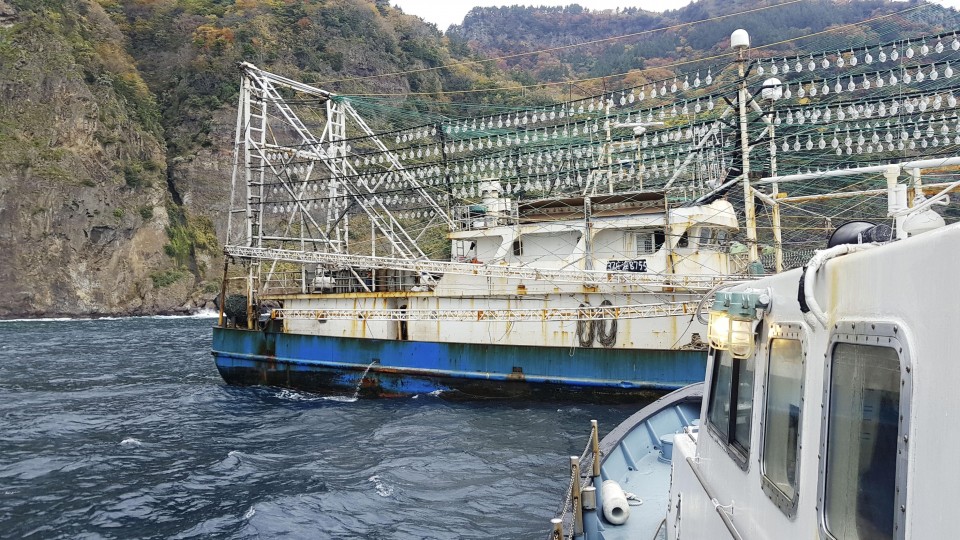 A Chinese squid-fishing vessel, equipped with numerous lamps for luring squids, is anchored in waters near South Korea's Ulleungdo, is pictured in this undated supplied photo. (Copyright The Outlaw Ocean Project)(Kyodo)

The agency says accurately assessing the resource has become more difficult due to a lack of information regarding the amount of catches by China and North Korea and where they are fishing.

The fishing by Chinese vessels is apparently taking a toll on the North Korean fishermen as well.

"Competition from the industrial Chinese trawlers is likely displacing the North Korean fishermen, pushing them into neighboring Russian waters," said Lee Jung Sam of the Korea Maritime Institute involved in the study. "The North Koreans' smaller wooden boats are ill-equipped for this long-distance travel."

Hundreds of North Korean wooden boats have washed ashore on Japanese and Russian coasts in recent years, with many carrying corpses of those who apparently died at sea.