A panel under the justice minister proposed Tuesday establishing criminal penalties for foreign nationals who do not comply with deportation orders as Japan seeks to curb long-term detention of foreigners at immigration facilities.

The Immigration Services Agency of Japan is expected to consider drafting revisions to the immigration law based on the panel's proposals to Justice Minister Masako Mori to include imprisonment or fines for those resisting deportation.

Supporters, however, worry the move could lead to lawyers and volunteer workers helping foreigners avoid deportation being charged as accomplices.

Japan has long been criticized by bar associations and human rights groups for long-term detention of foreign nationals who refuse to accept deportation on the grounds that they are seeking to be recognized as refugees or have families in the country. 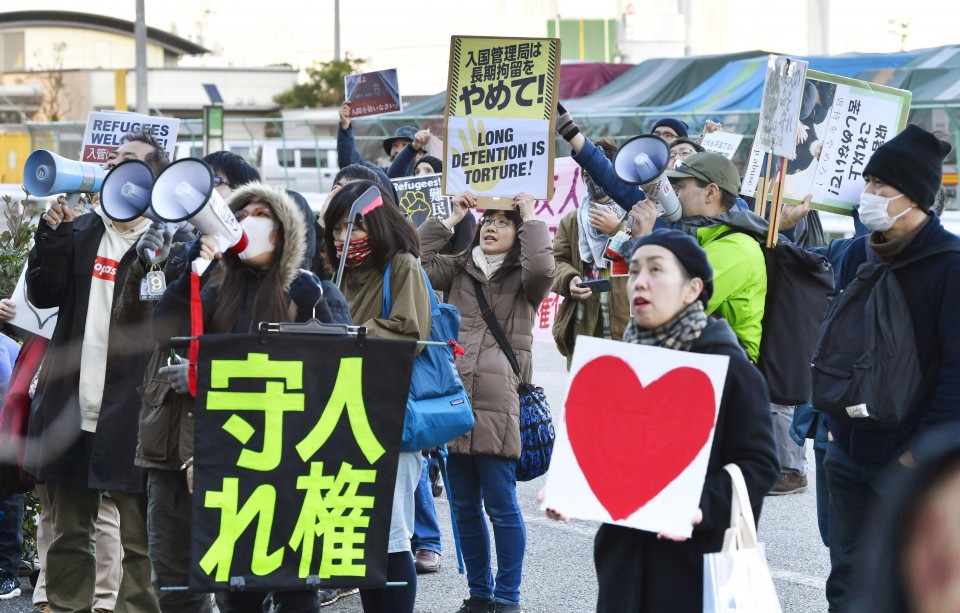 The panel was set up last October to review the system following the death in June last year of a Nigerian man in his 40s who had gone on hunger strike at an immigration center in Omura, Nagasaki Prefecture, over his prolonged detention, marking the first such death in Japan.

The man had been detained since July 2016 and refused to be deported because he had family in Japan.

Those facing deportation in Japan are expected to leave at their own expense unless they lack the financial resources to do so. The government says it does not have either the funds or manpower to deport those financially capable to leaving if they refuse to do so.

Alongside calling for criminal penalties, the panel also suggested shortening the period Japan bans re-entry of individuals who leave Japan on deportation orders to encourage compliance.

In addition, it sought clarification of the terms and conditions for allowing provisional release of those held on deportation orders and consideration of whether to penalize those who go missing following release. The panel also urged the justice minister to study alternative measures to detaining those facing deportation.

While there was debate among the panel on setting an upper limit to the period of detention, it was not included in the proposals as some members voiced worries that some people could be released despite concerns of them absconding.

The panel instead called for creating a system for reviewing the need for continued detention after a certain period of time.

Critics, however, say Japan's refugee recognition system is flawed. Last year, the country only certified 44 people as refugees among 10,375 people who sought asylum, including 461, or some 4 percent, who repeatedly applied for the status, according to the immigration agency.

As of the end of last year, 1,054 foreigners had been detained in immigration centers across Japan, of whom 462 had been in detention for over six months, the agency said.