Japan started allowing on Friday up to 5,000 people to attend sporting and other events, despite a recent rise in the number of people infected with the novel coronavirus.

Japan's professional baseball and soccer leagues began admitting spectators to games in line with government guidelines that raised the cap on spectators from 1,000.

The evening's schedule featured the Central League-leading Yomiuri Giants facing the Yakult Swallows among six Nippon Professional Baseball games, although their game in Kobe was rained out. An hour after the baseball games started, the J-League welcomed back fans at a second-division match between Fagiano Okayama and Giravanz Kitakyushu.

A fan who traveled from Wakayama Prefecture to cheer on the Swallows expressed reservations about crowds indoors.

"It's OK if it's outdoors, but wouldn't games in domes and the like increase the risk of infection?" he said. 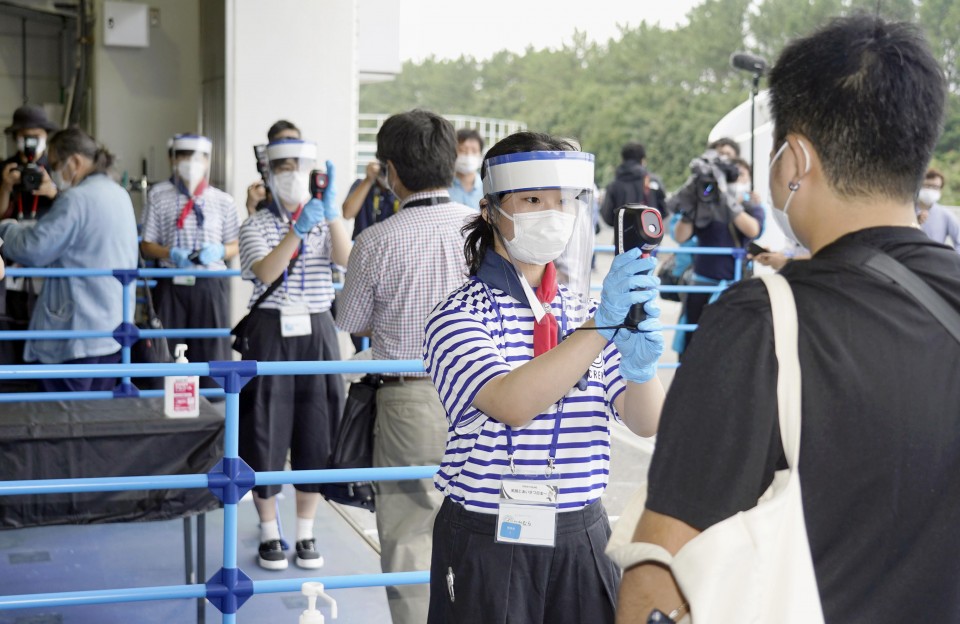 Fans have their temperatures checked before entering Zozo Marine Stadium in Chiba, near Tokyo, on July 10, 2020. Japanese professional baseball started admitting up to 5,000 spectators per game the same day, three weeks after the coronavirus-delayed start of the season. (Kyodo)

Hotaka Yamakawa, who has led NPB's Pacific League in home runs the past two seasons, homered in the first inning at Chiba's Zozo Marine Stadium for the Seibu Lions in their game against the Lotte Marines.

"Being able to play in front of everyone gives you a feeling of joy," he said.

Unable to take part in the traditional organizing chanting and cheering that accompany every at-bat in Asian baseball games, the fans responded individually to each play, giving the games more of the feeling of ballgames played in the United States.

Tomoya Sato, a 21-year-old university student from Chiba, took in the Marines-Lions game, and like Yamakawa, said that the true joy was enjoying the experience with others.

"Sharing the excitement with others is the real pleasure of being there in person," Sato said.

At Koshien Stadium near Osaka, fans who had been asked to refrain from shouting, responded to a home run by the hometown Hanshin Tigers' Koji Chikamoto by clapping and banging megaphones together.

J-League first-division fans will get a chance to see their favorite clubs in action on the weekend. 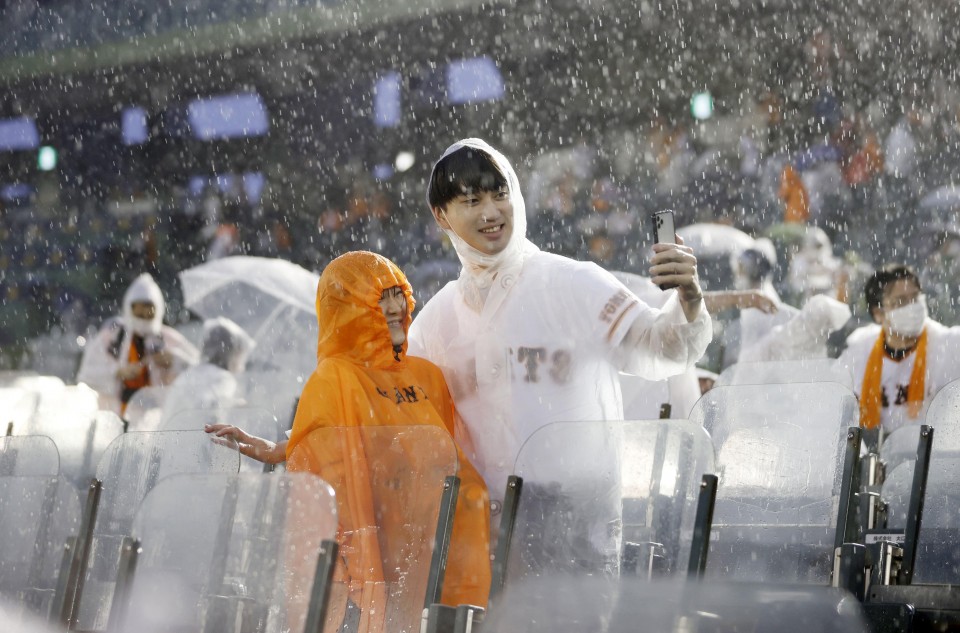 A couple who traveled from Tokyo to support the Yomiuri Giants take a photograph in the stand during the Giants' rained out game against the Yakult Swallows at Hotto Motto Field in Kobe. (Kyodo)

The move comes as coronavirus infections are on the rise again in Japan, with Tokyo reporting a daily record of 224 people infected the previous day, leaving many people cautious of a second wave of infections in the capital.

The nationwide tally now stands at over 20,700, excluding 712 from the Diamond Princess cruise ship, which was quarantined in Yokohama near Tokyo in February.

In welcoming fans back into stadiums, NPB and J-League teams will check the temperatures of spectators and require them to wear masks inside the stadiums. Clubs are also asking fans to refrain from traditional cheering practices thought to increase the risk of infection.

The number of spectators admitted to each game is currently limited to 5,000 people, with a plan to increase that amount to up to 50 percent of a venue's capacity on Aug. 1, depending on the status of infections across the country.

The decision will be left up to each club, however, with the Nippon Ham Fighters in NPB's Pacific League already declaring they will stay with the 5,000 limit for their game against the Orix Buffaloes on Aug. 1 at Sapporo Dome.

The 2020 NPB season began behind closed doors on June 19 after a three-month delay. The J-League first division resumed last week following a roughly four-month hiatus, after the J2 restarted and the J3 finally began on June 27.