American swimming superstar Katie Ledecky has been staying focused during the global coronavirus crisis and does not intend to let any minutes go to waste, as she says thinking about the Tokyo Olympics next year gives her "goosebumps."

"I hope and I pray that we have that opportunity because of the hard work that everyone has done," the five-time Olympic gold medalist told Kyodo News in a recent video interview, referring to her third Summer Games, which were originally set to open Friday in the Japanese capital before the pandemic swept the world.

Currently, the 23-year-old only steps out of her apartment when she trains at the Stanford University pool in California and has not competed since early March.

"I wish I was there (Tokyo) but I obviously understand the situation. I'm glad that we have next year to look forward to and prepare for," Ledecky said. "That's why I'm working so hard right now."

A 15-time freestyle swimming world champion, Ledecky said she was fortunate to be able to use a neighbor's backyard pool for three months until mid-June when training facilities across the United States closed due to the outbreak of the novel coronavirus.

While it was not a time to improve, it had allowed her to maintain her level of fitness and her feel for the water -- something she considers crucial in her bid for next summer. 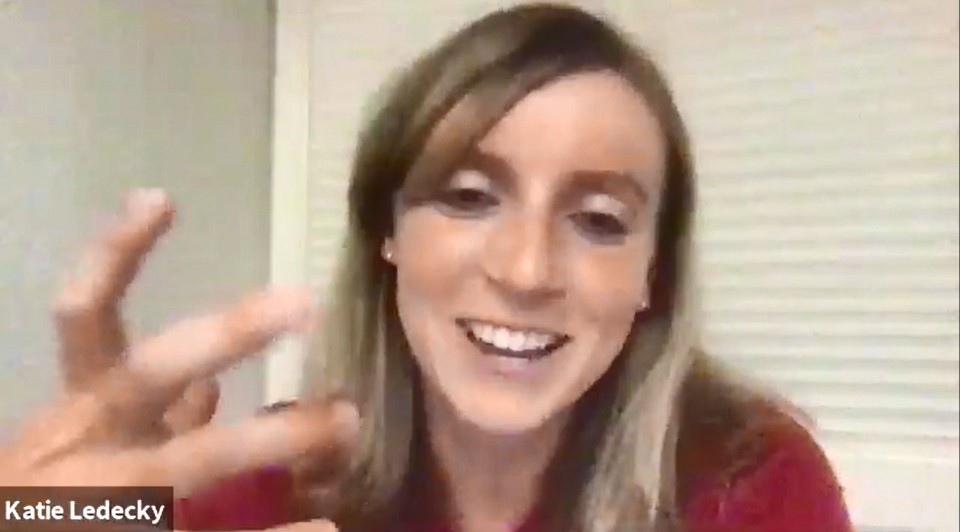 "Swimming is a very unique sport compared to a lot of other sports in that we need to be in the water and it's very hard to get back in swimming shape when you take an extended period off," she said. "It can take months to get back to where you were if you take even just a week off."

While her training had changed during one of the worst periods of the pandemic, she also understands the Tokyo Olympics will be different from what she experienced at the two previous games in Rio de Janeiro and London.

"I think we all understand that the Olympics next year might not look like a normal Olympics, and that there will be some changes. But really, nothing about our lives is normal right now," she said. "So I think we are all ready to adjust and be ready for anything that we need to do as athletes to make sure that the games are able to go on."

The Tokyo Games organizers and the International Olympic Committee have indicated that the next sporting extravaganza will be "simplified" to cut the extra costs and to protect the health of athletes, spectators and officials.

However, Ledecky said the thought of having the games next summer has been a source of hope as she tries to make a way around training and competition schedules altered by the spread of the virus.

"I just love the overall experience and to me that's been more impactful than any gold medal," she said.

At age 15, Ledecky won the 800-meter freestyle event at the 2012 London Games, shocking the crowd when she finished ahead of home favorite and defending champion Rebecca Adlington.

With her dominance on the international stage, she was anticipated to take the spotlight once again this year at the Tokyo Aquatics Center. With the addition of the 1,500-meter freestyle to the Olympic program, she had a chance to bring home five gold medals.

But the games were postponed in March following a rapid worldwide surge in cases of the COVID-19 respiratory illness caused by the virus.

Ledecky, who juggles between her swimming career and study at Stanford, said she was reassured given the uncertainty that the athletes were facing.

"I think my initial reaction was one of relief because I think the week or two weeks leading up to the announcement, we all were feeling a lot of stress and we were kind of anticipating the postponement," she said. 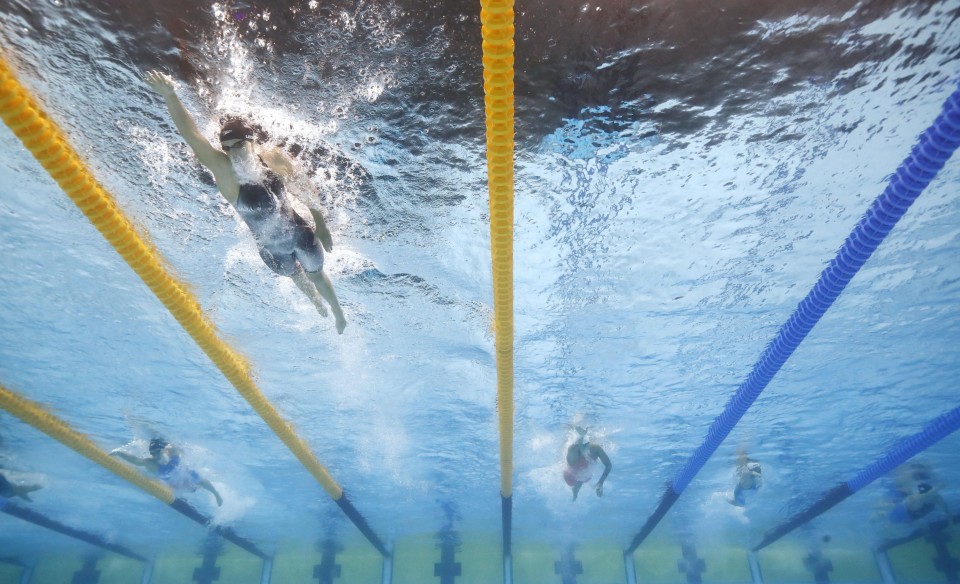 Katie Ledecky (front) of the United States competes in the women's 1500-meter freestyle at the world swimming championships in Budapest on July 25, 2017. (Kyodo)

"You could kind of see it coming and I was relieved that we didn't have to scramble to try to figure out how to train during this time."

While the postponed Tokyo Games marked one year to go on Thursday, it remains a question whether the Olympics and Paralympics can go ahead.

"I'll be sad. It's hard as an athlete to train very hard for something and have it be canceled," she said. "But at the same time, I understand the reality that we are all facing."

"I know it's a decision that isn't being taken lightly by anyone and I know that a lot of thought and a lot of minds will go in to that decision and I trust that the best decision will be made for our world, not just for us as athletes."

In any case, Ledecky is focused on the year ahead.

"I'm spending the extra one year trying to get faster, trying to be a better swimmer, be better next year than I would have been this year," she said.

Out of the pool, she has been taking online courses to complete her undergraduate degree in psychology this fall. She has also launched an education program in partnership with Panasonic Corp. earlier this year to encourage students to pursue careers in science, technology, engineering and mathematics.

"I just want to make this a productive year and hopefully continue to grow as an athlete and as a person. I don't want this year to go to waste."