An Okinawa taxi driver in his 80s was confirmed to be infected with the novel coronavirus, possibly by a passenger belonging to a U.S. Marine base where dozens of cases have been reported, the prefectural government said Thursday.

Among passengers of the taxi driven by the man living in the city of Okinawa was at least one person related to U.S. Marine Corps Camp Hansen, where 58 coronavirus cases have been reported, it said. 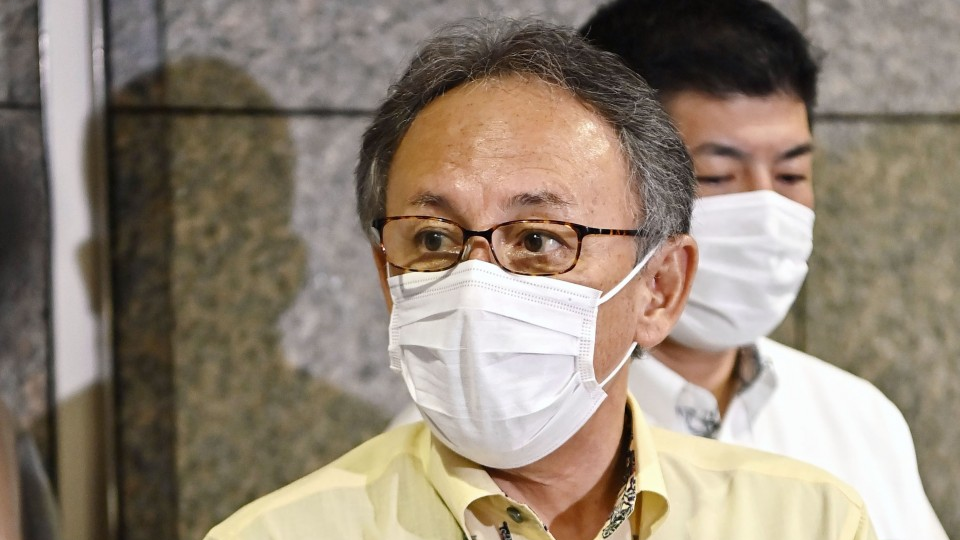 Okinawa Gov. Denny Tamaki speaks to reporters after holding talks with Japanese Defense Minister Taro Kono in Tokyo on July 15, 2020. The governor relayed local concerns over the spread of the novel coronavirus at U.S. military bases in the southern island prefecture. (Kyodo)

A prefectural government official said the taxi driver developed a fever on Tuesday and tested positive the following day. He visited the base at least once between July 4 and 8.

In addition to the base, 73 cases have been linked to U.S. Marine Corps Air Station Futenma, with another five confirmed at Kadena Air Base, and one each at Camp McTureous and Camp Kinser.

The total number of cases confirmed at U.S. military bases in Okinawa reached 138, according to the prefectural government.

Local concerns have been growing over the recent on-base mass outbreak of the coronavirus in Okinawa, with Gov. Denny Tamaki urging local residents who attended parties with U.S. military personnel in downtown areas and at beaches around July 4 to celebrate Independence Day to seek medical advice if they feel unwell.

The taxi driver's case is the first infection among local residents who had come into contact with on-base personnel this month.

The southern island prefecture, which hosts the bulk of U.S. military facilities in Japan, has so far reported 149 coronavirus cases including the taxi driver among the general population. The tally does not include the infections among U.S. military personnel.

On Thursday, Tamaki requested at a press conference that U.S. forces verify whether they have adequately implemented virus control measures such as a two-week quarantine.

The governor traveled to Tokyo on Wednesday to relay concerns over the on-base virus outbreaks, calling for the U.S. military to suspend transfers to Okinawa as soon as possible and conduct polymerase chain reaction tests on all incoming personnel.

U.S. military personnel who arrive in Japan on commercial flights have to take PCR tests. But those that fly directly to one of the bases in the country and are not showing symptoms of COVID-19 are not required to, according to a Foreign Ministry official.

Tamaki also called for a review of the Japan-U.S. Status of Forces Agreement, which exempts American troops from Japanese quarantine guidelines and allows them to sidestep an entry ban on foreign travelers from the United States and other countries beset by the pandemic.

Chief Cabinet Secretary Yoshihide Suga told a press conference on Thursday that the central government and U.S. forces are cooperating to prevent a further spread of the coronavirus.

Okinawa accounts for about 70 percent of the total acreage exclusively used by U.S. military facilities in Japan, despite the prefecture only representing 0.6 percent of the country's land.