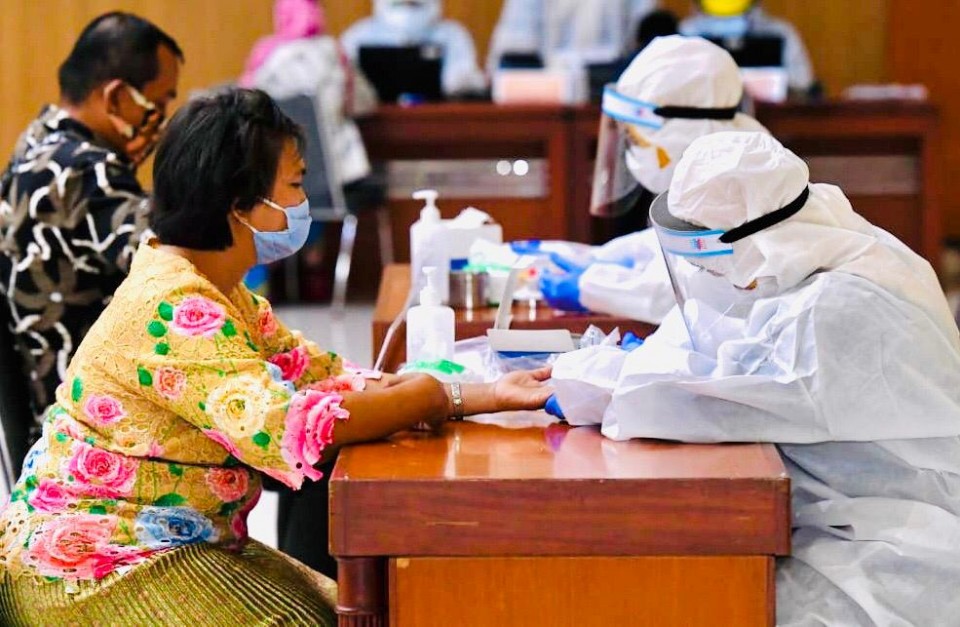 Medical workers carry out blood tests on people from small and medium-sized businesses before they meet Indonesian President Joko Widodo at the yard of the Merdeka (Freedom) Presidential Palace in Jakarta on July 12, 2020. (Photo courtesy of the Presidential Secretariat)

JAKARTA - Indonesian President Joko "Jokowi" Widodo said Monday that the new coronavirus outbreak in his country is expected to peak in August or September, three or four months later than earlier estimated.

"Taking a look at data, the peak is estimated in August or September, that's the latest estimate," Jokowi was quoted as saying in local media reports.

"But if we don't do something, the numbers can be different (and) therefore, I asked my ministers to work hard," he added.

The president had earlier predicted that the virus outbreak would peak by the end of May and flatten by this month. Based on that projection, the government relaxed its large-scale social restrictions.

A few weeks after the restrictions were eased, however, the numbers of confirmed coronavirus infections in the country have continued to rise without any sign of leveling off.

Last Thursday, the daily tally of new confirmed cases hit a record at 2,657.

On Monday, Indonesia reported 1,282 new confirmed cases of the coronavirus, bringing the total up to 76,981 infections with 3,656 fatalities.