Tokyo reported Saturday 206 new coronavirus infections, topping the 200 mark for the third straight day, an official said, accounting for more than half of the total of 383 new cases across Japan.

Although the single-day figure in the capital is down from the record of 243 set Friday, the figure exceeded 200 for three days in a row for the first time, fueling concerns over a second wave of infections.

Despite the alarming trend, Japan relaxed its guidelines Friday for holding large sporting and other events and the top government spokesman suggested the government will not ask people to stay at home again to curb the virus spread.

Tokyo's cumulative total reached 7,721, about a third of the 21,526 confirmed cases with 996 deaths in Japan as of Saturday, which excludes 712 from the Diamond Princess cruise ship that was quarantined in Yokohama near Tokyo in February.

Of the 206 infections in the capital, none of them have developed severe symptoms, while 101 were designated as having unknown infection routes, according to the metropolitan government.

By age group, 159 were in their 30s or younger, accounting for around 80 percent of the new infection total. As of Saturday, 529 people were hospitalized, including five with severe symptoms, according to the metropolitan government.

Forty-eight cases were related to nightlife establishments such as host clubs, and 59 people were infected through the workplace, family members or dining out among other routes, according to the Tokyo government. 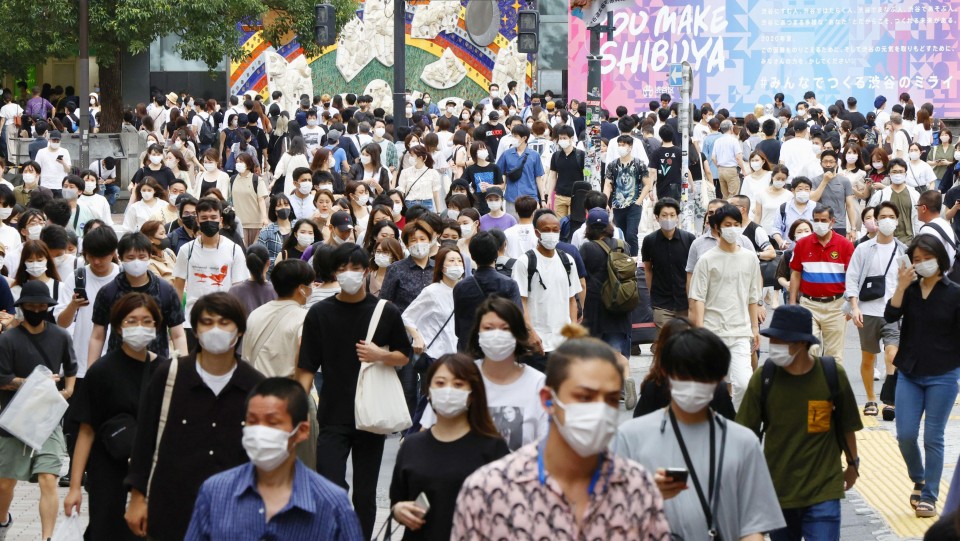 Chief Cabinet Secretary Yoshihide Suga said Saturday the recent spike in Tokyo's new infections is a result of the expansion of testing capacity.

"The government is aggressively tackling the issue by thoroughly conducting tests to identify those who are positive," Suga said at a lecture meeting in Hokkaido.

Yasutoshi Nishimura, minister in charge of economic revitalization, said at a press conference that the spread of infections in Tokyo is at a "level where people should be on alert."

The average daily figure of newly confirmed infections in Tokyo over the past seven days stood at 152.4.

Since the central government fully lifted a nationwide state of emergency on May 25, the number of infections has been on an upward trend in the capital, which has a population of around 14 million. Tokyo Gov. Yuriko Koike has requested residents to refrain from nonessential travel to other prefectures.

In the meantime, the number of new infections has also been on the rise in Tokyo's vicinity, with Kanagawa Prefecture on Saturday reporting 34 cases, the highest since the state of emergency was lifted, and Saitama Prefecture 35, following 44 on Friday, according to the local governments.

Saitama Gov. Motohiro Ono said Saturday he will request nightlife establishments which have not taken sufficient measures against the virus spread to shut business from Monday. Ono said the request is aimed at "ensuring that those businesses thoroughly implement necessary anti-virus measures."

Since late June in Saitama Prefecture, group infections have occurred at four nightlife establishments which serve customers in close-contact settings, with more than 50 infections confirmed among their employees and customers.

A total of 187 people were confirmed with the virus in a week through Thursday in the prefecture, with about 40 percent of them believed to have contracted it in Tokyo or nightlife establishments. People in their 40s or younger accounted for 80 percent of the infections, according to the Saitama government.

"It's not surprising that infections are increasing as trains become fully packed again. All we can do is self-restraint, for the sake of the economy as well," said a 28-year-old woman from Fujisawa, Kanagawa Prefecture, who came to Tokyo for work.

In Okinawa, two U.S. Marine Corps bases have been put on lockdown by the military with 61 coronavirus cases confirmed this week, the prefectural government said Saturday. The figure is not included in Japan's total coronavirus cases.

Also on Saturday, Kyodo News said one of its reporters in his 30s in Sendai, northeastern Japan, was found to have been infected with coronavirus. He is one of two infection cases the city government announced the same day.

The reporter began to feel fatigue from Wednesday and took a PCR test on Friday, with the result coming back positive the following day, according to the news agency.

He has been hospitalized with mild symptoms, while no one around him has claimed to have any health problems.