It is a year since Prime Minister Prayut Chan-o-cha returned to power in Thailand as a civilian leader, but his government already has its sights set on staying in power beyond the remaining three years of its term.

The first 12 months have presented many challenges for the Prayut regime, including anti-government protests and the coronavirus pandemic, which has sent the Southeast Asian economy into a tailspin.

The government claims it has launched numerous projects and packages to help people over the past year, while mega infrastructure schemes such as a high-speed rail link between the country's major airports are proceeding apace.

Some opinion polls show Thais are fairly satisfied with the performance of Prayut, the former junta leader, though they question the government's track record on transparency as well as checks and balances within parliament.

Yutthaporn Issarachai, a political science lecturer at Sukhothai Thammathirat Open University, says the government scores six out of 10 for its performance, citing a lack of progress in its promise to heal rifts in domestic politics.

Prayut had made this pledge when the military, led by the then army chief, staged a coup and seized power from a civilian government in 2014, after years of fractious political infighting.

In February, the Prayut government faced a near crisis after the Constitutional Court dissolved the country's second-largest opposition party and banned its 16 executives from participating in politics for 10 years.

Groups of students held rallies criticizing the Future Forward Party's dissolution as politically motivated, accusing the government of engaging in a conspiracy to crush the burgeoning opposition party.

Then the country was hit by coronavirus. Despite a clumsy initial response, the government guided the country away from the precipice after imposing a state of emergency in late March. 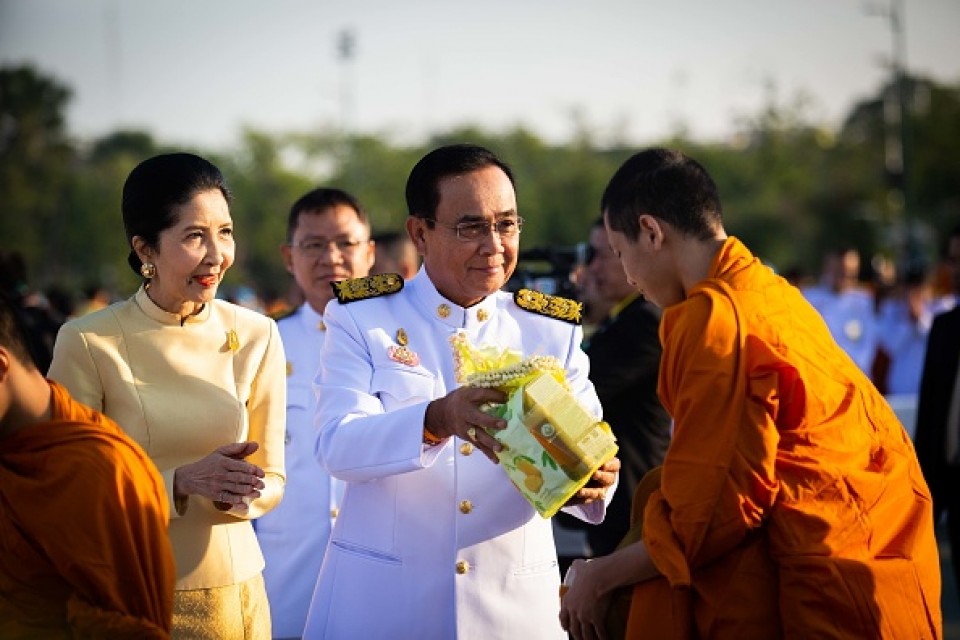 The decree was quickly followed by a nighttime curfew, along with the closure of schools and restaurants, to keep the spread of the virus in check.

The country, which reported a one-day high of 188 confirmed cases on March 22, gradually saw a decline in infections and fatalities over the following weeks.

Meanwhile, the government moved to draw up stimulus packages to prop up the economy, while financial assistance poured into businesses and to help people affected by the lockdowns.

Yutthaporn acknowledged the government's handling of the pandemic means it has likely done enough to ride out its four-year term, but that it is too far ahead to predict if it can secure a second stint in 2023.

Political and military sources agree with Yutthaporn's assessment, saying the government is confident of surviving the first term due to keeping the virus under control, and because parliamentary opposition is weak.

In a bid to ensure it retains power, the government has begun laying the ground for a second term, in particular last weekend's leadership change in the ruling Palang Pracharath Party.

Deputy Prime Minister Prawit Wongsuwon, a former army chief known in military circles as Prayut's big brother, became party leader at the expense of finance minister Uttama Savanayana. The leadership change is seen to signpost a Cabinet reshuffle, which is rumored to be coming in August or September.

Student-led anti-government protests are expected to continue but are unlikely to upend the political landscape, one of the sources said.

Parit Chiwarak, one of the student leaders who organized flashmob-style protests over the dissolution of the opposition party this year, said students will hold further demonstrations.

He accused the government of using "various mechanisms to cling onto power" while trampling on society's basic rights.

Some of the biggest unknowns include whether the government can weather the economic whiplash brought on by the impact of the pandemic, and if there could be a post-pandemic backlash over its handling of it.

Kalin Sarasin, chairman of the Thai Chamber of Commerce and the Board of Trade of Thailand, said the government's overall performance over the past year was moderate given the global economy has faced sluggish growth.

He lauded the regime for its handling of public health concerns during the COVID-19 pandemic, saying it did a good job of protecting people and helping relieve the impact on all sectors.

"I expect to see more efficiency and concrete measures in stimulating the economy, and a long-term plan for promoting the country's sustainable growth," Kalin said.

Kalin suggested the government should focus on making Thailand more competitive, narrowing the income gap, promoting tourism and trade, and continuing to expand trade on bilateral and multilateral tracks, among other areas.

Yet, Aat Pisanwanich, director of the International Trade Studies Center at the University of the Thai Chamber of Commerce, said the government has performed poorly on the economy.

"Many economic-related problems still need to be solved or improved, including the declining price of agricultural products, and declining trade competitiveness," he said, suggesting the government reshuffle its economic team to better tackle these.