Japan's coronavirus infections topped 30,000 on Saturday, with 295 new cases confirmed in Tokyo, as the country continues its fight against the pandemic amid a spike in infections in urban areas, authorities said.

With about 790 newly found infections, the nationwide tally for coronavirus cases rose to over 30,460, including some 700 cases from the Diamond Princess, the cruise ship quarantined in Yokohama in February. The figure has soared by 10,000 in a mere three weeks after surpassing 20,000 on July 4.

The death toll climbed to 1,009 across the country.

The figure is the second-highest single-day total for Tokyo, which logged a record 366 daily cases on Thursday.

Tokyo Gov. Yuriko Koike reiterated her call to residents to wear masks and take measures to prevent the virus from spreading.

She told reporters people in their 20s and 30s account for about 60 percent of total infections but cases are spreading as well among those in their 40s and 50s and also to the Tama district of western Tokyo from the central area.

It is the fifth straight day that the figure has exceeded 200. The latest report of infections brought the total number of infections in the capital to 10,975, after its cumulative coronavirus cases topped the 10,000 mark on Wednesday.

Tokyo has seen triple-digit single-day new infections on all but two days in July.

Koike has urged residents to avoid nonessential outings during the four-day holiday, having raised the pandemic alert to the highest of four levels, indicating "infections are spreading."

With the outbreak showing little sign of slowing in the capital, the Tokyo police on Friday night conducted on-site inspections at nightlife establishments in Tokyo's Kabukicho and Ikebukuro districts, where group infections have been traced.

After the police inspections, metropolitan government officials, who also joined, checked if the establishments complied with the proper anti-virus guidelines.

Other urban areas have also seen sharp rises in confirmed cases since a nationwide state of emergency was fully lifted in late May.

Among the newly confirmed cases, 91 people, or about 70 percent, were aged between 10 and 39, while 80, or about 60 percent, were infected via unknown routes, according to the Osaka government.

Osaka is faced with an imminent review of its plan to secure enough hospital beds as single-day infection figures surpassed a projected peak figure of 130, which serves as a basis for calculating the necessary number of beds, for the second straight day. 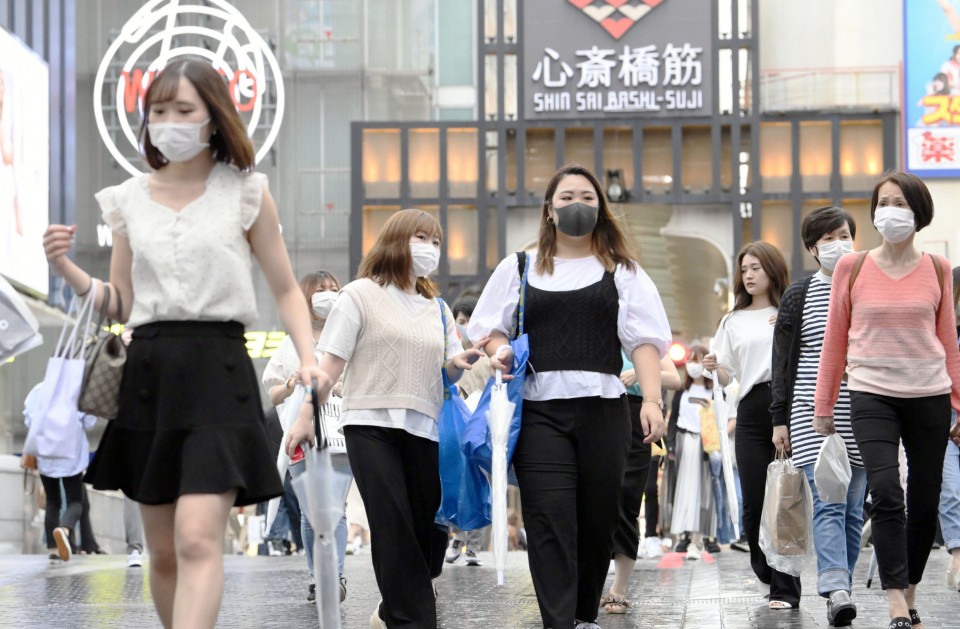 It has been issuing a yellow alert based on its own standards to assess the situation of coronavirus infections since July 12. If the occupancy rate of hospital beds for patients with severe symptoms reaches 70 percent or higher by Aug. 6, within 25 days from the first day of yellow alert, the alert will turn from yellow to red, indicating a state of emergency, according to the local government.

The prefectures of Aichi, central Japan, and Hyogo, western Japan, confirmed 78 and 24 cases, respectively, while the northeastern Japan prefecture of Akita found the first new infection case since April 14.

While acknowledging the growing number of infections, Prime Minister Shinzo Abe said Friday the current situation does not warrant a re-imposition of a state of emergency.