A Malaysian court convicted and sentenced former Prime Minister Najib Abdul Razak to up to 12 years in jail on multiple charges Tuesday in the first of a series of trials over a multi-billion dollar corruption scandal involving state investment fund 1Malaysia Development Berhad.

The verdict against Najib, 67, concerned the transfer of money totaling 42 million ringgit ($9.9 million) from a former 1MDB unit to his private bank accounts between December 2014 and February 2015, when he was prime minister.

His defense was that he was misled into thinking it was a donation from the Saudi royal family.

Najib was ousted from power in 2018 after the alleged plunder of some $4.5 billion from 1MDB came to light.

The Kuala Lumpur High Court convicted him of three counts of money laundering, three counts of criminal breach of trust and one count of abuse of power. He had pleaded not guilty to all seven counts. 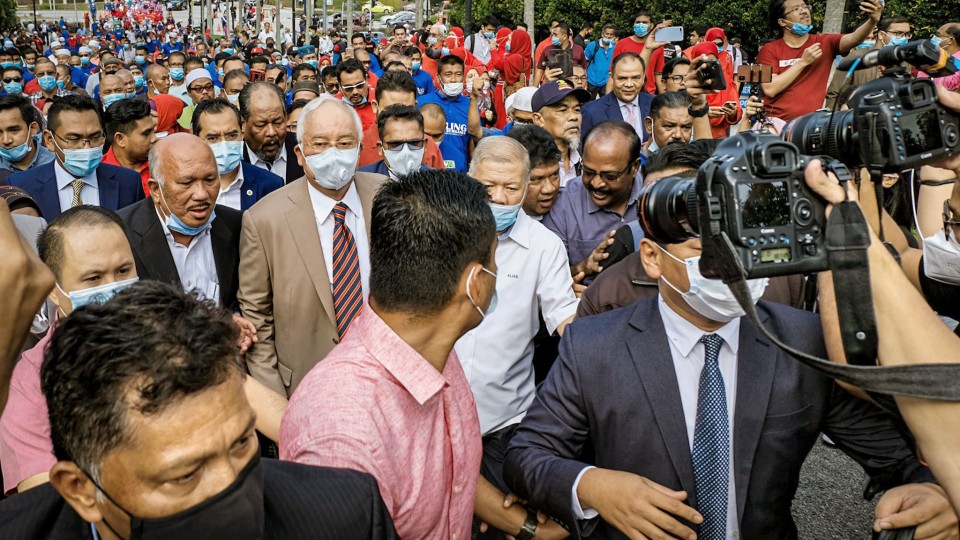 "I find that the prosecution has successfully proven its case beyond a reasonable doubt," Judge Mohamad Nazlan Mohamad Ghazali said. "I therefore find the accused guilty...on all seven charges."

All the sentences would run concurrently, meaning Najib would spend a maximum 12 years in jail plus five years if he could not cough up the 210 million ringgit fine.

The judge earlier had dismissed the donation defense as defying "logic and common sense," noting how "unusual" it would be for a foreign government to channel money into Najib's private account.

"It is very difficult to not characterize the Arab donation defense to be entirely self-serving," he said.

Najib, sitting inside the dock, appeared solemn but calm when the ruling was handed down.

Speaking from the dock during mitigation for a lighter sentence, he claimed he had brought economic prosperity to the country during his nine-year rule.

His sons and daughters were in court with him.

Outside court, hundreds of supporters were bussed in and when the verdict was delivered, chants of "Hidup Bossku" (Long Live My Boss), "Lepas Bossku" (Free My Boss) rang out. "Bossku" is a popular moniker adopted in Najib's rebranding campaign as a champion of the working class after his fall from grace.

The case concerning SRC International Sdn. Bhd., the former 1MDB unit, was the first of five trials Najib is facing.

He faces a total of 42 charges linked to 1MDB, which was created soon after he became prime minister in 2009.

Najib was arrested by Malaysia's anticorruption agency in July 2018, following a general election in May that year that led to his predecessor and one-time mentor Mahathir Mohamad returning to the premiership.

While in power, Najib had thwarted all probes into the state fund, firing the investigators and even his then-deputy Muhyiddin Yassin after he raised the issue publicly.

In a twist of fate, Muhyiddin, who joined forces with Mahathir to take on Najib in the 2018 poll, is now the premier after Mahathir resigned as political infighting and desertion caused the alliance that toppled Najib, to collapse.

Muhyiddin aligned himself with UMNO, where Najib still yields considerable influence, to form a new government in March.

Najib's conviction may bolster Muhyiddin's anticorruption credentials but it could come with a political cost as he faces losing crucial UMNO support.

Najib's lead counsel Shafee Abdullah told the court that the defense team will appeal against the ruling.

The conviction, however, will deny Najib the chance to run for office in the future.

The judge allowed the defense team's application for a stay of execution on the jail sentence as well as stay on payment of fine, while doubling the bail to 2 million ringgit.