Japan's first national museum dedicated to the indigenous Ainu people of northern Japan opened Sunday after repeated delays due to the coronavirus pandemic.

The National Ainu Museum in the Hokkaido town of Shiraoi will only accept 2,000 visitors who made reservations in advance on weekdays and 2,500 on weekend days to keep crowding to a minimum and reduce the risk of coronavirus transmission.

The 8,600-square-meter museum, a park and a memorial make up the complex named "Upopoy," which means "singing in a large group" in the Ainu language.

The ethnic group has lived for centuries in areas that became northern Japan, notably on the country's northernmost main island of Hokkaido, as well as on neighboring Sakhalin in what is now Russia.

Beginning with the government's assimilationist policy in the Meiji Era (1868-1912), the ethnic minority suffered discrimination and land dispossession, spilling over into ongoing income and educational disparities.

The Ainu also struggled to maintain their culture due to Japan's assimilationist efforts and were prohibited from speaking their native language. 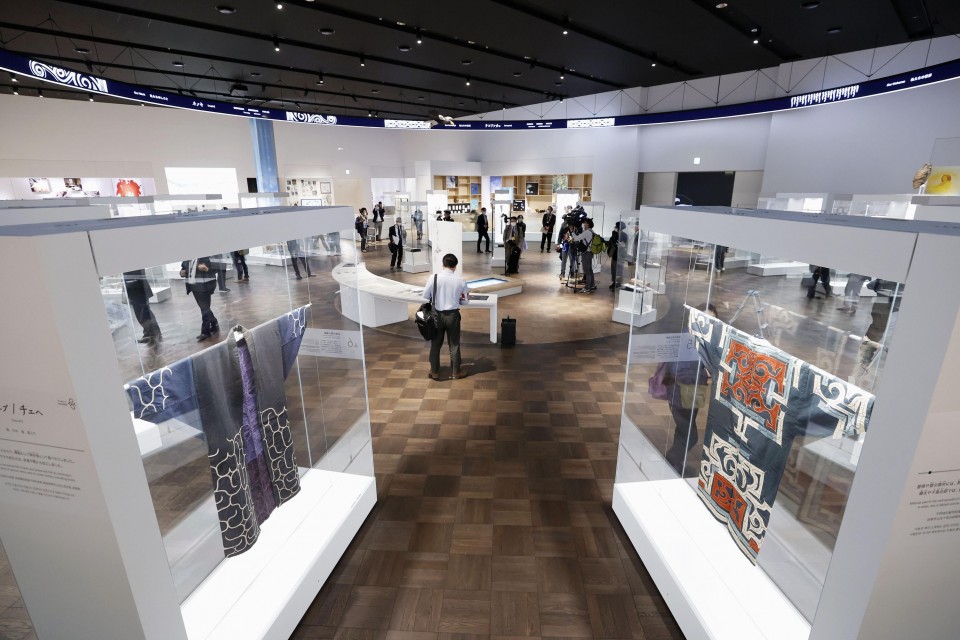 Photo taken in Shiraoi on the northernmost Japanese main island of Hokkaido on June 9, 2020, shows artifacts on display at the National Ainu Museum, dedicated to the Ainu ethnic minority in northern Japan. The facility offered a preview the same day to town officials and town assembly members ahead of its yet-to-be-decided public opening, which was originally scheduled for April but cancelled due to the coronavirus pandemic. (Kyodo)

The Japanese government only recognized the group as "indigenous people that have their own language, religious and cultural identity" in 2008.

The museum complex, originally scheduled to open on April 24, aims to attract one million visitors annually once the admission limits are lifted, according to the Japanese government. It is expected to contribute to the promotion of the local economy and tourism.

The park has a hall to show traditional Ainu dance and musical performances, a workshop for cooking Ainu cuisine and playing Ainu instruments, and a studio for Ainu craft demonstrations. It also has an area showing a traditional Ainu village.

The memorial site has buildings for performing memorial services and keeping displaced remains of deceased Ainu people, along with a monument and a cemetery.