Months after the 1945 U.S. atomic bombing of the Japanese city of Nagasaki, a teenager whose back had been stripped of skin by the blast was filmed by an American soldier -- a scene that came to be one of the most widely recognized reminders of the horrors of the nuclear attack.

The boy, grimacing in pain, was Sumiteru Taniguchi. He survived, and eventually put himself in the forefront of Japan's antinuclear campaign, often baring the scars engraved in his flesh, until he died at the age of 88 in 2017.

Commemorating the 75th anniversary of the atomic bombing of Nagasaki on Aug. 9, which followed the one on Hiroshima three days earlier, Taniguchi's detailed account of his life will become available to an English-speaking audience through a book to hit shelves in the United States next month. 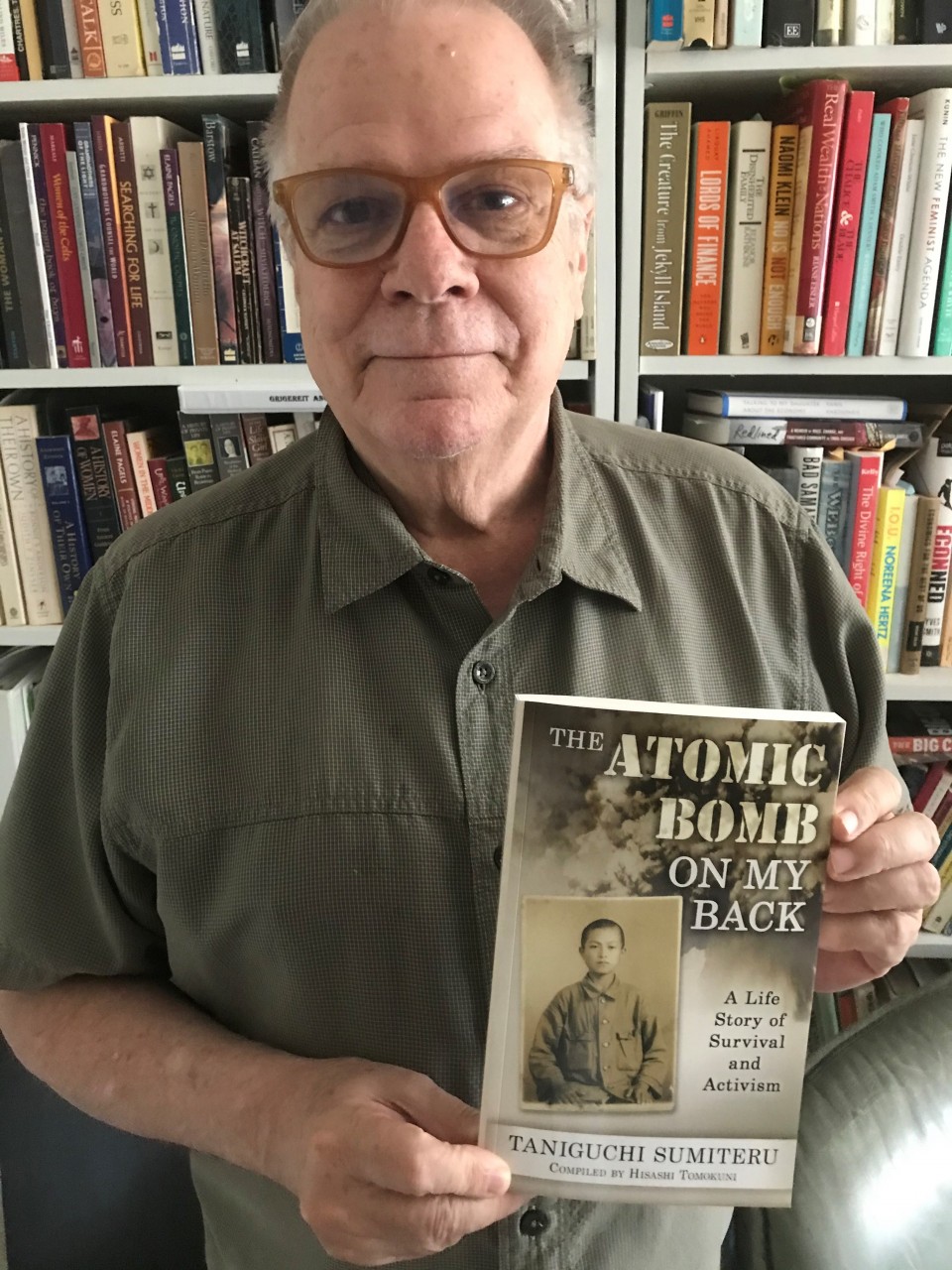 Stephen McArthur, co-founder of Rootstock Publishing, holds the translated memoir of atomic bomb survivor Sumiteru Taniguchi, which will hit the shelves in the United States in August 2020. (Photo courtesy of Stephen McArthur)(Kyodo)

"The Atomic Bomb on My Back," to be put out by Rootstock Publishing, an imprint of Multicultural Media Inc., is a translation of a 2014 memoir by Taniguchi as told to local newspaper reporter Tomokuni Hisashi.

Japanese and U.S. peace activists spent a total of five years translating the text and finding a U.S. publisher, hoping that it would bring renewed attention to the inhumane consequences of the use of atomic bombs in the United States, where many believe the attacks on Japan were a justified means of ending World War II.

"We hope readers in the United States, particularly the younger generation, will relate to this personal life story of an ordinary 16-year-old boy working as a postman, who survived the atomic bombing," said Rieko Asato, who led the translation team and is a member of a Japanese antinuclear group.

Stephen McArthur, a co-founder of Rootstock based in the eastern U.S. state of Vermont, called it an "important" book as he believes the American people are still in the middle of "learning a lot about our history."

"This (dropping of the atomic bombs) is just another issue that we're going to really eventually learn about, and look back and say 'Look, we probably could have accomplished the end of the war in a different way without killing hundreds of thousands, and having so many hundreds of thousands suffer for years and decades,'" he said.

The atomic bombs that exploded over Hiroshima and Nagasaki killed an estimated 140,000 and 74,000 people, respectively, by the end of 1945. Japan surrendered six days after the bombing of Nagasaki, bringing an end to World War II.

Taniguchi was delivering mail in Nagasaki when the atomic bomb exploded 1.8 kilometers away. He spent one year and nine months lying on his stomach due to the burns on his back, which created bedsores that made the flesh on his left chest rot away.

Even after he was discharged from the hospital in 1949, Taniguchi never found relief from the pain in his back. His disfigured chest also caused pain when he breathed deeply as the left side of his ribs continually pressed against his lungs. He underwent dozens of surgeries to remove lumps that grew out of his back.

Like many other survivors, he struggled with social stigma and discrimination, being rejected as a marriage partner several times. He married his wife Eiko 10 days after first meeting her, but he recalled how anxious he was to show his horrifyingly scarred back during their honeymoon, thinking that she would leave him.

Taniguchi was part of Japan's fledgling antinuclear movement from the time it emerged in the 1950s, but it was only after the "reddened back" photo was made public in 1970 that he was "pushed onto center stage" in the book's words, and had more opportunities to share his experience in meetings and rallies.

The photo was taken from a 16-millimeter color movie film discovered at the U.S. National Archives. The vivid image of the boy with raw, blood-red tissue exposed on his back shocked many people who until then, according to Taniguchi, had only seen the impact of the bombs in black and white footage.

"I felt uncomfortable speaking before an audience, and I had difficulty projecting my voice due to my injuries. But I came to realize that now that a photo of my injury was publicly viewable, I could not refuse," Taniguchi recalled, adding, "I gradually made up my mind to be at the forefront." 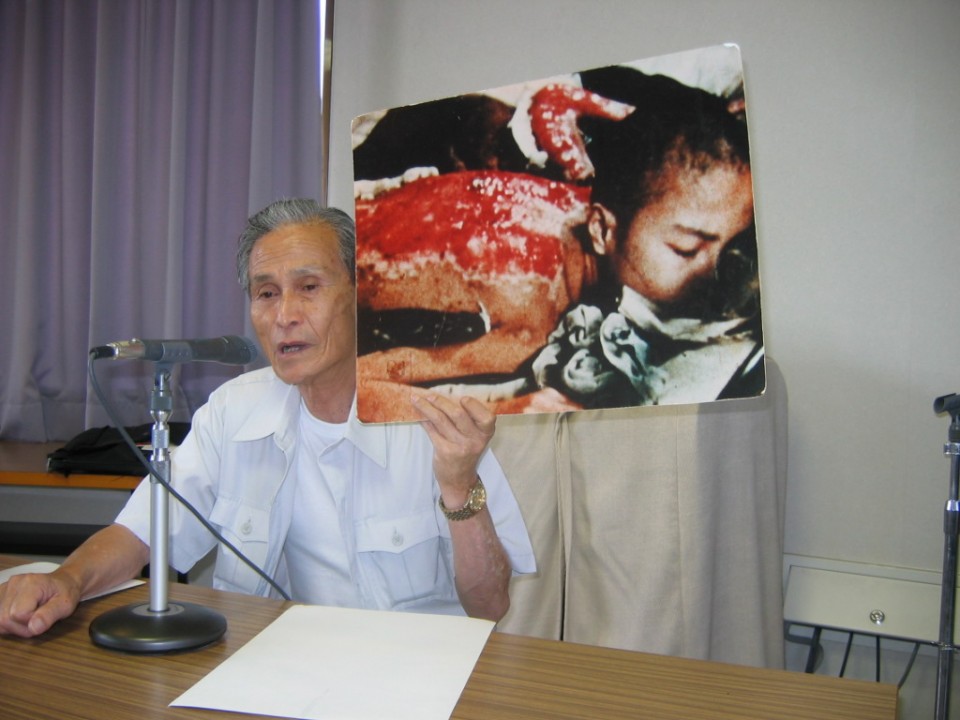 While he traveled overseas many times to recount his story, the book also showed his frustration at the challenge of getting his message across in the United States, which together with Russia owns over 90 percent of global nuclear warheads.

"I wonder why it's so difficult for them to understand how we feel," he said in the book, noting that he wanted people to know that atomic bomb survivors have "overcome resentment" against the United States to work toward the goal of never creating another "hibakusha," or sufferers like them.

The 200-page book ends with Taniguchi's plea to the readers that they visit Nagasaki or Hiroshima to listen to sufferers' stories, imagine someone special to them turning into ashes, and take action to ensure that Nagasaki is the last place on earth ever attacked with a nuclear weapon.

Peter Kuznick, a history professor of American University who wrote an introduction for the English book, said in an interview that Taniguchi's testimony was more than just "very moving."

"What made it so much more compelling than other hibakusha testimony was really the photos, and then when he would show the scars," said Kuznick, who had taken his students to hear Taniguchi speak for years as part of his study tour to Japan on nuclear issues.

Taniguchi would hold up a large color photo of his red back, which itself was more than most of the students could bear to see, and then remove his shirt, revealing a heart that could be seen beating through his ribs and a back covered with scars.

"He didn't want to sanitize it in any way. He wanted people to really see what these kinds of weapons do to human beings," the professor said.

Baring his scars in this way was not easy for Taniguchi, he said.

"That took a lot for him because it took a decade before he could take his shirt off in public. So he did everything he could to hide out of embarrassment, or afraid that people would either be horrified by what they saw, or else they would pity him. That's not the response he wanted," he said. "He was a very proud man." 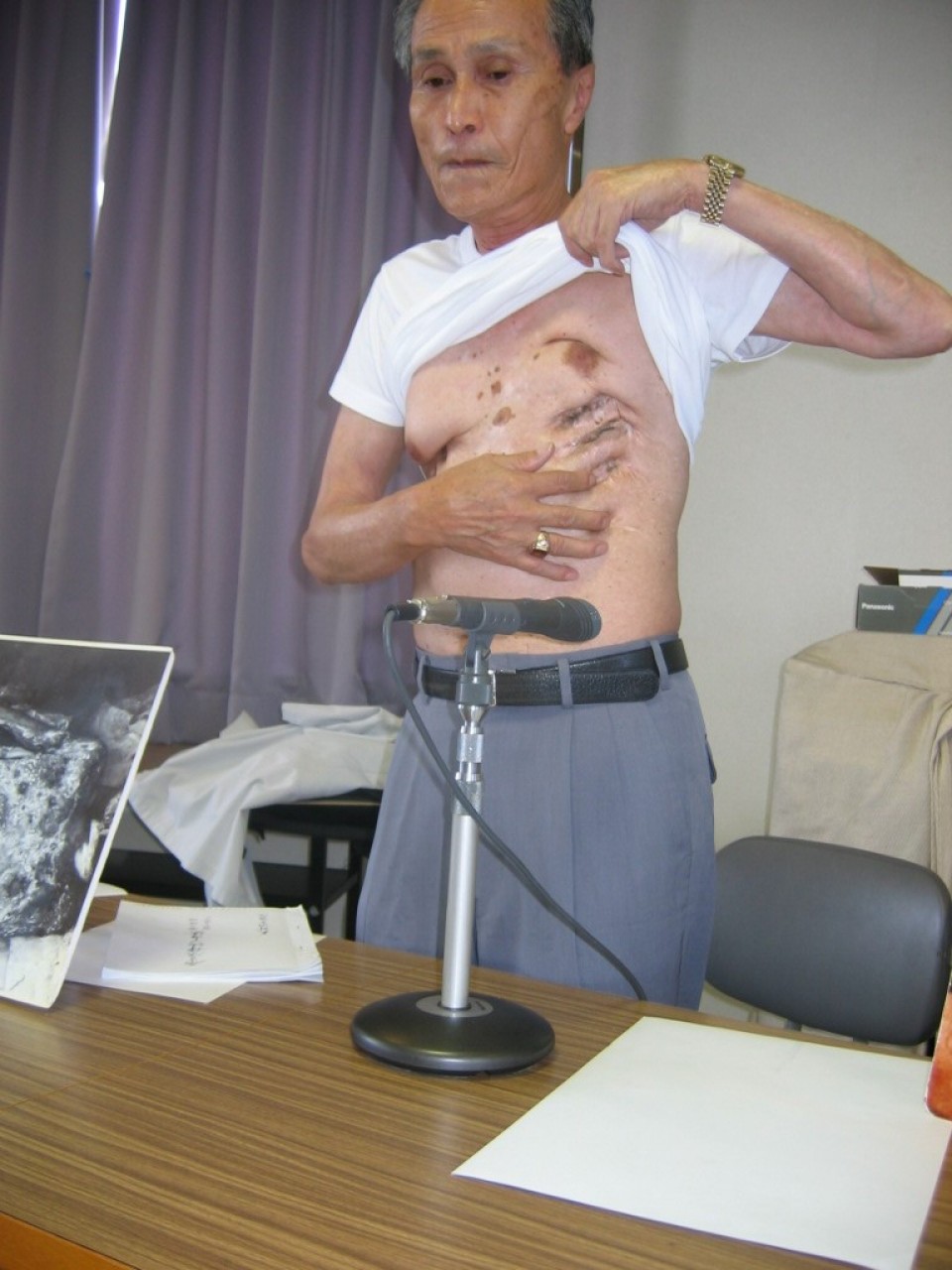 Kuznick said Taniguchi's testimony, and the way he overcame his terrible experiences to become a leader in the antinuclear movement, gave "a certain kind of courage" to his students that helped them to "push beyond their limits and also act in a way that was meaningful."

Both Kuznick and Asato said they believe that now may be a good time to raise awareness of the impact of nuclear weapons in the United States as more question the country's policies and systems amid the coronavirus pandemic and anti-racism protests triggered by the death of a black man in police custody in May in Minnesota.

"I think in this political climate people are open to different ideas," Kuznick said.

The U.S. presidential election in November may also offer a chance to reconsider policy on nuclear weapons if Republican President Donald Trump, whose administration has pushed to expand the nuclear arsenal, is defeated by presumptive Democratic presidential nominee Joe Biden, Asato said.

"The end of the Trump administration may create a momentum toward building a society that is not the same as before," she added.

A crowdfunding project is under way until the end of July to finance part of the $8,000 costs for printing, distribution and shipment of the first 500 copies of the book. The website can be found at https://motion-gallery.net/projects/Taniguchi-Book.

Rootstock is planning to pitch the book to other publishers in Europe and elsewhere in the hope that it will be translated from English into other languages, according to McArthur.