Japan and Australia expressed "grave concern" Thursday about China's imposition of a national security law on Hong Kong, saying the region's autonomy has been eroded.

During their first virtual summit, Japanese Prime Minister Shinzo Abe and Australian Prime Minister Scott Morrison agreed that the two nations will step up preparations to resume limited travel among business people, with Tokyo enforcing an entry ban on 129 countries and regions amid the global coronavirus pandemic.

"The leaders shared grave concern about the imposition of a national security law in Hong Kong, as it eroded Hong Kong's autonomy under the 'One Country Two Systems' framework," a statement issued after the talks said.

The legislation outlaws acts of secession, subversion, terrorism and collusion with foreign forces. It also allows suspects to be transferred to mainland China for prosecution. Hong Kong was promised a high degree of autonomy for 50 years after its 1997 to China from British rule. 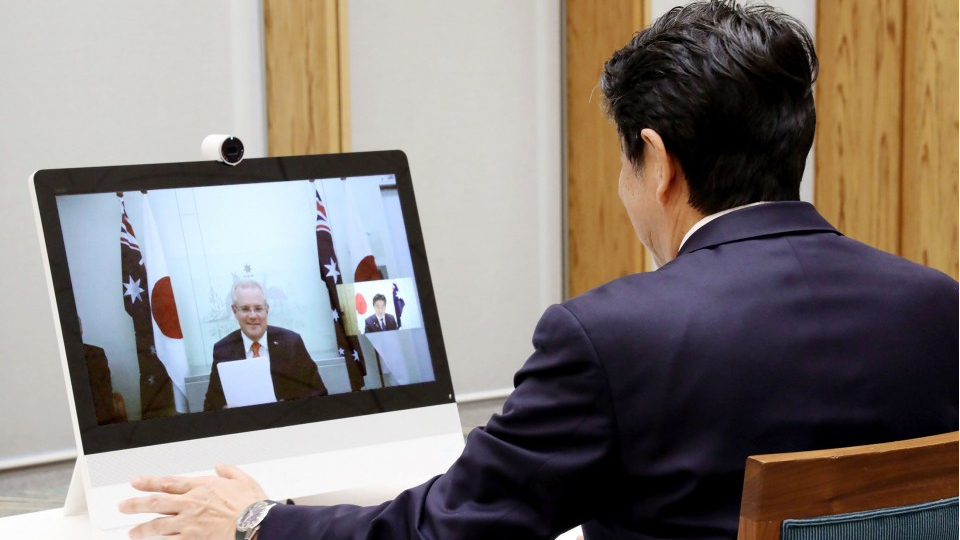 Japan views Australia as a "quasi ally" in the Asia-Pacific region, where China's growing clout is raising regional concern.

Abe and Morrison said they strongly oppose any unilateral and coercive actions seeking to change the status quo in the East and South China seas without naming China.

Tokyo and Canberra have been strengthening economic and defense cooperation in recent years. The two leaders recognized the importance of continued talks to reach a bilateral agreement being negotiated that will facilitate joint military exercises and other activities of their defense forces in each other's country.

The virtual summit came amid growing tension between Australia and China, following Canberra's calls in April for an independent international probe into the origin and spread of the novel coronavirus. The virus was first detected in China's Wuhan last December.

Abe and Morrison agreed on the need for an "impartial, independent and comprehensive" evaluation of the response by the World Health Organization to COVID-19, the respiratory disease caused by the virus.

They also said it is important for Taiwan to participate in the WHO's general assembly as an observer, though Beijing opposes its inclusion as a violation of its "one-China" policy.

As the novel coronavirus spread globally, it disrupted not only travel but also supply chains, exposing the vulnerability of an intertwined world.

Japan has resumed limited travel with Vietnam and is hoping to do the same with Australia and other countries that have seen the infection situation stabilize.

Economic security has emerged as a key cooperation area. The two leaders said the two nations need to have "secure and reliable" supply chains of critical goods and services and strengthen cooperation on cybersecurity and critical technology such as 5G.