The Japan Sumo Association had some harsh words on Saturday for 26-year-old wrestler Abi for eating out with backers in violation of guidelines meant to prevent the spread of the novel coronavirus.

Abi, who wrestles in the elite makuuchi division as a No. 5 maegashira, was withdrawn from competition at the July Grand Sumo Tournament earlier in the day and is slated to have a polymerase chain reaction test on Sunday to determine whether he has been infected. 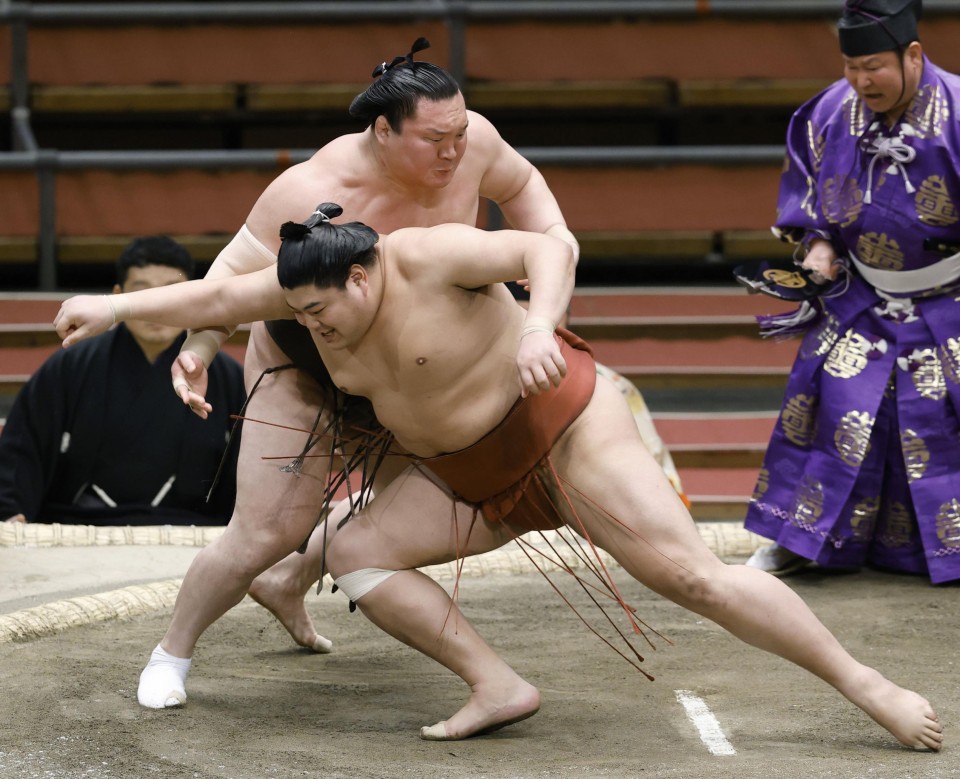 Grand champion Hakuho (top) defeats Abi on the eighth day of the Spring Grand Sumo Tournament at an empty Edion Arena Osaka on March 15, 2020. The tournament has been held behind closed doors due to the coronavirus outbreak. (Kyodo)

"Every member of the association is pulling together," said JSA chairman Hakkaku, referring to the extraordinary measures taken to be able to hold a tournament at all.

"For someone to go wandering about at a time like this is unpardonable."

Wrestlers have been ordered to refrain from going out during the tournament, which was shifted from its traditional Nagoya location to Tokyo to reduce the added risk of infection that comes with travel.

The association is allowing up to 2,500 spectators per day at Tokyo's Ryogoku Kokugikan in accordance with government guidelines, but it held its March tourney in Osaka behind closed doors and canceled the May tournament.

Multiple sources within the association have said that low-ranked wrestlers from other stables also attended the same dinner with Abi.

"He has admitted that he was out with people from outside the association," sumo elder Shibatayama, the JSA's director of communications said.

"We cannot permit him to be in contact with other top wrestlers. It is a violation of the guidelines. People need to consider the kind of circumstances society is currently facing."