The number of coronavirus cases has topped 2 million in Brazil, meaning about one in 100 people have now been infected there, its health ministry said Thursday.

The overwhelming pace of the spread of the virus -- with 20,000 to 40,000 new cases per day recently -- is showing little sign of slowing after total infections topped 1.5 million on July 3. 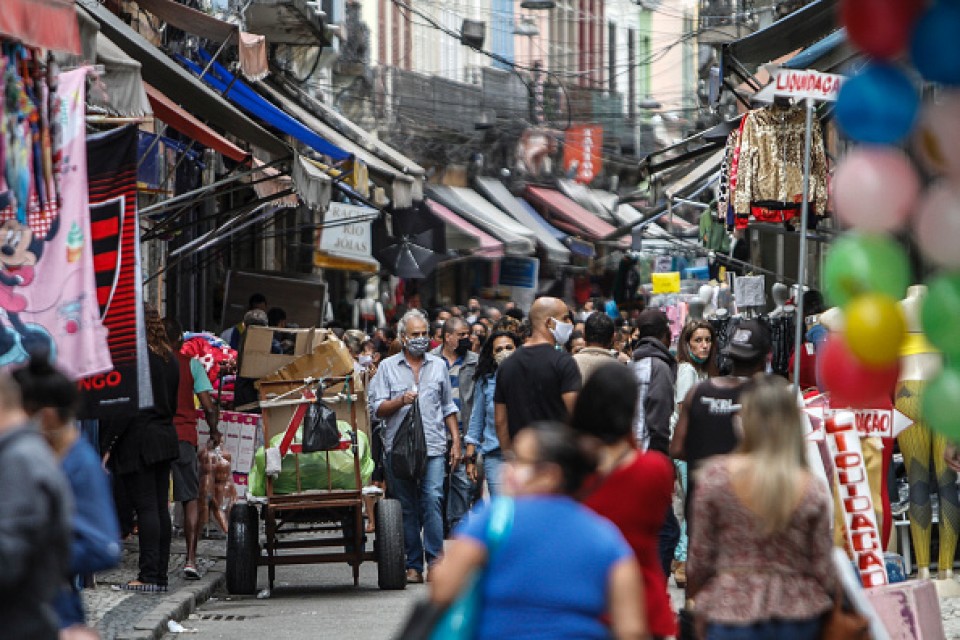 People wearing face masks walk by the Saara region, a large shopping area in the center of the city amidst the coronavirus pandemic on July 16, 2020 in Rio de Janeiro, Brazil.(Getty/Kyodo)

No. of Tokyo COVID-19 cases to be on par with Thurs' record

The total number of infections in Brazil, which stood at 2,012,151 on Thursday out of a population of around 211 million, is the second highest in the world after the United States, which has recorded over 3.5 million cases.

Brazil's coronavirus death toll is 76,688, again the second highest after the United States, which has seen some 138,000 fatalities.

According to a tally by Johns Hopkins University in the United States, the total number of confirmed infections worldwide is more than 13.7 million, with over 589,000 deaths.

The Brazilian health ministry says over 60 percent of people infected have recovered. Yet public anger appears to be growing over President Jair Bolsonaro's handling of the outbreak.

Bolsonaro, who has been in quarantine after testing positive for coronavirus last week, has downplayed the severity of the pandemic and criticized local governors for imposing restrictions on social and economic activities to stem the spread of the virus.

The highest number of infections and deaths in Brazil has been recorded in the largest city, Sao Paulo, followed by Rio de Janeiro. The country's first confirmed infection was reported on Feb. 26, and the virus is now spreading inland and to poorer regions.

The World Health Organization has warned the pandemic is hitting the Americas the hardest.

Health experts have pointed out the virus is rapidly spreading in Latin America, helped by a precarious healthcare infrastructure and large income inequality, among other factors.

India ranks third in the number of confirmed coronavirus infections, at over 1 million, followed by Russia with over 750,000 cases, according to the U.S. university's data.