Terunofuji took a big step toward his first championship in over five years with a win Friday against ozeki Asanoyama that gave him the outright lead at the July Grand Sumo Tournament.

In the final bout of Day 13, Terunofuji, who is returning to the top division as a No. 17 maegashira, avoided being tipped over at the straw after joint overnight leader Asanoyama (11-2) had the early momentum at Tokyo's Ryogoku Kokugikan.

The rank-and-filer was able to regain his feet and levered the new ozeki out, flinging him from the raised ring to win their first career meeting at the 15-day event. 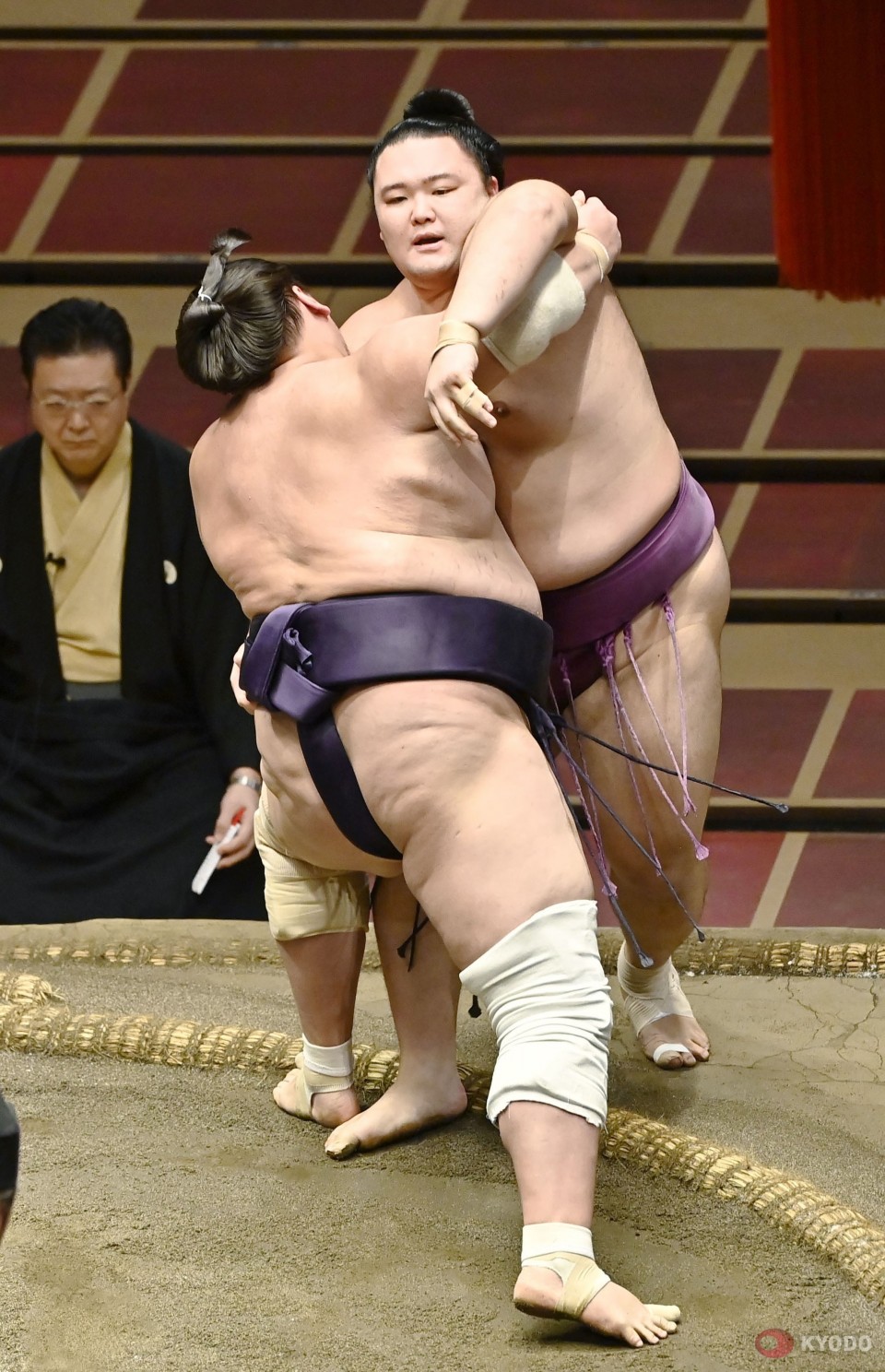 "I tried to get the first belt hold and came out to be the attacker from the start. I think that was the key," Terunofuji said.

The 28-year-old Mongolian former ozeki, whose ranking plummeted due to injuries and surgeries on both knees, last fought in sumo's top flight in January 2018. On Saturday, he will take on sekiwake Shodai (10-3), against whom he trails 5-4 in head-to-head competition.

"I've been doing my best. I came in here confident because of the work I've put in," said Terunofuji.

Sekiwake Mitakeumi also improved to 10-3 with a victory over No. 4 Kagayaki (4-9) to maintain a slim hope of winning his third career championship.

Shodai's win came by default after his opponent, yokozuna Hakuho, announced his withdrawal from the tournament due to injury earlier in the day.

No. 11 maegashira Tochinoshin (8-5) forced out No. 15 Chiyomaru (3-10) in the first makuuchi division match of the day. With his eighth win, the Georgian former ozeki posted a winning record for the first time in over a year.

Another former ozeki, No. 13 Takayasu (8-5) also notched his first winning record since he won eight last July in Nagoya.

Kotoshoho (8-5), who is making his makuuchi-division debut in the month before his 21st birthday, also earned his eighth win. The young No. 15 maegashira withstood the charge of No. 8 Chiyotairyu (5-8), rocking him back and off balance before slapping him down.

"The past three days, I discovered so many things I need to fix. I have to remind myself to focus only on the match ahead of me and not think too far ahead," Kotoshoho said. "First and foremost, I want to focus on the initial charge. Today, my body reacted well and that made the difference."

In other bouts, komusubi Okinoumi (8-5) secured his winning record by pushing down No. 6 Enho (5-8), who suffered his second straight loss. Komusubi Daieisho (9-4) also won, thrusting down No. 4 Aoiyama (5-8) to his eighth defeat.