The number of new coronavirus infections reported in Tokyo on Thursday hit a single-day record of 224, the metropolitan government said, with the sudden jump in cases stoking fears of a second wave.

But the central government denied it would immediately declare a state of emergency again, after lifting the previous one in late May, underscoring that Japan's medical system is well prepared. 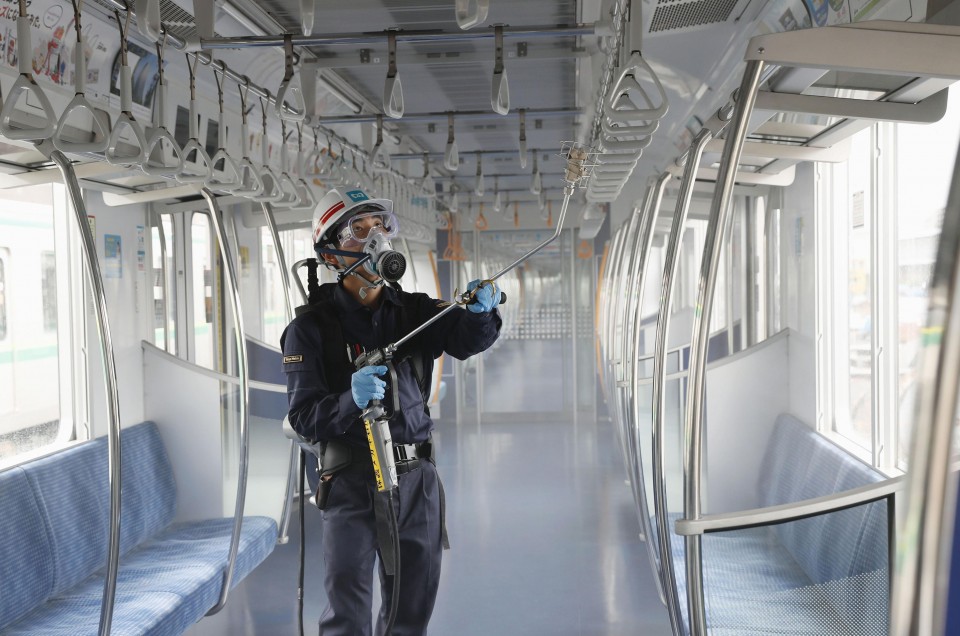 A worker sprays anti-virus liquid on a Tokyo Metro train car on July 9, 2020, in the Japanese capital amid the spread of the novel coronavirus. (Kyodo)

The latest figure follows Wednesday's announcement of 75 cases in the capital, dropping to double digits for the first time in seven days.

"The number of serious cases has fallen dramatically since April, and the medical system is not under strain. We will monitor the situation with a high level of alertness," Prime Minister Shinzo Abe told reporters.

Chief Cabinet Secretary Yoshihide Suga said the central government is not considering declaring another state of emergency at the moment.

The top government spokesman also said it would relax the rule for audience sizes at events starting Friday as planned, with the maximum allowable raised to 5,000.

Tokyo has been striving to stem a rebound in infections since a nationwide state of emergency was lifted in late May. The pace of increase in virus infections in Japan had slowed after new cases in the capital peaked at the previous high of 206 reported on April 17.

The number of confirmed cases related to nightlife establishments has risen recently, particularly in Ikebukuro, a major commercial and entertainment district in Tokyo, and the Kabukicho area in the Shinjuku district, according to officials. 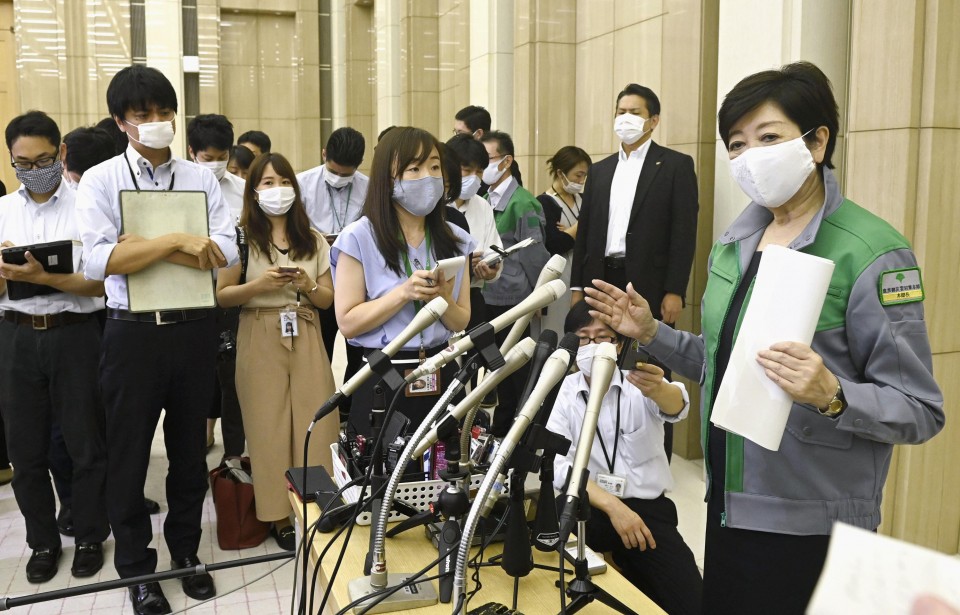 Tokyo Gov. Yuriko Koike meets the press in Tokyo on July 9, 2020, after attending a meeting of the metropolitan government's anti-coronavirus task force. Tokyo reported over 200 infections the same day. (Kyodo)

Tokyo Gov. Yuriko Koike said at a task force meeting that the rising number of reported infections was a result of increased testing, but added, "We need to be vigilant about trends in the number of infections."

The figure reported Thursday was obtained after conducting around 3,400 tests, according to the metropolitan government. Tokyo is aiming to increase its daily testing to 10,000 and secure around 2,800 beds to treat coronavirus patients.

As for transmission routes, Koike said infections were reported among young people attending parties or having dinner with friends, in addition to those infected at nightlife establishments.

But almost half of the new cases had untraceable transmission routes, although none had severe symptoms.

The metropolitan government has four alert levels for infection conditions as well as health delivery in the capital of about 14 million people.

On Tuesday, Koike said the metropolitan government plans to extend financial assistance to nightclubs and other facilities in Ikebukuro if they suspend operations at the request of authorities due to group infections.

Koike has also requested residents to refrain from nonessential travel to other prefectures amid growing concern over a second wave of infections.

At over 7,000 cases, Tokyo makes up around a third of the total number of confirmed cases in the country.

The surrounding prefectures of Saitama, Chiba and Kanagawa have also increased their vigilance, as cases have been rising in line with Tokyo.

Saitama on Wednesday reported 48 new infections, the highest for the prefecture since the state of emergency was lifted. Chiba also confirmed a post-emergency peak of 22 new cases on Thursday.

New daily infections across the country came to 355, the highest since the state of emergency was lifted.

The national tally now stands at 20,712, excluding 712 from the Diamond Princess cruise ship that was quarantined near Tokyo in February, according to a Kyodo News tally of figures reported by local governments. The death toll stands at 995.