Farmers in southern Thailand have cried foul over an animal protection organization's accusation that monkeys used to harvest coconuts are abused, insisting they are just following tradition by utilizing their climbing skills and treat them as family members, not "slaves."

The allegations leveled by the People for the Ethical Treatment of Animals, or PETA, have caused some supermarkets in Britain to stop selling Thai coconut products since early this month. 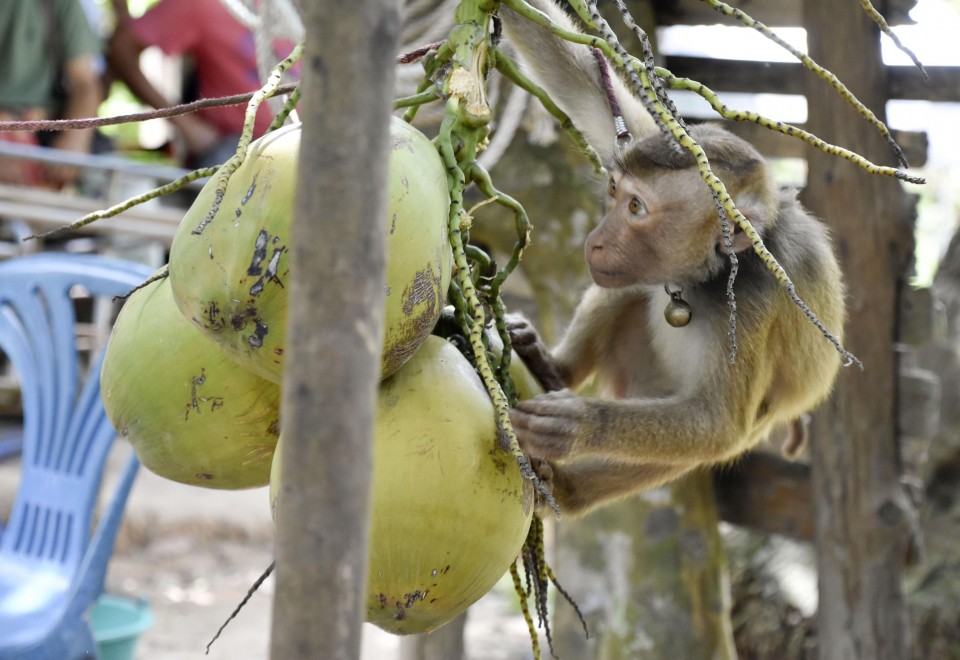 A monkey is trained to harvest coconuts in Chumphon, Thailand, on July 11, 2020. A U.S. animal protection organization has leveled an accusation that monkeys Thai farmers use to harvest coconuts are abused, causing supermarkets in Britain to stop selling Thai coconut products. (Kyodo)

About 30 coconut farmers who use captive macaque monkeys gathered at a house in Lang Suan District, Chumphon Province, some 500 kilometers south of Bangkok, to discuss the falling local price of coconut milk due to the overseas boycott.

One of them, 66-year-old Somboon Tuengsiebyuan, said that in the wake of the PETA allegations, which received wide play in the British press, the price of coconuts has dropped from 13-14 baht (41 to 44 U.S. cents) each early this year to only 10 baht now.

He said the allegations are untrue and unfair to typical macaque owners like himself, though there may be some unscrupulous operators in the coconut farming industry that give them a bad name.

"I've grown up with macaques...We consider them a part of our family. Since we grow coconuts, we have to use them to help us. Everyone knows that a man cannot climb up a tree as good as a monkey."

"We live with them. We feed them food as we eat. They work for us and we take care of them. We never torture them as PETA accused," he said, while giving his monkey some yogurt to drink.

PETA says its investigators visited eight farms where macaques are used to pick coconuts -- including those for Thailand's major coconut milk producers, Aroy-D and Chaokoh -- as well as several monkey-training facilities.

"At each one, they documented that these sensitive animals were abused and exploited, " PETA said, adding that the "terrified young monkeys...are kept chained, abusively trained, and forced to climb trees to pick coconuts that are used to make coconut milk, meat, flour, oil and other products." 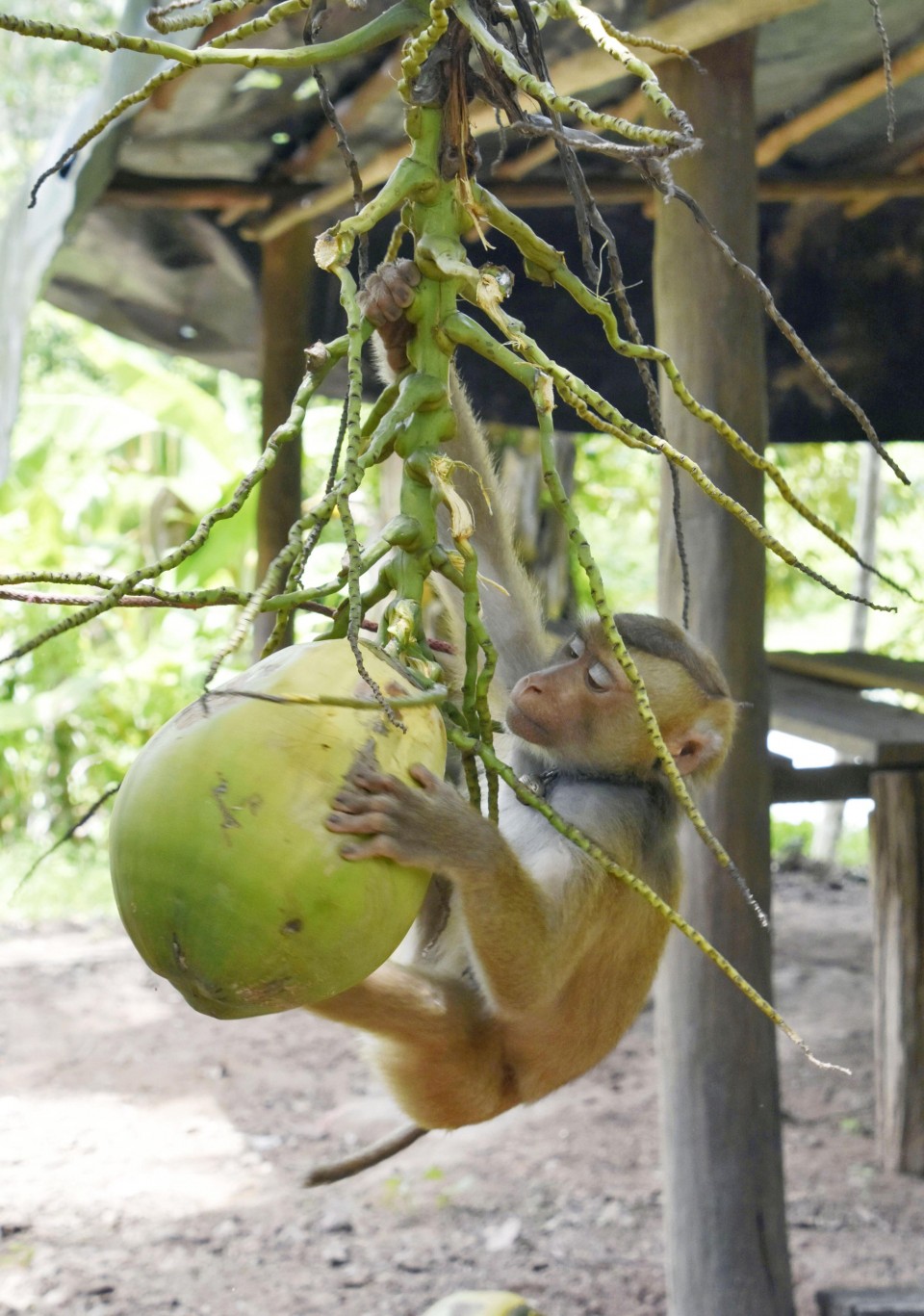 A monkey is trained to harvest coconuts in Chumphon, Thailand, on July 11, 2020. A U.S. animal protection organization has leveled an accusation that monkeys Thai farmers use to harvest coconuts are abused, causing supermarkets in Britain to stop selling Thai coconut products. (Kyodo)

"Tethered by the neck with a metal collar, the monkeys are forced to climb up and down trees and collect up to 1,000 coconuts per day" it said, adding that by being denied the freedom to move around and socialize with others, "these intelligent animals slowly lose their minds."

Some have even had their canine teeth removed, it alleged.

Somboon argued that the traditional practice of using monkeys to harvest coconuts is no different from the way that other countries "use any kind of animals to help them work."

"If PETA accuses us of torturing the animals, they should look back to their country first, what they do to animals," he lamented.

PETA has invited any Thailand-based coconut companies to provide evidence that they do not use forced monkey labor.

Thailand is the world's largest producer of coconut milk, but its government insists monkey labor is hardly ever used anymore to harvest coconuts for commercial products.

According to the Commerce Ministry, there are 15 large-size coconut factories in Thailand. Of the nine of them belonging to the Processed Foods Association, which together account for 90 percent of the total exports of processed coconut products, their coconuts are harvested by other means.

This is because at industrial-scale plantations where coconuts are grown for their water, shorter trees are used, enabling humans to harvest them using a long bamboo stick or a pole pruner.

Yet coconuts harvested to produce coconut milk come from older, taller palm trees, some of which may exceed 20 meters in height, so monkeys tend to be utilized.

Jintakarn Promsuwan, 59, vice president to Chumphon Coconut Farmers Association, said using monkeys to harvest coconuts is an age-old practice and not an abusive one, especially since they naturally like to climb up trees.

"Coconut farmers who own monkeys have not tortured them as alleged. We can prove it and always welcome anyone for a fair exploration," he said.

On PETA's allegation that monkeys are overworked in addition to being mistreated, he insisted they only climb around 20 trees a day and are given rest time in between -- even holidays sometimes.

In the past, humans also scaled coconut trees, but some fell and died or were badly injured, he said, while noting that macaques are not only good climbers, but they instinctively know which coconuts are ripe for picking.

Jintakarn said coconuts are one of the top three economic crops for Chumphon where many farmers now face trouble in the wake of the PETA's "one-sided" allegations, he notes.

According to government statistics, Thailand exported 12.3 billion baht ($390 million) worth of coconut milk last year. It has more than 163,000 coconut farmers and over 335,000 acres of land under coconut cultivation, of which 38,450 acres are in Chumphon.

Saneh Kongsuwan, 46, president of an association of macaque trainers, says that captive monkeys are legally protected in the sense that each owner must be certified by the Department of National Parks, Wildlife and Plant Conservation.

To get that certification, they must commit to follow nine regulations, which include taking good care of the macaques and allowing the occasional snap inspections by officials. 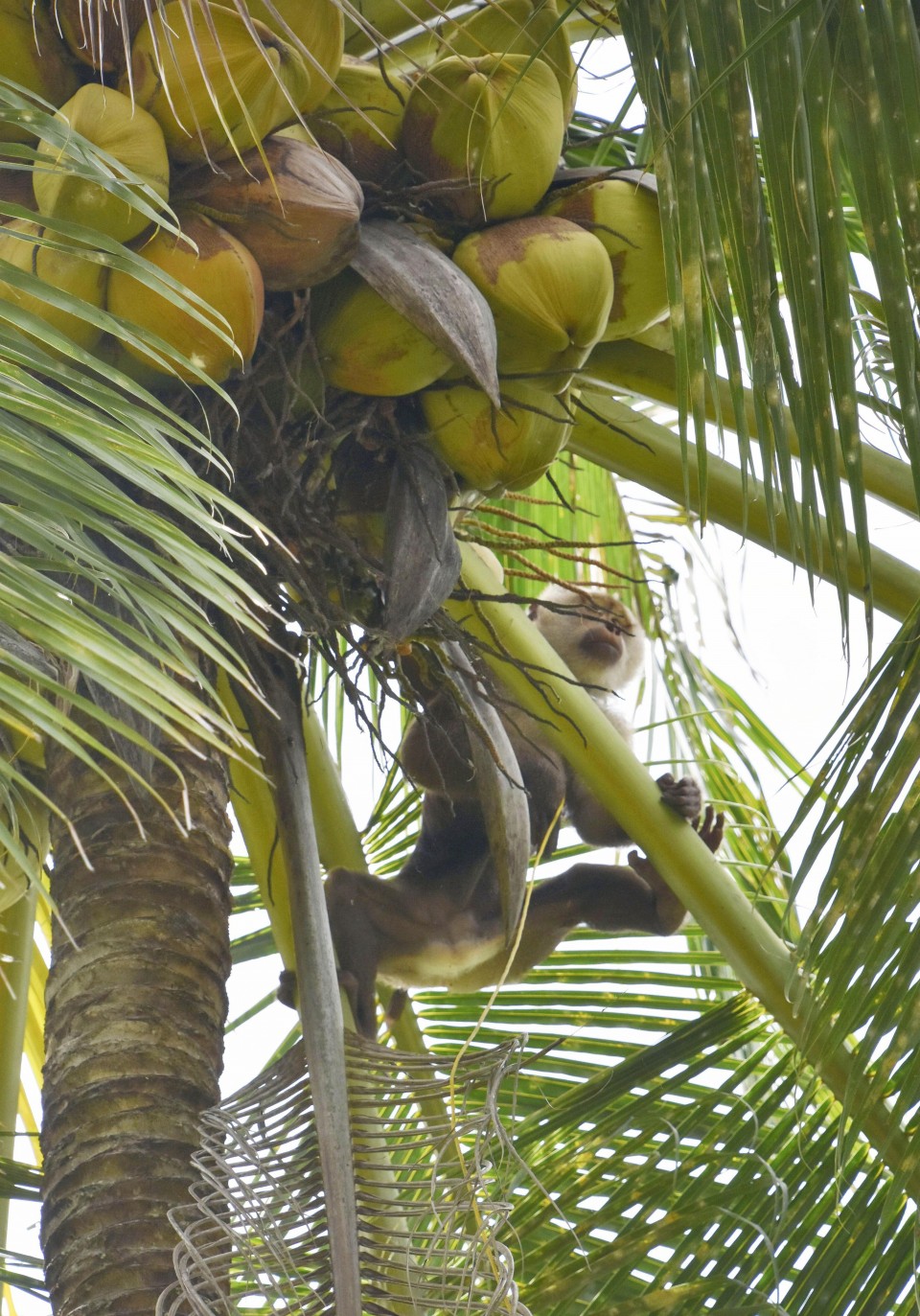 A monkey harvests coconuts in Chumphon, Thailand, on July 11, 2020. A U.S. animal protection organization has leveled an accusation that monkeys Thai farmers use to harvest coconuts are abused, causing supermarkets in Britain to stop selling Thai coconut products. (Kyodo)

According to Saneh, the working-age of macaque is between 3-8 years, though their average lifespan is about 15-20 years. Even when they "retire," they are still cared for as part of the family.

Somjai Nimmakul, 42, whose four monkeys have helped sustain his family's way of life, said, "I love them as my family members."

"We bond with them. I raise them with my sons. They grow up together. We feed them milk, fruits, snacks, and play together."

"Our monkeys are fed three meals a day. They stay under the roof of their own house, not left out in the open as accused."

Somjai said macaques are very clever, so if they were abused as alleged, they would not work as well or be friendly with their owners, so it only makes sense to treat them with kindness and care.