Japan started Wednesday to require convenience stores, supermarkets, drugstores and other retail outlets to charge for plastic shopping bags, in line with a global trend of reducing plastic waste to combat marine pollution.

The initiative is aimed at encouraging shoppers to bring their own bags and comes as Japan lags behind other countries in curbing the use of plastics, generating the largest amount of plastic waste per capita after the United States.

But environmental experts have already questioned the significance of solely targeting plastic shopping bags since they account for just an estimated 2 percent of an annual 9 million tons of plastic waste generated in the country. 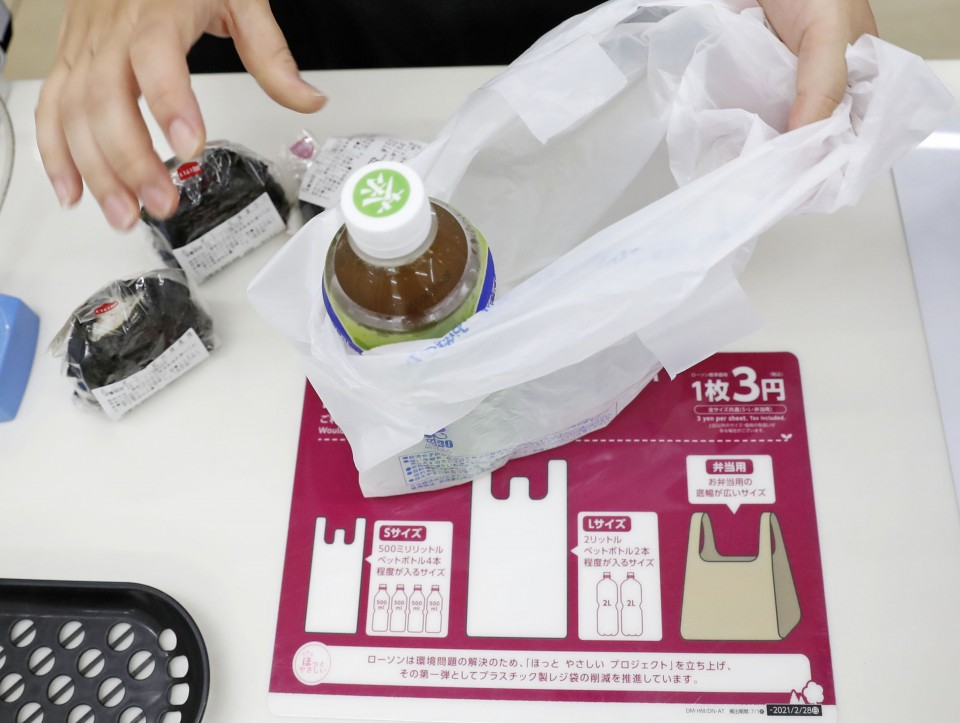 Photo taken at a convenience store in Tokyo on July 1, 2020, shows a sign explaining charges for plastic bags. Plastic bag fees became mandatory in Japan on the same day to promote the use of eco-friendly bags and reduce plastic waste. (Kyodo)

The coronavirus outbreak may also make consumers reluctant to use the same shopping bag each time out of sanitary concerns, and more willing to pay for store-provided ones.

Retailers were divided over whether to charge for plastic bags or continue offering free bags that use environmentally friendly materials, which are exempt from the government's regulation for compulsory charging.

Bioplastic bags containing 25 percent or more of plant-derived materials, as well as reusable bags that are 0.05 millimeter thick or more, are not covered by the regulation.

"I understand that it is a measure to protect the environment but it is bothersome to bring a bag every day," said a 39-year-old male company employee who bought rice balls and a drink at a Lawson shop in Tokyo and put them in a bag he brought.

Secoma Co., operator of Seicomart convenience stores located mainly in Hokkaido in northern Japan, meanwhile, decided to continue offering free bags that are exempt from the regulation to ease the burden on consumers for the time being amid the coronavirus pandemic.

"I'm thankful for (Secoma's approach) because I don't carry around a bag when I shop at a convenience store," said Rikako Shirakawa, a 43-year-old call center employee at a Seicomart store in Hokkaido's prefectural capital Sapporo.

Another company employee Eri Honda, 44, from Sapporo, said she has been carrying her own shopping bag for a few years, ever since she became aware of the issue of plastic waste. "I am concerned about environmental issues. I want to start tackling them by doing what I can."

The Japanese government included the mandatory plastic bag charging in its environmental policy package in May 2019, shortly before its hosting of the Group of 20 major economies' summit in Osaka, where plastic waste was on the agenda.

The government had come under international criticism for not signing the Ocean Plastics Charter aimed at making all plastics recyclable by 2030 at the Group of Seven summit in Canada in 2018, citing the "impact on economy and society." The United States was the only other G-7 member that did not sign the pact.

China, Britain, France and South Korea are among countries which have started charging for plastic shopping bags. Some foreign countries have also expanded the scope of plastic regulations beyond shopping bags to plates and straws. 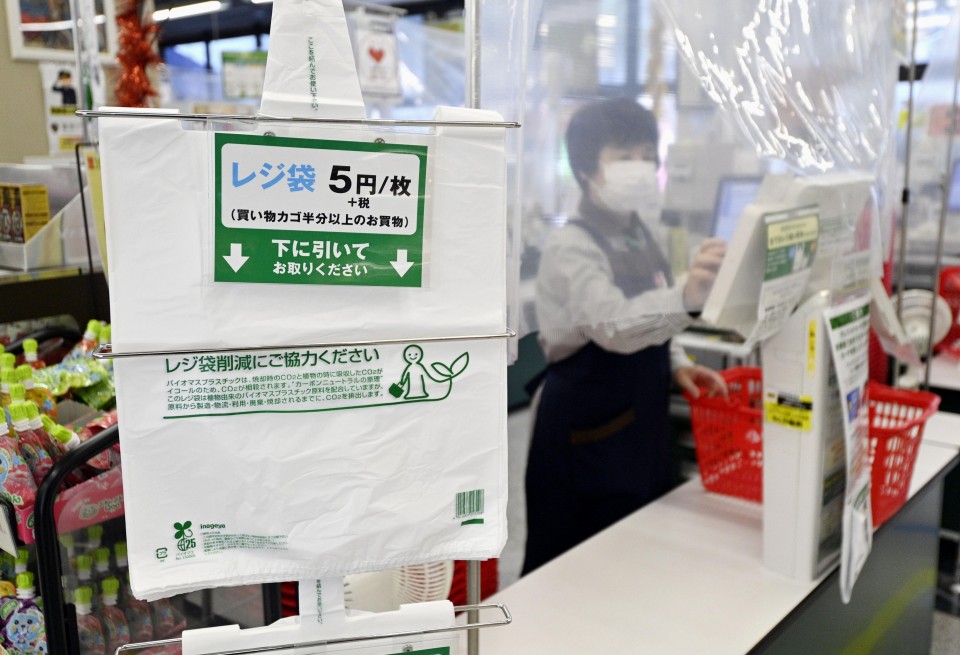 Photo taken June 30, 2020, shows a supermarket notice about a 5 yen charge for plastic bags in Tokyo. Plastic bag fees are to become mandatory in Japan on July 1 to promote the use of eco-friendly bags and reduce plastic waste. (Kyodo)

"Compared to other countries, Japan has made a slow start in reducing plastic waste and struggles to get public support due to the lack of a clear, long-term vision" over plastic waste reduction, said Evonne Yiu, a researcher at the United Nations University Institute for the Advanced Study of Sustainability in Tokyo.

"Consumers are not sufficiently aware about the overall waste situation in Japan and why the government is introducing a mandatory charging policy," Yiu said. "The focus seems to be more on purchasing of eco-friendly bags and other alternatives to plastic bags."

She said Japan should not limit its regulatory steps to plastic bags but should start debating reduction and reuse of other disposable plastic products, such as bento lunch boxes, straws, bottles and food packages.

A U.N. Environment Programme report has also warned against the use of bioplastic and biodegradable bags that are considered substitutes to plastic shopping bags, saying they still lead to global warming.

Biodegradable bags produce carbon dioxide when burnt, while bioplastics can become sources of methane gas emissions when buried in the ground, the report says.

Over 8 million tons of plastic waste is estimated to flow into the oceans every year and cause microplastics pollution, in which tiny pieces of degraded plastics absorb harmful chemicals and accumulate inside fish, birds and other animals as they make their way up the food chain.

Japan was responsible for the largest amount per capita after the United States, according to data from UNEP, producing some 9 million tons of plastic waste annually. Some 4 million tons were disposable items such as bottles for beverages, packaging materials and containers.