Finance chiefs from the Group of 20 major economies said Sunday that the global economy is expected to "contract sharply" this year due to the new coronavirus pandemic and pledged to do whatever they can to minimize downside risks.

"We are determined to continue to use all available policy tools to safeguard people's lives, jobs and incomes, support global economic recovery, and enhance the resilience of the financial system," although the economic outlook "remains highly uncertain," they said in a statement issued after a videoconference.

As for the G-20's debt relief program to help curb the spread of the virus, the finance ministers and central bank governors said an estimated total of $5.3 billion has been requested to be deferred as of Saturday by 42 developing countries.

While welcoming the "progress achieved" under the program, the G-20 countries said, "All official bilateral creditors should implement this initiative fully and in a transparent manner."

To support developing countries to take steps to stem the spread of the virus, the G-20 nations said at the previous virtual meeting in April that they and "Paris Club" countries -- traditional lenders to developing countries such as the G-7 nations -- had agreed to suspend debt payments by "the poorest countries" from May 1 through the end of this year.

Amid mounting concern about capital outflows from emerging economies, the G-20 nations said in the latest statement that a "possible extension" of the debt relief program will be considered in the second half of this year, taking account of developments of the COVID-19 pandemic.

The total of the 59 lowest-income countries' outstanding obligations to China, against the sum of their gross domestic product, was 11.6 percent in 2016, about four times as much as that owed to Paris Club nations, according to an International Monetary Fund report in 2018. 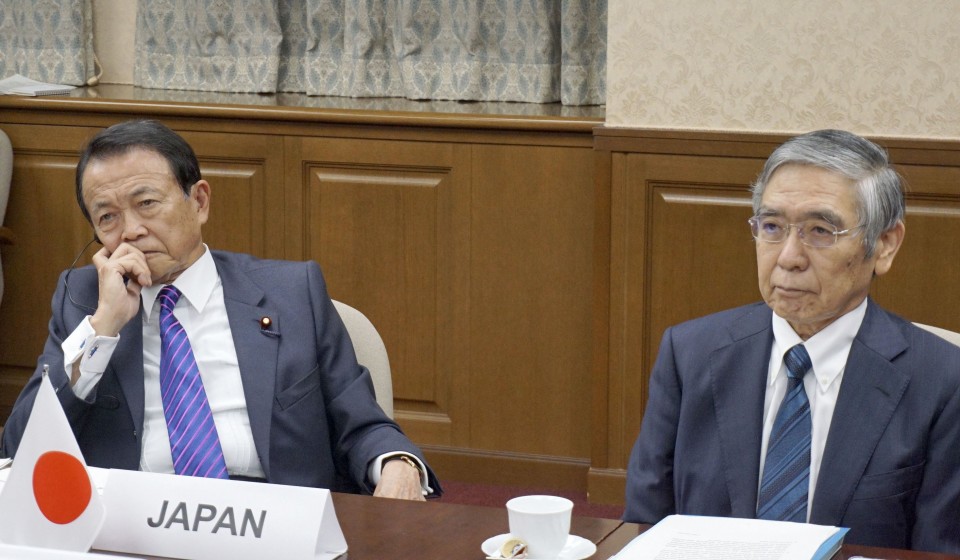 Japanese Finance Minister Taro Aso and Bank of Japan Governor Haruhiko Kuroda join a videoconference of the financial chiefs of the Group of 20 major economies on July 18, 2020. (Kyodo)

The G-20 also discussed new international taxation rules on major digital companies such as Google LLC, Facebook Inc., Apple Inc. and Amazon.com Inc., amid claims they have not been paying their fair share of taxes.

The finance chiefs said they will continue talks on the rules aiming to narrow differences and maintain their "cooperation for a globally fair, sustainable, and modern international tax system."

The videoconference came amid growing uncertainty over a global economic recovery from the virus impact as the number of COVID-19 patients across the world shows no signs of waning. The figure has topped 14 million cases, according to a tally by Johns Hopkins University.

In reports released last month, the IMF said it projected the world economy to contract by 4.9 percent this year, while the World Bank forecast a 5.2 percent shrinkage, with the pandemic triggering the worst global recession since the Great Depression in the 1930s.

The G-20 finance chiefs were originally to hold a two-day meeting from Saturday in Jeddah, Saudi Arabia, but it was switched to a half-day teleconference due to the pandemic. The next talks are scheduled for Oct. 15 to 16 in Washington on the sidelines of the IMF and the World Bank Group's annual fall gatherings.